The Aβ42 peptide may self-aggregate to form fibers with a structure profoundly different from those made of its less pathogenic cousin Aβ40. So suggests a cryoelectron microscopy (cryoEM) study—the first reported for Aβ1-42—in this week’s PNAS Early Edition. In contrast to structural studies of Aβ1-40 that have predicted a tight arrangement of protofilaments in mature fibers, the new model describes Aβ1-42 fibers as pairs of loosely connected protofilaments snaked around a hollow core. “There might be a weak link in this seemingly impenetrable molecule,” said neurologist Jin-Moo Lee of Washington University School of Medicine, St. Louis, Missouri, who led the new research. If fibrillar Aβ42 “is in fact a toxic species, then this is a potential site where we might disrupt the fibril,” Lee said. The authors and other scientists caution, though, that differences in growth conditions for the various Aβ species make it hard to directly compare structural studies of Aβ1-40 and Aβ1-42. The relevance of synthetic Aβ fibril structures—the kind used here—to Alzheimer disease also remains to be seen.

Because Aβ fibers are such monstrous assemblies that crystallize poorly, scientists have turned to cryoEM to probe their fine structural features. CryoEM allows analysis of large molecules in their native state, albeit at lower resolution than other methods such as X-ray crystallography and nuclear magnetic resonance (NMR). Most structural studies of fibrillar Aβ have focused on those made of Aβ1-40 peptides. Though less abundant than Aβ1-42 in amyloid plaques, Aβ1-40 peptides can more easily assemble into fibrils in the lab. According to a recent cryoEM study by Niko Grigorieff of Brandeis University, Waltham, Massachusetts, and Marcus Fändrich of Max-Planck Research Unit for Enzymology of Protein Folding in Halle, Germany, Aβ1-40 peptides assemble into protofilaments that pack tightly in pairs to form mature amyloid fibrils (Sachse et al., 2008).

Several years ago, a team led by Roland Riek at the Salk Institute for Biological Studies in La Jolla, California, managed to sneak a peek at the more unruly Aβ42 peptide. Using a combination of NMR, mutagenesis, and cryoEM, the researchers revealed a critical Aβ42 feature—a hairpin turn connecting the two β strands of residues 18-42 (see ARF related news story and Lührs et al., 2005). “What we’re contributing here is a more global model,” Lee said. “We looked at the fibril itself, not the stacks of Aβ within the fibril.”

Teaming up with biochemist Carl Frieden, also at Washington University, and cryoEM expert Wah Chiu at Baylor College of Medicine in Houston, Texas, Lee, first author Rui Zhang, and colleagues determined the three-dimensional structure of fibrils made from soluble human synthetic Aβ1-42. Each consisted of two intertwined protofilaments, as was seen for Aβ1-40 fibrils. Individual Aβ1-42 fibrils had quite a bit of structural variability—some were tightly twisted, whereas others adopted a looser configuration. The researchers categorized the fibrils into six groups according to helical periodicity, or pitch length, ranging from 400 to 650 angstroms. They used hundreds of overlapping images in each group to construct density maps, then averaged those to create the final structure.

“What's surprising is that this model of the Aβ1-42 fibril looks very different from the Aβ1-40 fibril,” Lee told ARF. The Aβ1-40 models “don't have this hollow core that we see.” The new model suggests that the two Aβ1-42 protofilaments forming the long, tube-like structure are themselves loosely connected. “We think this interaction is a little slippery,” Lee said. The protofilaments “slide a little so some fibrils can be tighter than others.” Furthermore, he said the NMR hairpin model by Riek and colleagues fits nicely within the spatial parameters of the cryoEM map, providing a measure of confidence in the new reconstruction. 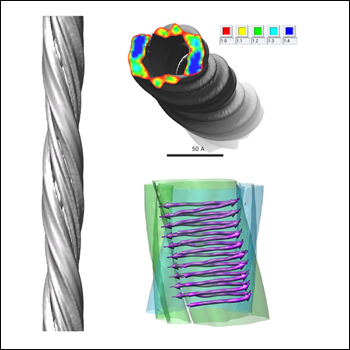 Not a Rope, But a Tube
According to a new cryoelectron microscopy model, Aβ1-42 fibrils adopt a long, helical structure (left) with a hollow core delineated by two loosely connected protofilaments (top right). The fibril structure (bottom right) accommodates a stack of 10 Aβ1-42 molecules with the hairpin predicted by earlier NMR studies. Image credit: Rui Zhang and Wah Chiu

However, some scientists noted that the fibril growth conditions in the new study could make the findings hard to interpret. Lee’s team synthesized the Aβ1-42 fibrils by incubating pure peptide at 37 degrees C for four weeks at pH 2.0. “Incubation at strongly acidic conditions and for a prolonged time is generally known to lead to peptide fragmentation or other covalent modifications,” Grigorieff and Fändrich wrote in an e-mail to ARF. “Therefore, it is possible that the analyzed fibrils differ quite substantially from the ones that are present in Alzheimer patients and that are formed, of course, under physiologically relevant pH conditions.” (See full comment below.) By comparison, the Aβ1-40 fibrils used in previous (Sachse et al., 2008) and more recent structural studies by these researchers (Meinhardt et al., 2009) and others (Paravastu et al., 2008) were produced by incubating peptide at pH 7-9 for several days at room temperature or 4 degrees C.

Lee agrees that growth conditions likely influence fibril morphology. However, he noted that the new model “is not that different from some other (non-Aβ) forms of amyloid. There's some kind of theme underlying some of this,” he said. “SH3 peptide also has two forms of protofilaments surrounding a hollow core (Jimenez et al., 1999).”

Whether the fibril structures predicted in the new study are relevant to AD remains unclear at this point, suggested Rob Tycko of the National Institutes of Health, Bethesda, Maryland. In an e-mail to ARF, he wrote, “…the Aβ1-40 peptide (and possibly also the Aβ1-42 peptide) can probably form five or six different fibril structures. It will be interesting to identify the structure or structures that develop in the human brain.” (See full comment below.)

It is also intriguing to speculate as to whether the Aβ morphological variations might correlate with pathogenicity, noted Huilin Li of Brookhaven National Laboratory, Upton, New York, who uses cryoEM to probe the inner workings of γ-secretase (see ARF related conference story). “As Aβ fibers are highly heterogeneous and polymorphic, it will be interesting to find out whether the structural differences observed in these studies merely reflect the peptide constituents (i.e., Aβ40 versus Aβ42) of the particular species of fibers selected for 3D reconstruction, or whether the structural differences represent a true defining feature of two functionally different peptides (i.e., Aβ40 is significantly less toxic than Aβ42),” wrote Li in an e-mail to ARF. (See full comment below.)

Such considerations could turn out to be moot if Aβ fibrils are not in fact the primary toxic species in AD. This idea has gained traction in recent years with accumulating evidence that disease progression may track more closely with soluble Aβ oligomers than with insoluble deposits. With this in mind, Edward Olejniczak of Abbott Laboratories in Abbott Park, Illinois, and other researchers there and at Abbott GmbH in Ludwigshafen, Germany, have used solution NMR to determine the structure of oligomers made from synthetic Aβ and fatty acids. These soluble “globulomers” appear to be relevant in vivo (see ARF related news story and Barghorn et al., 2005). According to the authors, company policy precluded a phone interview about this published work, but Olejniczak told ARF via e-mail that ongoing preclinical studies with these globulomers will guide future immunotherapy trials. Based on the structural NMR data, Olejniczak, first author Liping Yu, and colleagues have engineered a disulfide bond into their Aβ globulomer to create a stable new antigen that can be therapeutically targeted independent of fibrillar forms. The work appeared online 13 February in the journal Biochemistry (Yu et al., 2009).—Esther Landhuis