Neuroscientists are reaping the benefits of new technological advances in image processing. “The old strategy was to take 40 to 50 images of different regions of the brain at high magnification and then piece them together manually, like a mosaic, to get the full view,” said Ahmad Salehi of the Palo Alto Veterans Affairs Health Care System in California. “This process can now be done automatically,” he said. Salehi used a method called automatic stitching to zoom in on the dentate gyrus—a part of the hippocampus that is affected in both Down’s syndrome and Alzheimer’s disease—and assemble a detailed picture. “We have been focusing on this region as a target for possible therapies for a while,” he told ARF (Millan Sanchez et al., 2012).

The image below (which was chosen for the cover of the March issue of Biological Psychiatry) shows the hippocampal region from the Ts65Dn mouse model of Down's syndrome, stained by the standard Golgi method to visualize neurons and viewed by light microscopy. Using these types of images, Salehi and colleagues are analyzing the neurons in detail to determine how they are organized and to gain insight into the disease process. A fundamental question is whether the dysfunction of dentate gyrus neurons in Ts65Dn mice is due to degeneration and loss of these neurons themselves, or to the loss of inputs from other regions that project to the dentate gyrus—a process called “de-afferentation” (Millan Sanchez et al., 2012). After using a batch processing program to convert and resize the images taken from a single slice of the hippocampus, a computer program determined how the tens of images obtained fit together by matching the edges of one to another. “If there is any overlap between images, the computer deletes it so that the final image looks completely seamless,” said Salehi. “This allows you to have amazing details on the structure of affected neurons even at low magnification. The high-resolution images collected using this method would allow one to study any region of interest for morphometrical analysis and/or densitometry in relationship to the rest of the brain” he added. 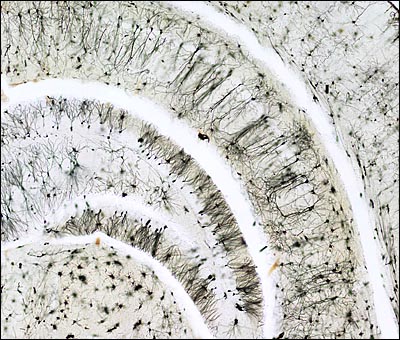 The Hippocampus and Neighboring Regions
Computer-based automatic stitching assembles 34 high-resolution images of the hippocampus of the Ts65Dn mouse model of Down’s syndrome into one big picture. Image credit: Ahmad Salehi

Using another imaging technique, Salehi creates two-dimensional renderings of three-dimensional brain structures, again making use of computer automation. When researchers take images of the brain, some details will inevitably be out of focus and others in focus, depending on how deeply positioned they are in the tissue. This problem can be overcome by taking a video using depth-of-field correction. The video typically generates 30 frames per second, allowing a computer program to sort through and pick out elements that are in different focal planes. “Imagine taking photos of 10 people, and some are close to and some far away from the camera. If you take a video of the whole scene, a computer could then go through frame by frame and determine that person 1 is in focus in frame 3, so it takes that image; person 2 is in focus in frame 5, and so on. The final image has very rich detail,” explained Salehi. “Although the final analysis of objects of interest would certainly be more accurate to be performed in live 3D images, the current method would significantly speed up the process of scanning the whole slice to find the most interesting region for further analysis” he added. These techniques are not new, but automation and growing computing power is making it much faster and easier for researchers to incorporate them in routine studies.—Laura Bonetta and Tom Fagan.