Depending on how you look at it, the brain-residing activated microglia observed in Alzheimer disease could be the good guys, clearing amyloid-β (Aβ) aggregates, or the bad guys, promoting inflammation (see ARF related news story and ARF news story). But new results make it clear that good or bad, microglia are not the only guys going after Aβ. In a paper scheduled for publication in the June Journal of Alzheimer’s Disease, Milan Fiala and colleagues at UCLA show that macrophages originating from the blood can enter the brain and gobble up amyloid peptides. Intriguingly, macrophages isolated from the blood of AD patients are less effective at clearing Aβ than those from unaffected individuals. The results suggest that controlling Aβ levels involves a systemic immune response, one that may be out of whack in AD patients.

But while macrophages or microglia are pros at vacuuming up and disposing of extracellular neurotoxic deposits like amyloid, what chance does the immune system have against intracellular foes like mutant α-synuclein, which causes Parkinson disease? A fighting chance, as it turns out. Eliezer Masliah, of the University of California in San Diego, Dale Schenk, of Elan Pharmaceuticals, and their colleagues report in today’s Neuron that antibodies to α-synuclein enhance clearance of the protein in transgenic mice expressing human α-synuclein. The vaccine also protects the mice against synaptic loss.

For Fiala and colleagues, the starting point was their previous work showing that macrophages can enter the brain through breaks in the blood-brain barrier. They found, using autopsy tissue, that macrophages infiltrate Aβ plaques, and contain phagocytosed Aβ (Fiala et al., 2002). From these results, they hypothesized that the build-up of Aβ in AD might result from failure of the innate immune system to clear the protein. In the new study, they demonstrated that macrophage infiltration of the frontal lobe and hippocampus occurred in sites where neurons were expressing the chemokines RANTES and IL-1β, but they saw no correlation between the number of macrophages in an area and the plaque burden. This made the researchers wonder if the macrophages in AD brains might be deficient at clearing Aβ.

To answer this question, they isolated monocytes from blood samples from 17 living AD patients and 16 age-matched controls. When the investigators cultured peripheral blood cells from healthy subjects with Aβ, the monocytes stained brightly for the peptide, while cells from AD subjects showed significantly lower staining. After 1 to 3 weeks in culture, the normal monocytes differentiated to macrophages and showed a strong uptake of Aβ into vacuoles resembling lysosomes, followed by clearance of the peptide. In contrast, cells from AD patients exposed to Aβ showed some surface staining only, followed by cell rounding and apoptosis.

This apparent defect in innate immune function in AD subjects was accompanied by increased expression of markers of systemic immune activation, including HLA-DR and COX2, in blood neutrophils. In a smaller sample of five AD subjects and eight controls, Fiala et al. showed that T cell cytokines were also dysregulated. Levels of IL-10, a potent inhibitor of macrophage function, were increased, for example.

The authors conclude that Aβ clearance from brain is not solely the job of microglia—macrophages recruited from the periphery also participate. Their model suggests the macrophages (and perhaps also microglia) can be the good guys and the bad guys. “In normal subjects, monocytes/macrophages (MMs) migrate and phagocytize Aβ at a physiological pace and thus forestall accumulation of Aβ. Thus, physiological innate and adaptive immune responses to Aβ are beneficial in clearance of Aβ, but, in pathological states either due to overproduction of Aβ (familial AD) or deficiency of Aβ clearance (sporadic AD), the detrimental effects and lack of beneficial effects tilt the balance to neuronal pathology,” they write. The failure of AD macrophages to clear Aβ would also contribute to tipping the balance toward harmful inflammation.

Efforts to rally the immune system via immunization to clear Aβ have stimulated efforts to develop vaccines against other neurodegenerative diseases. The latest attempt finds Masliah and colleagues challenging mice transgenic for human α-synuclein with a recombinant α-synuclein vaccine. The mice gave robust antibody response, and showed a reduction in synuclein-containing inclusion bodies in the temporal cortex. Immunization decreased α-synuclein levels in presynaptic nerve terminals, and reversed the loss of synaptophysin-labeled nerve terminals that occurs in synuclein transgenic mice. 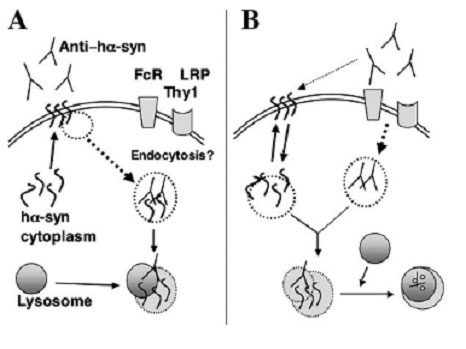 Two possible mechanisms for antibody-mediated neutralization of cytosolic proteins
In one (A), enough of the cytosolic protein is present at the surface of the cell to bind circulating antibody. The antigen-antibody complex is then degraded following uptake by lysosomes. In the second (B), the antibody is first internalized via cell surface receptors, then binds to the cytosolic protein and carries it to the lysosomes for degradation. [Image courtesy of Masliah et al. 2005/Neuron]

It’s easy to picture how immunization can result in the clearance of extracellular proteins like Aβ, but how does it work on synuclein, a predominantly intracellular protein? Under pathologic conditions, it turns out, oligomers and protofibrils of synuclein are found in the membrane (see for example Dixon et al., 2005 and Eliezer et al., 2001). The researchers showed that the vaccine-elicited antibodies reduced membrane-localized aggregated synuclein, probably by targeting it for lysosomal degradation. The disappearance of synuclein did not seem to involve uptake by other immune cells, since they saw no sign of infiltration by lymphocytes and only mild microglial activation after immunization. The immunized mice showed only a mild inflammatory response to the vaccine, the same as adjuvant controls. These results, together with a recent report of a DNA vaccine strategy to hit the huntingtin protein (Miller et al., 2003) suggest that immunotherapy could be widely applicable to a growing range of neurodegenerative diseases.—Pat McCaffrey.