Since they first observed neurogranin in the cerebrospinal fluid (CSF) of Alzheimer’s disease patients, researchers have suspected that the synaptic protein may be a useful surrogate for measuring synapse loss in the brain. Now, a paper published September 15 in Brain reports that CSF neurogranin correlates with glucose hypometabolism and hippocampal atrophy, markers of neurodegeneration. The findings follow hot on the heels of a report linking CSF neurogranin to impending cognitive decline (see Sept 2015 news). 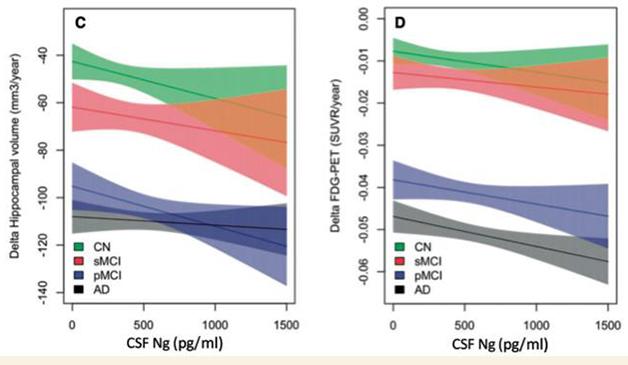 Erik Portelius and colleagues at University of Gothenburg, Sweden, used their in-house immunoassay to measure CSF neurogranin levels in a well-characterized cohort from the Alzheimer’s Disease Neuroimaging Initiative (ADNI). It included 95 people with AD, 173 with mild cognitive impairment, and 110 cognitively healthy controls. Participants were followed clinically for six months or more, and were repeatedly scanned by FDG-PET and MRI over a period of six months to nine years.

“In CSF neurogranin, we now have an independent marker of synaptic integrity, which previously has been very difficult to assess in living patients,” said Portelius. He added that the link between neurogranin and brain imaging measures needs to be replicated in other cohorts, particularly in large preclinical populations.

Maartje Kester, VU University Medical Center, Amsterdam, who was not involved in this study, noted that its neurogranin results align with those reported by her group earlier this week (Kester et al., 2015). Studying the Amsterdam Dementia Cohort, they found neurogranin levels to be elevated by the MCI stage of AD, possibly earlier, as suggested by the longitudinal increase in CSF neurogranin among those with subjective memory complaint. “Taken together, these results confirm the value of neurogranin as a promising early biomarker reflecting functional decline,” Kester wrote to Alzforum.

Consistent results observed in different cohorts using different assays are encouraging, but even so, questions remain before neurogranin is promoted from “promising biomarker” to being useful for diagnosis and/or prognosis, said co-author Kaj Blennow, also from Gothenburg. “We now need to understand the mechanism behind the increase of CSF neurogranin in AD, and whether it is specific for AD or also occurs in other neurodegenerative disorders that have synapse loss,” Blennow said.—Kelly Dakin