Emboli can be deadly if they clog up a major artery. Blockages in smaller arterioles and capillaries can have serious consequences, too, especially if enough of them occur among the microvessels that keep voracious neurons in the brain fed with oxygen. Recently, researchers at Northwestern University Feinberg School of Medicine, Chicago, Illinois, discovered a novel process that enables the mouse cerebral microvasculature to eliminate tiny blood clots and other debris, such as fragments of atherosclerotic plaques. Extravasation, as the process is called, occurs when the endothelium extends into the lumen of the vessel, envelopes the offending embolus, and then deftly pushes it out through the vessel wall into the brain parenchyma. The clearance mechanism, which rebuilds vessel walls and re-establishes blood flow, probably goes on throughout life as spontaneous occlusions occur in the microvasculature, suggested Jaime Grutzendler, who led the study. The same process, if it occurs in humans, could have important implications for age-related cognitive decline, according to the authors. They found that extravasation does not go as smoothly in older mice, which are more likely to suffer neuronal damage as a result of delayed clearance or irreparable occlusions in cerebral blood vessels. Amyloid-β (Aβ) aggregates could be another wrench in the works. “Cerebral amyloid angiopathy could be a barrier to the process,” suggested Grutzendler.

The extravasation mechanism came as a total surprise to the researchers, who were using high-resolution two-photon, confocal, and electron microscopy to image clearance of small clots and debris in the living mouse brain. Scientists have theorized that most clots are cleared by a combination of fibrinolysis, which breaks up the fibrin that holds blood clots together, and hydrodynamic pressure, which pushes debris through the vessels. This is well known for larger blood vessels, but it was not so clear what happens in microvessels, said Grutzendler. It was also not known how these tiny vessels deal with fragments that cannot be degraded enzymatically, such as small pieces of cholesterol plaque. One theory was that blocked vessels simply died and new ones took their place through angiogenesis. To their surprise, the researchers found no evidence for this.

Instead, what joint first authors Carson Lam and Taehwan Yoo did notice was that microemboli that were injected into the mice turned up on the outside of capillaries. At first, the authors thought this might be an artifact, or the result of vessel rupture or death. “But as we looked much more carefully, we realized it was not just simple rupture but an active mechanism,” said Grutzendler. Their report came out in the May 27 Nature online.

The researchers used a combination of fluorescent microemboli and green fluorescent protein-tagged endothelial cells to study the process. Many microemboli were cleared from small vessels within two hours of injecting them into the carotid artery. But many remained, cutting off blood flow. By two days after injection, Lam and colleagues found some of those emboli outside blood vessels, and by six days post-injection, most of the emboli were no longer in the lumen, but outside.

How does this extravasation work? Time lapse images showed that the vessel endothelium projects inside into the lumen and then surrounds fibrin clots. Sometimes the endothelial projection makes contact with the opposite side of the vessel. The authors speculate that this may help prevent plasma leakage. Once the embolus is enveloped by the endothelial projection, then the original endothelium breaks down, leaving the microemboli on the outside of the recanalized vessel. The process is not limited to blood clots. Cholesterol emboli and synthetic microemboli (polystyrene beads) were eliminated in the same fashion (see images and movie below).

Extravasation of Microemboli
A cholesterol embolus (orange) is eliminated from a cerebral microvessel. On day one, the endothelial layer (green) begins to surround the embolus. By day three, the embolus is completely surrounded by a new endothelial layer (arrow) and the old vessel wall begins to break down (arrowhead). By day five, the embolus has been ejected into the parenchyma and the vessel repaired. For a 3D view, see movie below. Image credit: Jaime Grutzendler and Macmillan Publishers Ltd. (Nature)

• Click on the image below to launch the recording, which may take a few moments to appear. 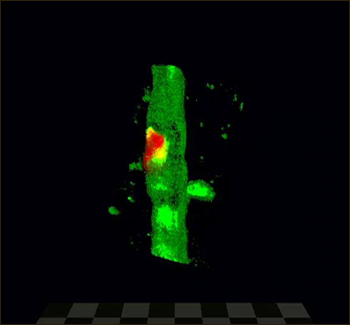 Extravasation in 3D In vivo two-photon microscopy shows a fibrin clot (red) being extruded through an opening in the GFP-labeled microvascular endothelium. The intraluminal side of the clot is completely enveloped by a new endothelial membrane (purple arrowhead). Image credit: courtesy Jaime Grutzendler and Macmillan Publishers Ltd. (Nature)

Using hypoxia as a readout of how efficiently the process works, Lam and colleagues found that older mice seem less adept at extravasation. In four-month-old mice, hypoxia was limited to the endothelium and parenchyma immediately adjacent to microemboli, and it resolved after the vessels recanalized. In 22-month-old animals, extravasation took longer, hypoxia was more widespread and persistent, and nearby tissue sustained damage. Caspase-3, a marker of apoptosis, was activated in vascular cells, and nearby neurons took a hit as well, as evidenced by the appearance of dystrophic neurites.

Mechanistically, it is not clear how the process works, but the authors speculated that since reorganization of the endothelial layer is required, matrix metalloproteinases (MMPs), which break down extracellular matrix proteins, may be involved.—Tom Fagan