Limiting caloric intake by 20 to 30 percent has been found to extend longevity in every creature from yeast to mammals, but can it make humans live longer—and healthier? New findings cast doubt on the former, but support the latter. Writing in the August 30 Nature, researchers led by Julie Mattison at the National Institute on Aging’s Laboratory of Experimental Gerontology, Dickerson, Maryland, summarize a longitudinal study of caloric restriction (CR) in rhesus macaques. Though some of these primates have been on the CR regimen for more than 20 years, they survived no longer than animals eating regular lab chow. If macaques are anything to go by, then caloric restriction may not be the elixir humans are looking for. The story made the front page of The New York Times.

That said, a separate study of macaques, carried out at the University of Wisconsin, Madison, reported that CR did lengthen survival (see ARF related news story). “We are collaborating with the Wisconsin group to understand what the differences are between these two colonies,” Mattison told Alzforum. One important distinction: Controls at the NIA colony are on a specified dietary allotment, whereas those in Wisconsin were allowed to eat ad libitum. That might explain why controls in the NIA study lived longer than their counterparts in Wisconsin. “In a sense, our controls are already calorie restricted,” said Mattison. Ricki Colman, University of Wisconsin, also believes this might be a major factor. She agreed that the NIA study may be akin to comparing calorie-restricted people with people maintaining a normal body mass index, whereas her study compares them to people who become overweight or obese with age.

Does this mean “normal-sized” humans do not stand to gain from restricting calories? Not exactly. In both the NIA and the Wisconsin study, primates on CR diets seemed to live, if not always longer, then at least healthier (see image below). Beginning in 1987, the NIA researchers started two groups of monkeys—35 old, 86 young—on a CR diet. Both showed health benefits. 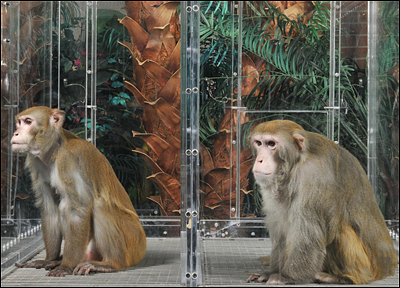 The younger monkeys seemed to gain the most. For example, the researchers have detected no neoplasias in that cohort, while cancer struck six control animals who have since passed away. Curiously, the young animals did not show some of the health benefits seen in animals started on the CR diet later in life. These include healthier serum triglyceride, cholesterol, and fasting glucose levels. None of those benefits increased lifespan, or changed the cause of death in the oldest primates. Cancer, cardiovascular disease, and general deterioration claimed as many CR-fed animals as controls. However, while controls and CR animals died from the same diseases, the data suggest the diseases were diagnosed earlier in the control animals.

“What is important here is not so much the question of lifespan, but healthspan,” suggested Eric Ravussin, from the Pennington Biomedical Research Center, Baton Rouge, Louisiana. “It is clear from these two studies that caloric restriction reduces all the chronic diseases of aging,” he told Alzforum. Ravussin was not involved in either study but has been running a clinical trial of CR in humans (see ARF related news story). Results are expected early next year on a two-year CR study, he said.

The differences between the NIA and Wisconsin studies make for tricky interpretation of CR effects in primates. The type and amount of food, the age CR started, and the general medical treatment of the animals confound the issue. In an accompanying News & Views, Steven Austad, University of Texas Health Science Center, San Antonio, brings still other caveats to the table, including the fact that CR itself may cause death. In both the Wisconsin and young NIA cohort, the calorie-restricted groups had more non-age-related deaths than did controls. “Some of the non-aging-related deaths might be linked to the treatment,” wrote Austad. He also noted that animals that died from non-age-related causes were removed from the analysis in the Wisconsin study. They made up nearly half the deaths, which caused concern about the interpretation of the data.

Both the Wisconsin and NIA groups will continue to study why they came up with different results. “We are still in the early stages of trying to understand the aging process,” said Mattison. “Looking at what gets turned up, down, or otherwise altered during aging may help us design CR mimetics than can reap benefits without the need to dramatically reduce calories,” she said. Austad wondered if calorie restriction simply results in maintenance of a healthy body weight. “Then pharmacological mimicry of such an effect might improve the health of only the fraction of the population that is overweight,” he wrote. Interestingly, all animals in both studies weighed more than monkeys caught in the wild.—Tom Fagan