What makes some areas of the brain more vulnerable to Aβ? A pair of related papers in the September 13 PNAS online, from research groups led by Marcus Raichle and Mark Mintun at Washington University in St. Louis, Missouri, offer a clue. These scientists found that the same regions that accumulate Aβ in AD brains are distinguished in healthy young adults by their distinctive energy metabolism. Instead of burning glucose down to its end products—carbon dioxide and water—these regions make extensive use of glycolysis. This is a glucose metabolic pathway that produces less energy, but does it faster than going all the way through with oxidative phosphorylation, which was formerly thought to be the prevailing pathway from glucose in the brain. The results suggest a link between patterns of energy use in the brain and later vulnerability to Alzheimer disease.

“I think the finding is really fascinating, and potentially critical in trying to understand the mechanisms of why amyloid deposits where it does in the brain,” said Reisa Sperling at Brigham and Women’s Hospital, Boston, Massachusetts. She was not involved in the study. “I think it’s a major step forward.”

The researchers found that aerobic glycolysis (i.e., glucose metabolism over and above that explained by oxygen consumption) occurred predominantly in regions of the brain collectively known as the default mode network (DMN). The default mode network is active in resting or daydreaming brains, but dials down its activity during goal-directed tasks. The DMN is critical in multiple cognitive processes, Sperling said, particularly in memory encoding and retrieval. Intriguingly, DMN regions are some of the first to accumulate plaque in AD brains (see ARF related news story and ARF news story on Buckner et al., 2005; and ARF related news story on Buckner et al., 2009). People who carry the ApoE4 risk allele for Alzheimer’s show distinct patterns of brain activity in this network, again suggesting a relationship between metabolism in this area and susceptibility to AD (see ARF related news story on Buckner et al., 2008).

In the first paper, the authors addressed the question of what makes the default mode network special by looking at patterns of glucose utilization in the brain. About 10 to 12 percent of the brain’s glucose supply is used for glycolysis, but little was known about where in the brain glycolysis occurs. In part, this is because glycolysis is difficult to measure. The standard technique for visualizing glucose uptake is FDG-PET, positron emission tomography of a glucose analog in which an F18 isotope of fluoride replaces an oxygen atom to give the analog fluorodeoxyglucose (FDG). However, FDG-PET can’t distinguish between glycolysis and oxidative glucose metabolism, since FDG is not metabolized beyond the first step, which glycolysis and aerobic glucose metabolism share in common. To get around this limitation, first author Neil Vaishnavi compared glucose use to oxygen use and blood flow in the brains of 33 healthy young volunteers. Glycolysis was deemed to be taking place in regions where glucose consumption exceeded oxygen use.

Vaishnavi and colleagues discovered multiple areas with elevated glycolysis, and noticed that these regions corresponded quite well to the default mode network, including the medial prefrontal cortex, lateral parietal cortex, and posterior cingulate cortex, as well as to some additional areas associated with task control processes. The authors confirmed the spatial overlap between glycolysis and the DMN by using blood oxygen level-dependent (BOLD) functional MRI to map the DMN in a subset of their volunteers. Not all participants had the same levels of glycolysis, Mintun said.

Because the DMN is known to be susceptible to Aβ deposition, the authors followed up on their results by looking at the patterns of Aβ deposits in older brains. As reported in the second paper, first author Andrei Vlassenko and colleagues recruited 11 people with AD, and 14 elderly volunteers who were cognitively normal but had elevated levels of amyloid plaques in their brains. Vlassenko and colleagues measured Aβ using PET with Pittsburgh Compound B, and found that Aβ deposition in both groups of participants significantly correlated with the regions of glycolysis in young brains. Intriguingly, this relationship was much stronger in people with AD than in the cognitively normal volunteers who had amyloid deposits, suggesting a link between glycolysis and the development of AD, or even a partial explanation for why some people appear to be able to tolerate brain amyloid deposition for longer than others (see figure below). 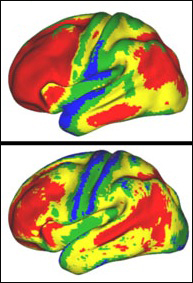 “This gives us a different way to think about how amyloid plaques start and grow,” Mintun said. “While this [result] in itself does not suggest a pathway for preventing amyloid plaques, it does give us some interesting ideas to pursue.” One key question, he said, is what distinguishes people who develop AD from those who don’t. “Are the people who developed plaques the ones who had the most extreme glycolysis?” Mintun said the scientists will explore this question by looking at glycolysis patterns in middle-aged adults to see if individual variations in glycolysis levels correlate with the formation of plaques. Another fruitful approach will be to investigate if this relationship between glycolysis and Aβ occurs in mouse models of AD, Mintun said, and if so, to use these models to explore the mechanisms behind the phenomenon.

Sperling finds the mechanistic questions particularly compelling. “What is it about the default mode network that requires aerobic glycolysis?” she asked. It’s not as simple as high energy demand. As Mintun and colleagues point out in the papers, the visual cortex sucks up high amounts of glucose, but it does not show much glycolysis, nor is it susceptible to Aβ deposits. Instead, Sperling said, the DMN may have a need for the very fast energy supply provided by glycolysis. “There’s evidence that this network has to modulate very rapidly when you are learning something new,” she said. The DMN also consists of regions that are highly interconnected, Sperling said, and perhaps there is something about maintaining this connectivity that is metabolically demanding.

Mintun and colleagues suggest several other hypotheses. Glycolysis might have a role in synaptic plasticity, for example, by rapidly providing a local energy source for membrane pumps that are critical in AMPA receptor turnover (see Zhang et al., 2009). Another possibility is that incomplete glucose metabolism provides small carbohydrates and derivatives needed for cellular proliferation and extension of axons and dendrites. In support of this, the authors note that glycolysis is much higher in the newborn brain than in the adult brain, accounting for 35 percent of a baby’s brain glucose use. In the adult brain, glucose metabolites could be important for synapse maintenance. Glycolysis increases during wakefulness and after the brain performs a demanding task, the authors say, implying glycolysis could play a role in learning-induced biosynthesis.

Other scientists see a synaptic connection as well. “In my opinion, this study adds to the evidence that synaptic or peri-synaptic changes are involved in the earliest predisposition to AD,” Eric Reiman of Banner Health in Phoenix, Arizona, wrote in an e-mail to ARF.

Others think that more data are needed before the implications of the new findings are clear. William Powers, at University of North Carolina in Chapel Hill, wonders if the correlation between glycolysis and Aβ deposition is a clue to the pathogenesis of AD, or just an interesting coincidence. To answer this question, Powers suggested using animal models to see if manipulating glucose metabolism affects Aβ accumulation. If so, that would imply a causal link.

Glycolysis may play a role in other neurodegenerative diseases as well. For example, Powers has found that brains with Huntington disease show reduced levels of glycolysis, although not in a regional pattern (see Powers et al., 2007). Because astrocytes are known to use glycolysis to power membrane sodium pumps, Powers said that reduced glycolysis might correlate with astrocyte dysfunction.

Importantly for biomarker and diagnostic work in the AD field, the new findings highlight a limitation of FDG-PET, in that this technique can’t distinguish between aerobic metabolism and glycolysis. Most researchers interviewed for this story felt that this was not a significant problem, and that FDG-PET will continue to be the method of choice for looking at glucose use in the brain. Powers pointed out that the oxygen metabolism studies used to detect glycolysis are quite difficult to perform, and would not be practical for regular diagnostic use.—Madolyn Bowman Rogers