ApoE’s complex links to Aβ pathology have engendered debate about whether modulating this lipoprotein makes for a rational treatment strategy in Alzheimer’s disease. Animal studies show that ApoE, depending on the isoform, either heightens or lowers AD risk from birth, but scientists are unsure if tweaking ApoE later in life will do the same. A report in the November 20 Science Translational Medicine suggests it may. Scientists led by Bradley Hyman, Massachusetts General Hospital, Charlestown, found that introducing the protective human ApoE2 isoform into the brains of older mice cleared amyloid plaques that were already there. ApoE4 had the opposite effect. “By manipulating ApoE, Alzheimer’s disease pathology, at least in mice, can be modified after it has already begun,” Hyman told Alzforum. “Any therapeutic that manipulates ApoE after disease has started would, in principle, be supported by these data.”

Previous studies by David Holtzman's group at the Washington University of Medicine, St. Louis, have suggested that human ApoE4 expression slows clearance of Aβ from mouse brains, while ApoE2 hastens it (see July 2010 conference story). The ApoE4 mice end up with more amyloid, while those with the ApoE2 allele are protected (see Fagan et al., 2002), mimicking the human condition. However, no studies have clued researchers in to whether a change to ApoE initiated in adult animals will affect pathology.

Seeking an answer, first author Eloise Hudry and colleagues injected an adeno-associated viral vector carrying human ApoE isoforms into the lateral ventricles of seven-month-old APPswe/PS1 mice (see Liu et al., 2005). At that age, these animals have rampant amyloid plaques in the brain. Within two months, the virus permeated the cells lining the lateral ventricles, which released human ApoE into the cerebrospinal and interstitial fluid. The protein reached large swaths of the cortex. The mice still expressed their own ApoE, and total levels of the protein rose by about 10 percent. Over the next three months, the researchers monitored the effects of each ApoE allele on Aβ deposition and neurotoxicity.

Compared with the animals that received human ApoE3, those that got ApoE4 generated higher levels of soluble Aβ40 and Aβ42 in their brains and built up more cortical amyloid deposits. In those treated with ApoE2, Aβ levels fell and fewer plaques accumulated (see image below). According to in-vivo two-photon images taken sequentially from the same animal over two months, amyloid plaques formed more quickly in ApoE4-treated animals than in ApoE2-treated animals. 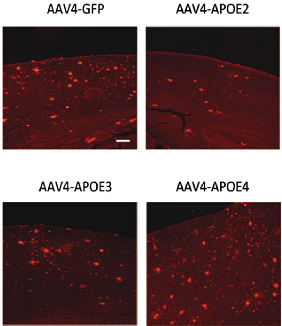 Looking beyond Aβ, Hudry and colleagues examined neuronal changes surrounding plaques. Array tomography, a high-resolution technique that images immunofluorescence staining on ultrathin tissue slices, revealed that synapses degenerated around plaques in ApoE3- and ApoE4-expressing animals more so than in ApoE2 mice. However, synapses looked no different far away from the deposits, suggesting that any synaptic dysfunction resulted from modulation of Aβ.

In addition, more dystrophic neurites formed near amyloid deposits in ApoE4 animals compared with mice expressing other alleles. To verify their results in a second model, the researchers delivered ApoE to the lateral ventricles of 16- to 18-month-old Tg2576 mice, which already contained plaques. After three months, added ApoE4 led to a higher concentration of soluble Aβ oligomers in the interstitial fluid of the hippocampus than did added ApoE2. Animals receiving ApoE4 also built up more plaques.

Together, the data suggest that ApoE isoforms differentially affect Aβ. How? The researchers looked at Aβ production and clearance, which have long been associated with ApoE. Processing of the amyloid precursor protein occurred to the same extent among the treated mice, suggesting that none of the added ApoE isoforms altered Aβ production. However, the researchers saw lower levels of Aβ40 in the plasma of ApoE4- and ApoE3-expressing mice than controls or mice making ApoE2. That indicates these two alleles slow clearance of Aβ into the blood relative to ApoE2, retaining Aβ in the central nervous system.

The authors have no data yet to suggest whether these Aβ changes translate to learning or memory benefits, but Hudry said they will examine that once they have optimized the system for getting ApoE into the brain.

How do these findings relate to therapy? They imply that ApoE2, or small molecules that mimic it, could serve as candidate AD therapies, wrote the authors. Introducing a large molecule like ApoE2 itself into the brain would be difficult, but small molecules that modulate expression of the lipoprotein are being tested in people. Two clinical trials will examine bexarotene, an approved cancer drug that happens to enhance production of endogenous ApoE, boost its lipidation, and clear plaques in mice (see Feb 2012 news story). Gary Landreth, Case Western Reserve University, Cleveland, has initiated a Phase 1b trial to examine the drug’s effect on Aβ production and clearance in healthy volunteers (see May 2013 news story). Researchers at the Cleveland Clinic in Ohio have begun a Phase 2 trial in patients with mild to moderate AD to see if bexarotene reduces their amyloid burden. Meanwhile, the drug’s impact on plaques in mice has become controversial (see May 2013 news story).

If gene therapy based on injection into the brain ventricles ever proved safe for humans, it could deliver ApoE2 to widespread areas of the cortex, suggested the authors. However, Hyman pointed out that whether ApoE diffuses as well in larger animals as it does in mouse brains remains to be seen. The authors also noted that ApoE2 is known to be more lipidated than ApoE3 and ApoE4, and an increased lipidation state could explain the superior influence on plaque clearance in these AD mouse models. Interestingly, bexarotene is known to boost ApoE lipidation of all ApoE isoforms.

“These experiments are done in adult animals, suggesting that if manipulations like this can be done in the adult human brain, one would want to increase ApoE2 and decrease ApoE4 for therapeutic efficacy,” Holtzman wrote to Alzforum in an email. “It will be important in future experiments to increase or decrease expression of human ApoE in mice that only express human ApoE in the absence of murine ApoE to best interpret what one would see in humans.”

Mary Jo LaDu and Leon Tai, University of Illinois at Chicago, commented that the breadth of techniques used in this paper paint a comprehensive picture of how Aβ and plaque pathology relate to ApoE isoforms. LaDu was particularly intrigued by the clear impact ApoE2 had on reversing plaque pathology. “People so often ignore ApoE2 because it’s rare and costly to study,” she told Alzforum. “However, I think we can learn a lot from ApoE2, and here’s the evidence. This type of complex study is critical for understanding the big picture.”

While complimenting the paper overall, Rada Koldamova, University of Pittsburgh, cautioned that the levels of ApoE protein in each of the mouse groups were not identical. Levels of ApoE2 exceeded those of ApoE3, which were higher than ApoE4. “Because of that, I’m not convinced that increasing the level of ApoE4 would be harmful,” she told Alzforum. It could be that drugs that raise levels of any form of human ApoE, including ApoE4, would help clear plaques. She recommended looking within the individual groups to see if levels of the protein correlate with plaque clearance.—Gwyneth Dickey Zakaib