Amyloid-β (Aβ) oligomers are presumed guilty of killing neurons in Alzheimer disease, but that may not be their only transgression. In the muscle-wasting disease inclusion body myositis (IBM), intracellular Aβ-containing deposits pepper the scene of the crime, where the victims are not neurons, but muscle fibers. The parallels to AD are clear: affected muscle tissue is subject to inflammation and deposits of other proteins such as tau, ApoE, and α-synuclein. Three years ago, Masashi Kitazawa in Frank LaFerla’s lab at the University of California at Irvine published a mouse model of IBM, in which APP and presenilin transgenes drive Aβ42 accumulation in muscle cells (Kitazawa et al., 2006). Now, the same researchers report that Aβ immunization can reduce intracellular Aβ deposits and motor dysfunction in the IBM mice. The work, published this week in the Journal of Neuroscience, supports the hypothesis that Aβ oligomers are the toxic force in IBM. The work also holds out hope that Aβ immunization, now in clinical testing for AD, may offer a novel therapeutic option for this currently untreatable disease.

IBM is rare, affecting just 1 to 10 per million people, but it is still the most common cause of muscle degeneration in people over 65. Work over the last decade, most prominently by Valerie Askanas at the University of Southern California in Los Angeles has implicated Aβ accumulation, and in particular Aβ42, as a cause of the muscle loss (Vattemi et al., 2009).

Because the mice showed motor impairment proportional to the level of muscle Aβ42, the investigators wanted to know if removing Aβ42 would affect progression of disease. They immunized the mice with a multivalent Aβ1-33 peptide conjugate, which induced a strong antibody response. After three months of immunization, the mice showed improved motor skills, as indicated by their ability to balance on a rotating rod. In muscle tissue, there was less Aβ, the cells appeared less vacuolated, and they expressed less αB-crystallin, a marker of cell stress. There was no change in the inflammatory marker MHC type I. Staining of cells indicated that antibodies could enter muscle fibers and bind Aβ deposits there (see image), leading to their clearance by unknown mechanisms. 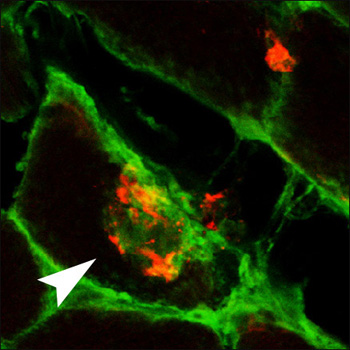 Muscling in on Aβ
An Aβ deposit (red) in muscle fibers from a mouse model of inclusion body myositis also stains with anti-mouse IgG antibodies (green) after immunization of the animals with Aβ. View larger image. Image credit: Frank LaFerla and the Journal of Neuroscience

The positive effects of immunization seemed to be due to the removal of Aβ oligomers. Blots of muscle tissue with either of two oligomer-specific antibodies, A11 or OC, showed reduction of oligomers in immunized mice. Finally, Kitazawa showed that addition of oligomers to muscle cells in culture was directly toxic, and that the adverse effects could be prevented by adding antibodies from immunized mice. From this, the investigators conclude that immunization may act by neutralizing oligomers’ toxicity.

“In this study we provide evidence that Aβ is one of the key pathological components in IBM and promoting clearance of Aβ may be a valid therapeutic strategy to pursue,” the authors write. “We’re hoping this would be a basis for doing a clinical trial with immunotherapy,” LaFerla told ARF. That will depend on the ongoing studies of vaccines for AD, to prove that the vaccines are safe. In addition, LaFerla pointed out that because IBM is so rare, it is hard to convince pharma that the studies are worth doing. (For more on the potential of Aβ vaccines in IBM, see comment below by Askanas).

Outstanding questions include the mechanism of clearance of Aβ. One difference between AD and IBM is the location of the Aβ deposits. In AD, amyloid is mostly extracellular, while in IBM it is mostly intracellular. However, there are indications that intracellular Aβ may also be important in AD, and recent studies have shown that antibodies are capable of clearing intracellular proteins, including Aβ (Tampellini et al., 2007) and α-synuclein (see ARF related news story and Masliah et al., 2005). In the case of the IBM mice, the researchers have no idea yet what happens to the Aβ after antibody binding, LaFerla said.

“This work says that Aβ oligomers are toxic to a wide variety of cell types, both muscles and neurons,” LaFerla told ARF. How might oligomers kill muscle cells? “Our hypothesis is that Aβ is acting in a similar fashion to what it does in neurons. If we had to guess, we’d say it probably interferes with protein disposal systems, autophagic processes, and the proteasome,” LaFerla said. That is a subject of active investigation, he added.—Pat McCaffrey