At first glance, the pair of proteins that form the key pathological features of Alzheimer disease seem quite an odd couple. One is a peptide snipped from a membrane-associated precursor. The other is a microtubule-binding protein normally found in nerve axons. Yet a new study by Gunnar Gouras and colleagues at Weill Cornell Medical College, New York, suggests that toxic forms of amyloid-β (Aβ) and tau get cozy where it may matter most in AD—at synapses. Reporting 3 September in the Neurobiology of Aging online, the team used dual-labeling immuno-electron microscopy (dual EM) to reveal colocalization of Aβ42 and hyperphosphorylated tau in postsynaptic terminals of hippocampal neurons in two well-characterized AD mouse models (Tg2576 and 3xTg-AD) and in postmortem human AD brain. The findings provide “new insight into the anatomical divergence of the two pathologies,” Gouras told ARF. “That has been a mystery—why plaques are in one place and tau in another. This links them at the pathological level at synapses.” 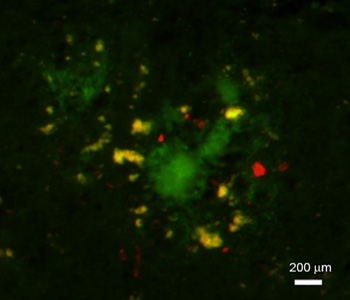 Together at last: Aβ42 (green) and phospho-tau (red) cozy up in dystrophic neurites around an amyloid plaque in human AD brain tissue. Areas of Aβ-tau colocalization appear in yellow. Image credit: Estibaliz Capetillo-Zarate

However, these experiments didn’t have the resolution to distinguish intracellular from extracellular expression. “You need EM if you want to say anything about what's inside a process or synapse,” Gouras said. With help from EM expert and Cornell colleague Teresa Milner, the researchers cranked up the magnification several hundredfold to get a closer look at the dystrophic neurites around plaques. They saw hyperphosphorylated tau on filamentous structures and in microtubule-associated clusters near Aβ42 in Tg2576 dendritic profiles, including postsynaptic compartments. It is widely believed that synapses fizzle long before neurons die, and synaptic loss is the best correlate of fading cognition in AD (Coleman and Yao, 2003).

Because Tg2576 mice have scant tau pathology, Gouras and colleagues turned to a newer AD mouse model, 3xTg-AD (Oddo et al., 2003 and ARF related news story) for a better look at Aβ-tau interactions. With mutations in APP, tau, and presenilin-1, the triple transgenics not only accumulate intraneuronal Aβ and subsequent plaques but also develop tau tangles (LaFerla et al., 2007). “Here we had a powerful model to study the potential relationship between Aβ and tau,” recalled Gouras. “They're the two hallmarks, but is there any relation?”

Evidence for an Aβ-tau connection in AD has been trickling in. For example, Lennart Mucke and colleagues at the Gladstone Institute and the University of California, San Francisco, showed recently that APP transgenic mice with halved levels of tau protein are protected from Aβ-induced cognitive decline and premature lethality (see ARF related news story). Aβ and tau seem to be linked, “but we really don't know how,” Gouras said. “The triple transgenic allows us to look at an isolated system.”

CA1 neurons in the hippocampus of these mice were well suited for this study because of their abundant intraneuronal Aβ and clearly stratified anatomy. Their distal dendritic processes end in the same place—the stratum lacunosum-moleculare (SLM). Curiously, hyperphosphorylated tau appeared most prominently in the SLM (by three phospho-tau-specific antibodies), and this was the 3xTg-AD brain region showing the strongest colocalization with Aβ42. No such colocalization was seen in axons or presynaptic terminals.

Was the Aβ-tau relationship one-to-one in the SLM? Zooming in with dual EM, the researchers were able to look at individual SLM dendritic terminals in 13-month-old 3xTg-AD mouse brain. Of 78 identifiable terminals, 29.2 percent were positive for both Aβ42 and phospho-tau, 48.6 percent were negative for both, and far fewer were only positive for Aβ42 (13.9 percent) or phospho-tau (8.3 percent). For the most part, Gouras said, “it's not like one postsynaptic compartment has Aβ accumulation and another has phospho-tau. Phospho-tau develops in those postsynaptic compartments that have Aβ accumulation.” Gouras noted that the Aβ-tau colocalization reported in the SLM could also be occurring in vulnerable neurons elsewhere in the brain, but those areas are harder to study because the anatomy is not so well defined.

EM is a slow and laborious technique, dual EM even more so, Gouras told this reporter. “It is not like immunofluorescence that you can do overnight. This paper was four and a half to five years of work.” Other researchers reporting Aβ-tau colocalization in synapses earlier this year chose against microscopy and instead used flow cytometry to quantitate the two proteins in postmortem human AD brain synaptosomes—one-micron sac-like structures formed by nerve endings at synapses. In their analysis, nearly three-fourths of the synaptosomes were Aβ-positive. About a quarter of these also stained with phospho-tau antibody, most prominently those in the entorhinal cortex, a brain area with early AD vulnerability (see ARF related news story). In mice, this region could be dissected from brain tissue for EM analysis of presynaptic areas, Gouras said. Unfortunately, though, the entorhinal cortex in 3xTg-AD mice doesn’t have much AD pathology, so a mouse that more closely models human disease would be needed.

In the meantime, the new data have stirred up further intrigue about Aβ and phospho-tau, and what they might be doing together at synapses. Tau is mostly spread throughout nerve cells, Gouras said, “but there are instances where we see beginnings of phospho-tau accumulation at sites of Aβ. We want to understand the biology there.”—Esther Landhuis