Well, would you know a diamond if you held it in your hand? Perhaps not without long-term potentiation (LTP), a property that allows neurons to mount stronger and stronger responses as they are more frequently stimulated. LTP is important for building memories and the process can be prevented by, amongst other things, amyloid-β (see ARF related news story), the peptide that forms the insoluble plaques found in the brains of those with Alzheimer disease (AD). In last Thursday’s Neuron, Joachim Herz and colleagues reported how two other AD-linked proteins, Reelin and the receptor for apolipoprotein E (ApoER2), are involved in LTP. Together, in a process that depends on alternative splicing of ApoER2, the two induce phosphorylation of the N-methyl-D-aspartate (NMDA) form of glutamate receptors, which have been implicated many times in long-term potentiation and memory formation.

ApoER2, of course, binds ApoE, the ε4 variant of which is the strongest genetic risk factor for late-onset AD (see the ARF ApoE primer for some more background). Reelin, another ligand for ApoER2, is essential for regulation of neuronal migration during development. But it is also expressed in the adult brain. In fact, recent evidence suggests that Reelin-producing Cajal-Retzius cells in the cortex may be some of the earliest hit in AD (see recent ARF related news story). So exactly what role does Reelin play in adults?

Recently, the authors showed that Reelin and ApoE receptors cooperate to enhance LTP (see Weeber et al., 2002), but exactly how the proteins achieved this was unclear. To shed some light on the mystery, first author Uwe Beffert and colleagues focused on an exon of the highly conserved ApoER2 that is only present in mammals.

The exon, number 19, is differentially spliced, a common feature of proteins involved in neurotransmission. So using knock-in vectors to replace the normal copies of ApoER2 in mice with unspliceable variants, Beffert and colleagues tested to see what role the exon assumes in the mammalian brain. They found that in the absence of exon 19, neuronal migration occurs normally, ruling out any role in development. Likewise, activation of tyrosine kinases triggered by binding of Reelin to the ApoE receptor was normal both in the presence or absence of exon 19, suggesting that the exon is not required for this particular set of signals to work properly, either. This led the authors to look for other interactions that might be influenced by the exon.

Beffert and colleagues examined hippocampal slices from the knock-ins for LTP effects. They found that there was no difference in basal transmission or LTP between mice expressing ApoER2 with exon 19 and those producing ApoER2 without the exon. However, stimulation of LTP by Reelin was another matter. Reelin-induced enhancement of LTP was totally abolished in mice lacking the exon 19. Next, to find out if Reelin enhances LTP by modifying transmission through NMDA receptors, Beffert and colleagues recorded postsynaptic potentials while blocking the other type of glutamate receptors, the AMPA receptors. Addition of Reelin increased transmission through normal neurons by about twofold, but in those expressing ApoER2 minus exon 19, transmission actually fell by about 50 percent.

“Taken together, these data indicate that LTP enhancement by Reelin involves a molecular mechanism that is dependent upon the alternatively spliced exon 19. In addition, this mechanism involves, at least in part, the modulation of NMDA receptor functions,” write the authors.

This LTP enhancement is not just restricted to hippocampal slices, either. The authors evaluated the knock-in mice in two commonly used memory tests—fear conditioning (a variation on the Pavlov dog, where, for example, the mouse learns to associate a stimulus, such as an audible tone, with a mild foot shock) and spatial learning (where mice in a water tank learn to find and swim to safety on a submerged platform). In both cases, the knock-in mice expressing ApoER2 minus exon 19 were statistically poorer performers. In the fear conditioning test, for example, mice lacking the exon only responded to the tone about 10 percent of the time, compared to 40 percent of the time for knock-ins with the exon. And in the water maze, mice lacking exon 19 spent about 20 percent less time searching in the correct quadrant for the platform.

What is even more intriguing is that alternative splicing of ApoER2 seems to be regulated by activity. In wild-type mice, expression of the exon 19-positive variant increased during periods of activity, for example, when the mice were feeding. This alternative splicing was not dependent on the time of day, indicating that it is truly activity controlled and not regulated by the endogenous circadian clock.

So how do Reelin and ApoER2 influence the NMDA receptors? In coimmunoprecipitation experiments using cultured cells and extracts from mouse brains, Beffert and colleagues found that ApoER2 and the NMDA receptor subunit 2A (NR2A) and 2B (NR2B) can interact with each other. Using the same strategy, the authors found that ApoER2 also interacts with postsynaptic density 95 (PSD95), a protein that binds to, and has been implicated in toxicity of, Aβ (see Lacor et al., 2004). Interestingly, this interaction only occurs if exon 19 is present in ApoER2. Furthermore, the authors found that all these components are present in synaptosomes and that Reelin leads to phosphorylation of NMDA receptors that are isolated in complex with ApoER2. 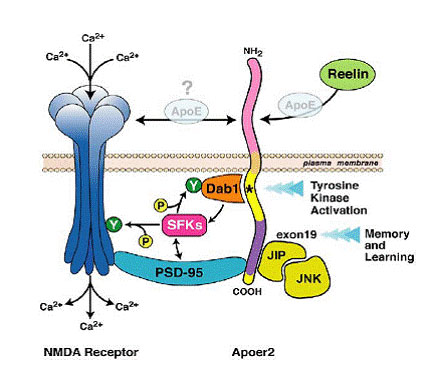 How ApoER2 Exon 19 Can Modulate NMDA Receptors and LTP
The only two classes of proteins known to bind to exon 19 of ApoER2 (purple) are PSD95 and the c-Jun N-terminal kinase (JNK) interacting proteins (JIP). The former can bind to SFKs and may recruit them to the NMDA receptor (see Tezuka et al., 1999), while JIPs could recruit JNK, which can modulate LTP (see Curran et al., 2003). How ApoE might affect Reelin signaling is unclear, but should be of great interest to AD researchers. [Image taken from Beffert et al., courtesy of Neuron and Cell Press]

All this evidence has led the authors to draw a better picture (see above) of how Reelin, ApoER2, PSD95, and the NMDA receptor interact. The role of ApoE is currently unclear, but as the authors point out, “ApoE, another ligand for ApoER2 and a major isoform-specific modifier of late-onset Alzheimer’s disease, could in principle alter ApoER2 signaling and NMDAR response by interfering with normal receptor activation (see figure). Such a mechanism might contribute to the role of ApoE in Alzheimer’s disease.”

The unequivocal demonstration that Reelin has a function in the adult brain is an important aspect of this work, writes Gabriella D’Arcangelo, Baylor College of Medicine, Houston, in a related Neuron Preview. She also suggests that future work should focus on whether Reelin, required for neuritic outgrowth in the developing brain, might also regulate synaptogenesis or synapse stability in the adult brain. Loss of synapses is, of course, a major part of AD pathology (see related ARF symposium coverage), while in patients with schizophrenia, reduced expression of Reelin has recently been attributed to hypermethylation of DNA (see Grayson et al., 2005) documented in patients with schizophrenia. “It will be interesting to examine ApoER2 splicing in the brain of schizophrenia patients as well as in other patient populations affected by learning and memory defects, such as Alzheimer’s disease,” D’Arcangelo concludes.—Tom Fagan