Like the police boot that keeps your car off the road, certain antibodies can stop pathological tau in its tracks and prevent it from infiltrating neurons, according to a paper in today’s Neuron online. Scientists led by joint senior authors David Holtzman and Marc Diamond at Washington University in St. Louis, Missouri, screened a panel of tau antibodies and identified those that appear to specifically interfere with tau’s extracellular spread from neuron to neuron. A slow, steady infusion of these antibodies into mouse brains reduced tau pathology and offered a hint at cognitive improvement in a test measuring the animals’ recollection of past electric shocks. Not only does the work suggest a potential treatment for tauopathies, it also provides support for a burgeoning hypothesis that extracellular tau travels from cell to cell much like a prion. “This suggests that yes, extracellular tau is very likely to be playing a role in pathology,” Diamond said.

“This work is fantastic,” commented Eckhard Mandelkow of the German Center for Neurodegenerative Diseases in Bonn, in an email to Alzforum (see full comment below). “It explains why antibody therapy might work for tau pathology…antibodies only have to reach extracellular tau.” 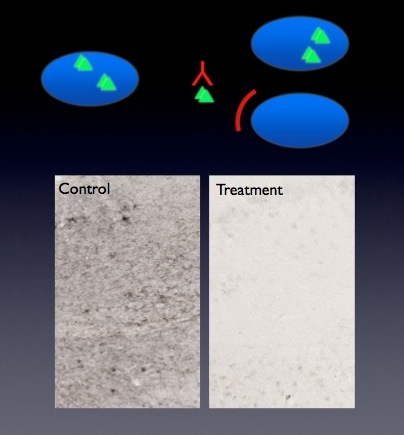 Diamond’s group, and others, are pursuing the hypothesis that when neurons spit out toxic tau, it travels to and invades adjacent cells, corrupting their healthy tau into more of the pathological species (see ARF news story and ARF news story, Clavaguera et al., 2009 ). This theory would explain the established and stereotypical progression of tau through the brain of people with Alzheimer’s, starting in the locus coeruleus and moving into the transentorhinal cortex, then hippocampus, then further (Braak and Del Tredici, 2011). Therefore, scientists reason, an antibody or other blocking agent that captures and detains extracellular tau should halt this spread. While several research groups have attempted to vaccinate animals against tau, with varying success rates, no one before has specifically taken aim at the transitory tau species in the exact way Diamond and Holtzman did in this study (see ARF news story, ARF news story; Bi et al., 2011, Boimel et al., 2010, Troquier 2012, Boutajangout et al., 2011. Chai et al., 2011, Rosenmann et al., 2006). ”The effect of [our] antibodies is very strong in comparison to what has been published,” Holtzman told Alzforum.

Antibody Selection
When Holtzman’s lab first became interested in tau, the group generated a series of antibodies as tools for experiments such as immunohistochemistry and immunoprecipitation. The Diamond lab, meanwhile, developed a cell culture assay to study the uptake of extracellular tau and seeding of new intracellular fibrils (Kfoury et al., 2012). The two crews joined forces for the current study, helmed by first author Kiran Yanamandra, to identify antibodies that could obstruct tau seeding.

Holtzman’s antibodies impeded tau seeding to varying degrees in the sensor assay. Diamond suspects they work by preventing the kidney cells from taking up extracellular tau. For their in-vivo experiments, the researchers selected three antibodies with high, medium, and low activity in preventing seeding. HJ8.5, a mouse monoclonal raised against human tau, put the strongest block on seeding. HJ9.3, which was raised against mouse tau but also recognizes the human protein, was the medium-efficacy representative. HJ9.4, also raised against mouse tau with low affinity for human tau, was the weakest. As negative controls, the researchers used phosphate-buffered saline or the antibody HJ3.4, which ignores tau but binds Aβ instead.

Block Seeding, Block Disease?
In the Washington University mouse colony, P301S mice first develop tau pathology around five months of age, so the researchers began their treatment at six months. They implanted tiny catheters into the left lateral ventricles of the animals and slowly, continuously infused the antibodies. After three months, they sacrificed the animals and examined their brains. The highest-activity antibody HJ8.5 strongly diminished staining with the phospho-tau antibody AT8, while the other two antibodies causes a smaller reduction. HJ8.5 also reduced staining with the amyloid marker thioflavin S, which labels both amyloid plaques and neurofibrillary tangles.

In addition, the high-activity HJ8.5 and medium-activity HJ9.3 also reduced microgliosis, which HJ9.4 did to a lesser extent. And in biochemical assays, Yanamandra and colleagues observed that the high- and medium-efficacy antibodies HJ8.5 and HJ9.3 diminished the fraction of total tau that was detergent insoluble, indicating the antibodies had interfered with aggregation.

Next, the researchers returned to the FRET sensor assay with brain lysates from the antibody-treated mice. HJ8.5 and HJ9.3 treatment reduced the seeding efficacy of these lysates, while low-efficacy antibody HJ9.4 did not. This supports the original theory that the antibodies would protect neurons by blocking seeding, Holtzman said.

Less Tau, Better Memory?
Would the antibody treatment affect mouse behavior? The researchers tried several tests, Holtzman said, and found these P301S mice to be abnormal in their conditioned fear response. In this test, 8.5-month-old animals spend time in a chamber where they learn to associate a sound with an electric shock. The following day, the researchers return the animals to the same chamber and track how much time they spend moving around versus frozen with fear. Mice that have formed unpleasant memories of the chamber spend less time in motion. This association is known to require hippocampal function.

Because the antibodies’ ability to block seeding did not line up neatly with their behavioral effects, it is unclear that they affect contextual fear by interfering with seeding, noted Karen Ashe of the University of Minnesota in Minneapolis, who was not involved with the study. Holtzman agreed that the researchers cannot be certain of the precise mechanism for the behavioral results beyond saying that they are an effect on some form of tau.

Ashe, as well as Miranda Reed of West Virginia University in Morgantown, questioned the behavior part of the study because it included no wild-type control in the same experiments as the treated mice. Further, Jackson Laboratories, the source of the mice, has reported that the animals have limb weakness that leads to paralysis (see JAX Mice Database). “Without the [wild-type] controls, it is hard to interpret the data,” Ashe told Alzforum. “I am wary of interpreting cognitive data that depends upon a physical readout in an animal that may be physically impaired.”

Holtzman said that the P301S colony at Washington University does not have the reported motor defects, aside from occasional walking difficulties in animals older than one year. It is common for mouse models of degenerative diseases to show differing phenotypes, depending on the outcrosses used to maintain the lines and other variables in the colony, Diamond noted. Wild-type mice typically spend 30-50 percent of their time frozen on their second day in the chamber, Holtzman told Alzforum.

Regardless of the details of the behavioral assays, the study authors say their results support the hypothesis that tau transmission relies on an extracellular, prion-like mechanism, and others agreed. “This suggests that antibody-based therapies may be able to stop the progressive spread of tau tangles in the brain of those affected by Alzheimer’s disease,” wrote Amy Pooler of King’s College London, U.K., in an email to Alzforum (see full comment below). “However, more work will need to be done to determine the mechanism by which the tau/antibody complexes are cleared from the brain.” The researchers are not sure what happens to antibody-bound tau, but they noticed much of it disappeared from the brain and entered the bloodstream. Presumably, immune cells would then eliminate the complexes. Microglia might do the same inside the central nervous system, but this is unproven.

Tau Transit Treatments?
From these data, Diamond concluded that blocking the prion-like transmission of tau would be a good way to design therapeutic antibodies. He and Holtzman said they want to pursue an anti-tau transit therapy. Referring to confidentiality agreements, the authors declined to take questions about how their antibodies might be developed further. The Neuron paper acknowledges funding by the Tau Consortium, a philanthropy started by Texas billionaire Richard Rainwater, and the company C2N Diagnostics, which Holtzman co-founded. Clinical development will first require more mouse experiments to determine if the antibody works when delivered peripherally, instead of directly to the brain. Peripheral delivery would be much more practical for human therapy.

As a first disease target, it makes sense to try a pure tauopathy such as progressive supranuclear palsy, corticobasal degeneration, or tau-based frontotemporal dementia, Holtzman suggested. Alzheimer’s disease is complicated by the co-occurrence of amyloid-beta pathology.

“It is nice to see that people are continuing to get positive effects with tau immunotherapy,” commented Einar Sigurdsson of New York University, who was not involved in this work but has been studying tau immunotherapy since the beginning of that field. Pharmaceutical companies might be attracted to antibodies against extracellular tau, Sigurdsson added, because they do not have to worry about getting the antibodies inside neurons. Such anti-tau therapies would be analogous to anti-amyloid-beta immunotherapy against extracellular plaques (see Alzforum News story on DeMattos et al., 2001; and Bard et al., 2000). Passive immunotherapy is ideal for proof-of-concept studies, but could be less practical for widespread patient use, Sigurdsson believes, because the antibodies are expensive and require regular dosing. Eventually, researchers might be able to come up with active tau immunization protocols that induce lasting immunity with fewer treatment sessions.—Amber Dance