Proteins that make amyloids can bend and twist into a variety of shapes in the process. Two new papers, in the March 9 Science and March 8 PNAS online, describe structures for a cylindrical oligomer and ribbon-like protofibril, respectively, that appear to be offshoots of the pathway toward amyloid fibrils. These arrangements are transient but toxic to cells, and might be related to the neuron-slaying forms of proteins such as amyloid-β and tau present in Alzheimer’s and other dementias. In both of the newly published structures, individual peptide strands lie side by side but head to toe, giving the molecules an anti-parallel structure.

Parallel β-sheets are thought to be the most common amyloid shape, but as these papers show, there are other options. Of the β structures related to AD, “at this point any of those is a candidate for being a toxic species,” said Robert Tycko of the National Institute of Diabetes and Digestive and Kidney Diseases (NIDDKD) in Bethesda, Maryland, senior author on the PNAS paper. “We do not know which of them is more important.” His work and that of the Science paper authors are some of the first specific structures for intermediate amyloid forms, Tycko said (see also ARF related news story on Streltsov et al., 2011).

The new structures could be crucial to the pathology of Alzheimer’s disease; on the other hand, they may “have nothing to do with it,” said David Teplow of the University of California, Los Angeles, who was not involved in either study. Torleif Härd of the Swedish University of Agricultural Sciences (SLU) in Uppsala, Sweden, wrote in an e-mail to ARF, “Research such as this will potentially allow scientists to finally home in on structure-function relationships and, in particular, mechanisms of neurotoxicity. Any progress here will greatly aid drug discovery.” Härd was not involved in either project (see full comment below).

Six-Piece Cylinders
Both research teams faced a similar challenge—their structure of interest disappeared quickly as it adopted other conformations. “The difficulty in pinning down these amyloid oligomers is that they are transient,” said David Eisenberg of the University of California, Los Angeles, senior author on the Science paper. “You put Aβ or tau into solution and it forms amyloid oligomers, but then it goes into fibrils.” Eisenberg and first author Arthur Laganowsky, since moved to the University of Oxford, U.K., took advantage of another amyloid protein, αB crystallin. This chaperone aggregates in the lens of the eye during formation of cataracts. The crystallin assembles into fibrils more slowly than other amyloids, allowing the researchers to isolate the oligomers of interest.

Laganowsky identified an oligomer-forming segment of αB crystallin, 11 amino acids in length, which he was able to crystallize for X-ray studies. Six of these segments twisted together, in anti-parallel orientation, to form a new structure—similar to a β-barrel—that the study authors dubbed “cylindrin.” The conformation is “totally unexpected,” Teplow said. The individual peptides lean slantwise in the cylinder (see image below), instead of standing up parallel to the cylinder’s axis, as might be expected if the cylindrins were subunits of full-fledged amyloid fibrils. This led the authors to propose that cylindrins are not an intermediate between monomers and stable fibrils. Cylindrins were less stable than fibrils, so Eisenberg thinks they are a rare form. 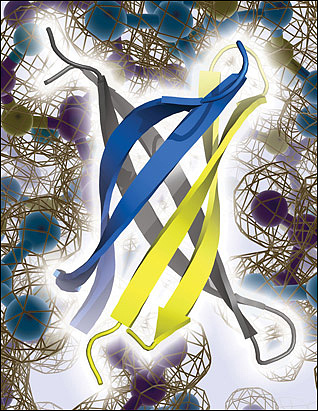 An anti-parallel slant. X-ray crystallography reveals that fragments of αB crystallin form an anti-parallel, β-barrel oligomer called cylindrin. Cylindrin does not appear to form stable fibrils akin to those assumed by Aβ and other amyloids linked to neurodegenerative diseases, but cylindrin poisons neurons and may be related to toxic Aβ oligomers. Image credit: Science/AAAS

The researchers used computer modeling to show that Aβ, too, might form a cylindrin structure. Like some Aβ species, crystallin cylindrin formations poisoned four different mammalian cell lines, and they interacted with the A11 antibody, which recognizes a common epitope shared by many different amyloid oligomers (see ARF related news story on Kayed et al., 2003). It has been unclear, Tycko commented, what precisely the A11 antibody recognizes. Perhaps, he suggested, the A11 epitope is this cylindrin motif.

Twisted Ribbons
Tycko and Wei Qiang of NIDDKD, first author on the PNAS paper, took a different approach to examine a transient form of Aβ containing the familial AD-linked Iowa mutation, an aspartic acid-to-asparagine swap at position 23 of the peptide (Grabowski et al., 2001). Previously, Tycko and colleagues showed that this mutant Aβ40 assembles into two different conformations (Tycko et al., 2009). In one, the individual β-strands making up the sheet lie next to each other head to head and toe to toe, in long, straight fibrils. However, in the second, they line up anti-parallel in shorter, curvy protofibrils, Tycko said.

In order to study the anti-parallel structures, Qiang had to purify them. He took advantage of the fact that the anti-parallel forms grow more slowly than the parallel ones. He seeded a solution of Aβ monomers with bits of the mixed population of fibrils, and then allowed the fibrils to extend. He filtered out the larger pieces, leaving only the shorter, anti-parallel ribbons. He then used electron and nuclear magnetic resonance spectroscopy to delineate how the β-strands line up.

In parallel structures, the organization is simple; hydrophobic residues find themselves close to similar residues in neighboring strands. Qiang discovered that intermolecular hydrophobic reactions also held the anti-parallel conformation together. However, fewer amino acids participated in the interactions, perhaps explaining why this shape is less stable than the parallel version, Tycko said. The structures of the parallel and anti-parallel versions are “remarkably similar in terms of their overall topology,” Teplow said. “What you do is just take one [β] strand and rotate it 180 degrees, and then you get the other [structure].” Qiang also determined that the parallel and anti-parallel ribbons are similarly toxic to primary rat embryonic hippocampal neurons.

The Iowa mutation, which disrupts a salt bridge between aspartate-23 and lysine-28, may push the protein toward the anti-parallel conformation, the authors suggest. This bond was thought to be key to stabilizing fibrils (Sciarretta et al., 2005), but with the new data, “it seems that that salt bridge is not as important for formation of fibrils as was thought,” noted Brigita Urbanc of Drexel University in Philadelphia, who was not involved in the study. This particular mutation is linked to cerebral amyloid angiopathy, and the unusual nature of these protofibrils might predispose them to build up along blood vessels, Tycko speculated. It is possible that other mutations or wild-type Aβ might form a similar structure, he said.

“The results support the emerging, and now much substantiated, view that intermediates or off-pathway aggregates on the amyloid formation pathway contain anti-parallel β-sheet structures,” Härd wrote. The varying structures are not too surprising, Urbanc said, since Tycko’s previous work showed that fibrils can adopt a range of morphologies depending on growth conditions (Petkova et al., 2005). “It is quite possible that there are multiple assembly pathways occurring simultaneously,” she said. One question that remains, Urbanc added, is why such multi-conformation proteins evolved, given the trouble they can cause. “Perhaps they have some role that we do not completely understand yet,” she speculated. “Their flexibility may have some biological relevance.”—Amber Dance