A new study shows striking images of early amyloid deposits on blood vessels of young APP23 transgenic mice, including pompom-like and cube-shaped clumps clinging to brain microvessels and distorting them. Older mice displayed holes in the vasculature around plaques with evidence of angiogenesis around the cleared areas. Published February 27 in PNAS online, the images come from Thomas Krucker and colleagues of the Novartis Institutes for Biomedical Research in Cambridge, Massachusetts. The scientists used vascular casting and scanning electron microscopy to reveal the three-dimensional architecture of microvessels in APP-expressing mice. Their work demonstrates that, in this mouse strain, damage to the microvasculature begins well before the onset of parenchymal amyloid plaques or vascular amyloid deposition. The authors suggest that imaging vascular alterations could be used as a biomarker of Alzheimer disease.

Changes in blood flow are a constant feature in AD, and are generally thought to be related to the widespread vascular pathology observed in AD brain. Krucker and colleagues have previously shown that older APP23 mice, which carry a human APP transgene with the Swedish mutation, have structural changes in blood vessels and modified blood flow (Beckmann et al., 2003; also see ARF related news story). In the current study, first authors Eric Meyer and Alexandra Ulmann-Schuler set out to define the progression of those changes over time, starting with young mice.

To visualize the vasculature of the whole brain, the investigators used corrosion casting, which involves infusing a polyurethane-based resin into the brain, letting it solidify and then removing the soft tissue. The result is a rubberized three-dimensional reproduction of the brain’s blood supply, right down to the capillary microvessels. In a modification of the technique, the researchers also used a novel fluorescent resin and left the soft tissue intact to look at the relation of plaques to the vasculature. 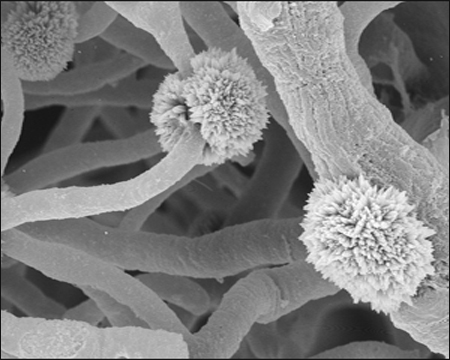 In normal mice, casting revealed a regular network of vessels over the surface of the cortex. Casts from 18-month-old APP23 mice, on the other hand, showed a distinctly moth-eaten appearance, with holes dotting the cortex. Around the holes, which ranged from 0.03 to 3.5 mm in diameter, vessels were truncated, kinked, and studded with knob-shaped protrusions. At the hole edge, the vasculature was denser than usual, suggesting angiogenesis was occurring. By staining tissue with thioflavin S, the researchers showed that amyloid plaques sat in areas devoid of vasculature, suggesting that the holes seen in the casts corresponded to the location of plaques.

To trace the formation of the vascular gaps, the investigators made casts from mice from 4-5 months of age on. Even the youngest mice had significant numbers of holes, which increased with time up to 15 months of age. After that, the number of holes leveled off, but their size continued to grow.

Scanning electron microscopy of the casts revealed small knob-like structures attached to vessels in 3-month-old APP23 mice. The deposits, which turned out to be composed of Aβ peptides, took on a pompom-like appearance in 4-5-month-old animals (see image), with protruding spikes forming tufts 8 to 15 microns in size on small vessels. In some cases, the pompoms encircled capillaries and appeared to constrict or deform them. The researchers also saw smooth cubes of similar size on some vessels. The deposits stained with thioflavin, Congo red, and a polyclonal Aβ antibody. Mass spectroscopy identified Aβ peptides as the main component of the structures. No pompoms or cubes were seen in normal mice or any of several other strains of mice with mutations unrelated to AD. The present study reported only data in APP23 mice. However, Krucker told ARF by e-mail that the investigators had seen similar structures, though shifted toward older ages, in another APP transgenic mouse line, APP51 (Bodendorf et al., 2002. This paper covers primarily BACE transgenic mice. It mentions APP51 mice, the data on which have not been published elsewhere. The APP51 mice feature the same promoter as the APP23 mice, but express a wild-type human APP transgene.)

The authors speculate that pompoms may be starting points for amyloid deposition. Another recent imaging study that spied plaques forming in living mice (see ARF related news story) found that the deposits pop up near but not directly on blood vessels. That work did not visualize microvessels, however. Other studies have shown that in human brain, most small plaques are associated with capillaries (Kawai et al., 1990), and in several mouse models, plaques have been found exclusively in association with blood vessels (see ARF related news story). Vascular deposits that might be pompoms have also been described (Roher et al., 1993).

Based on their results, the authors propose a model where, they write, “minuscule amyloid deposits give rise to a local disturbance of the blood flow in capillaries, triggering a cascade of increased amyloid production/deposition resulting in vascular degeneration.” Ultimately, the process eats holes in the vascular net, accompanied by compensatory angiogenesis and remodeling. Local changes in blood flow could contribute to early behavioral changes that occur before plaque deposition, they speculate. The paper does not discuss what role Aβ oligomers versus plaques may play in this process. Even so, the early appearance of vascular disruptions supports the idea that impaired blood flow is a contributing cause of disease, and could provide a route to both early detection and monitoring of therapies, according to the authors.—Pat McCaffrey