While scientists are steaming ahead on establishing iPSC lines for research into Parkinson disease and amyotrophic lateral sclerosis (ALS) (see story below and Part 3), they have been more reluctant to embrace the technology for Alzheimer disease. Perhaps this is due to concerns that a complex, late-onset disease such as AD cannot be easily modeled by iPS cells. Nonetheless, a few labs are creating iPSC lines from dementia patients. Selina Wray, working with John Hardy and Patrick Lewis at University College London, U.K., is making multiple iPSC lines specific for various familial dementias, including AD and frontotemporal dementia. Patients in the cognitive disorders clinics at UCL donate the necessary fibroblasts, and because the patients have been genotyped at the clinic, their mutations are known. Many of the clinic patients are also part of the Dominantly Inherited Alzheimer Network (DIAN, see also ARF conference story), Wray said. This means they have brain images and fluid samples on file as well, providing detailed clinical information to correlate with data from iPSC lines. Hardy’s group also collects fibroblasts from relatives of the patients who carry the same mutation, as well as from unaffected relatives for use as controls. Wray added that she is using the original 2006 Yamanaka method (see Takahashi et al., 2006) and retroviral vectors to reprogram the fibroblasts, because of this method’s efficiency. The London group will make both their iPSC and fibroblast lines available and is looking at depositing them either with Coriell Institute for Medical Research in Camden, New Jersey, or with the European Collection of Cell Cultures (ECACC). The fibroblasts might be available within six months, Wray said, but she expects the iPSC lines to take longer due to the need to validate each line.

Wray currently has several iPSC lines with tau mutations, which cause frontotemporal dementia, as well as lines for one APP mutation and one presenilin mutation, both of which cause Alzheimer’s. She said that she expects to generate many more lines, with the goal to get at least three lines of each mutation for comparison. Wray does not know yet if neurons generated from these lines will show disease traits in culture, but she is excited by the potential of iPS cells. “I think they really will open a huge range of possibilities and give us a much more physiologically relevant system, because we’ll be looking at the mutated proteins at endogenous levels,” Wray said. She believes iPS cells will provide a better model for studying tau splicing, for example, than do either current animal models or knockdown and overexpression experiments. “The pattern of tau splicing is specific to humans,” Wray said. There is debate in the field about splice forms of tau in mouse and rat models, raising the question to what extent rodent models reflect the human disease (see ARF ICAD news story). 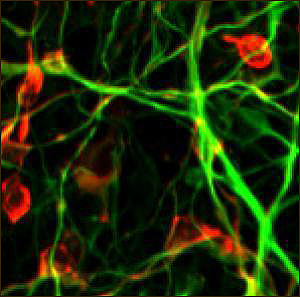 Dopamine-producing neurons made from induced pluripotent cells, reprogrammed from the skin of a Parkinson's patient. Green is a neuronal marker (class III β-tubulin) and red is a dopamine-producing enzyme (tyrosine hydroxylase). Image credit: Frank Soldner and Dirk Hockemeyer/Whitehead Institute

Other researchers making iPS cells from AD patients include Larry Goldstein at the University of California in San Diego, and Asa Abeliovich at Columbia, New York City. Goldstein said his lab is generating iPSC lines from fibroblasts of people with APP duplications and presenilin mutations, as well as from a few patients with sporadic AD. They have already differentiated these iPS cells into neurons and characterized them, and Goldstein expects the lines will be available from his lab upon request within a few months. Goldstein’s work is supported by the National Institute on Aging (NIA), using funds from the American Reinvestment and Recovery Act. Abeliovich is working on both AD and PD iPSC lines. Abeliovich said he is generating lines from both sporadic and familial forms of the diseases, but they are not yet available.

Parkinson Disease
The second most common neurodegenerative disease, Parkinson’s, has been an early focus of iPSC research, with several labs and large groups creating PD-specific lines. Among the handful of published iPSC lines are some early ones generated from five patients with sporadic PD by researchers led by Rudolf Jaenisch of MIT (see Soldner et al., 2009). These lines are available now, Jaenisch said; however, they are not useful as disease models because their genetics are unknown, and they have so far failed to show a disease phenotype in vitro. “The key now is to generate lines that are genetically defined,” Jaenisch said. His group is developing iPSC lines from PD patients with known mutations, using a Cre-Lox system that removes reprogramming factors (see ARF related news story on Soldner et al., 2009).

Working with Hardy at University College, Lewis and Helene Plun-Favreau are also making iPSC lines from familial PD patients. They are currently generating a synuclein triplication line and about a dozen lines with mutations in LRRK2, said colleague Wray. When finished, these lines will be made publicly available through a cell bank.

Here’s yet another group active in this field. While in George Daley’s lab at Harvard, first author In-Hyun Park, now at Yale in New Haven, Connecticut, created one iPS line each from people with PD, Huntington disease, and Down syndrome (see Park et al., 2008). These lines are all available through the iPS Core of the Harvard Stem Cell Institute. Park said he created these lines as a proof of concept of the versatility of iPS cells, but is not continuing to pursue them as disease models.

Large foundations and multi-institution consortia are also diving into the iPSC field. The nonprofit Parkinson’s Institute and Clinical Center in Sunnyvale, California, is working with the Stanford Institute for Stem Cell Biology and Regenerative Medicine and the Department of Neurosurgery at Stanford to develop iPSC lines from patients with both sporadic and familial forms of PD, according to information on the Parkinson’s Institute website. The project is funded by the California Institute for Regenerative Medicine, and cell lines will be available to researchers within California, wrote Birgitt Schuele at the institute in an e-mail to ARF. The institute plans to establish a bank of 15-20 iPSC lines, differentiate the cells into dopaminergic neurons, and use them to model the disease and screen drugs. So far, they have generated the first iPSC lines from patients with mutations in the SNCA gene that encodes α-synuclein.

The Role of Consortia
One of the largest multi-institution iPSC efforts draws support from the National Institute of Neurological Disorders and Stroke (NINDS). With funds from the American Reinvestment and Recovery Act, NINDS is supporting three consortia with the goal of creating iPSC lines from familial forms of HD, PD, and ALS, wrote Margaret Sutherland, program director at NINDS, in an e-mail to ARF. Each consortium will contribute fibroblasts and iPSC lines to the NINDS Repository at Coriell. The lines will be provided to academic and not-for-profit investigators at cost. Sutherland said that one of the consortia’s goals is to generate well-characterized cell lines, including profiles of gene expression and epigenetics (see ARF related news story on NIA epigenetics research). Some of the lines may include cell-specific reporters to allow scientists to monitor the differentiation state of the cells. The consortia have also been charged with developing criteria to define high-quality iPS cell lines, Sutherland said. Each consortium is working on a two-year time frame that will be completed 1 October 2011. To date, each consortium has deposited about 10 to 15 cell lines with Coriell, Sutherland said, and these lines may become available to academic and industry scientists in early 2011.

The HD consortium is led by Leslie Thompson at the University of California, Irvine, and includes co-principal investigators Steve Finkbeiner, Clive Svendsen, Chris Ross, Marcy MacDonald, and Jim Gusella, at institutions around the country. The group will look at a series of increasing CAG repeat lengths and examine the associated phenotypes, Sutherland said. The PD consortium is under the charge of Ole Isacson at Harvard and includes co-PIs Virginia Lee, John Trojanowski, Ted Dawson, Jim Surmeier, and Karen Marder, from several institutions. See Part 3 of this series for a discussion of the ALS consortium, and neurodevelopmental iPSC lines.—Madolyn Bowman Rogers.

This is Part 2 of a four-part series. See also Part 1, Part 3, and Part 4. Download a PDF of the entire series.