As with many neurodegenerative diseases, predicting survival time in patients with amyotrophic lateral sclerosis (ALS) is a tricky business. The disease has widely differing rates of progression and can begin anytime from mid- to late life. These variations probably reflect a complex etiology driven by both genetic and environmental factors. For one small subset of patients—those carrying mutations in the superoxide dismutase (SOD) gene—an accurate prognosis may have just gotten a little easier. In the July PLoS Biology, Jeffrey Agar and colleagues at Brandeis University, Waltham, Massachusetts, report that they can predict patient survival based on the biophysical properties of the mutated proteins. SOD variants with a greater propensity to aggregate and greater inherent instability predict shorter survival times, according to the researchers. The findings not only have practical value in that they may help ALS patients and caregivers manage the disease, but they also add to the ongoing debate about the pros and cons of protein aggregates. The bottom line, Agar told ARF, is “having any sort of aggregate is worse than having no aggregate.”

In other ALS news this week, researchers led by Kevin Eggan at Harvard University and Christopher Henderson at Columbia University Medical Center, New York, report a potential breakthrough for cell-based ALS research. Writing in tomorrow’s Science, they describe how they reprogrammed skin cells from elderly ALS patients, turning them into pluripotent stem cells that they then coaxed to form motor neurons, the very cells that degenerate in this disease. Currently, there is no way of culturing motor neurons directly from humans, so studying these derived motor neurons in culture should give researchers an early glimpse into what makes these cells deteriorate and die. They hope that such studies may open the door to new treatments.

SOD and Survival
Mutations in the SOD1 gene only account for about 2 percent of all ALS cases, but the discovery of the mutations in 1993 was a breakthrough for scientists trying to get a handle on the disease. Since then, over 100 SOD1 mutations have been linked to inherited familial ALS (fALS) and while all the mutated proteins seem to form large protein aggregates, exactly how these aggregates tie in with pathology has been debated. Some theories suggest that it is not aggregation of the protein that causes disease, but aberrant activity (see ARF related news story) or downstream effects such as mitochondrial-induced apoptosis (see ARF related news story).

If aggregation of SOD1 is important for disease pathology, then the rate of aggregation may impact disease onset or progression. To test this theory, Agar, first author Qi Wang, and colleagues compared aggregation propensity with survival times. To calculate how quickly the mutant proteins aggregate, they turned to a mathematical equation first introduced by Chris Dobson at the University of Oxford, England (see Chiti et al., 2003). The equation is based on three inherent properties of proteins: hydrophobicity; secondary structure, including α-helices or β-sheets; and net charge. Wang and colleagues first confirmed that the Chiti-Dobson equation was valid for SOD1, by comparing theoretical aggregation rates with empirically derived data. They then used the validated equation to calculate aggregation of 20 fALS SOD mutants. “When we calculated how fast they should aggregate and asked do those faster aggregating proteins result in faster patient death, the answer was a resounding yes,” said Agar. The faster aggregating proteins were associated with shorter survival after disease onset.

But the story does not stop there. Agar and colleagues also wondered how the stability of protein conformation fits into survival, since the Chiti-Dobson equation assumes that the proteins are unfolded from their native state to begin with. Might proteins that are inherently more unstable and more likely to unfold aggregate faster and cause even more rapid onset? “What we found next was one of those times when you are very happy to be a scientist,” said Agar. The researchers discovered that not only did protein instability contribute to survival time, but that it worked synergistically with aggregation propensity. “The two together are greater than the sum of the parts,” he said.

Wang and colleagues found that together, protein aggregation and protein instability account for 69 percent of the variation in survival associated with different SOD1 mutations. Whether these parameters are also related to time of disease onset is not yet clear. Agar said that until recently scientists did not know how to calculate when proteins “nucleate” or begin the process of aggregation. “That was a Pandora’s box, but we think we know how to do that now, and we plan to look at that aspect.”

Should this study hold up, it should help patients and caregivers manage their disease. There are some caveats, however. Agar admitted that one of the uncertainties is the nature of the patient data used to calculate survival times. Not much is known about patient history, comorbidities, etc. What is known is that in the case of some mutations all the patient carriers were from the U.S. and in other cases they were all from Japan. This geographical relationship suggests that there could be underlying genetic, environmental, or caregiving factors that complicated the data.

Using a protocol for “reprogramming” cells (see Takahashi et al., 2006), joint first author John Dimos and Kit Rodolfa induced skin fibroblasts to form pluripotent stem cells. The reprogramming involves adding just four different factorsr—Oct4, Sox2, c-Myc, and Klf4. There has been some controversy as to what factors are needed to reprogram adult cells, but in a teleconference Eggan said that this work helps to set the record straight, that the original protocol devised by Shinya Yamanaka at Kyoto University, Japan, works.

Having made induced pluripotent stem (iPS) cell lines from patient fibroblasts, the authors next tested if the cells could form a variety of differentiated cell types. When plated in suspension culture, stem cells form embryoid bodies that are composed of diverse cell types, and Dimos and colleagues found that is true when they cultured the iPS lines, too. After treating these embryoid bodies with sonic hedgehog and retinoic acid, factors that drive formation of neural lineages, the authors found cells that stained positive for neuronal type of tubulin—β-Tubulin IIIb. Among these the researchers identified cells containing the motor neuron-specific marker HB9 (see image below). Many of the HB9-positive cells also expressed choline acetyltransferase, suggesting some degree of cholinergic maturation. 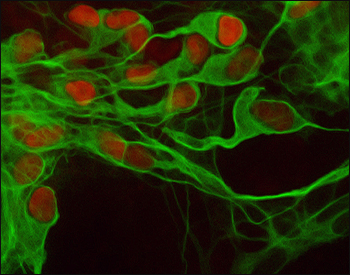 In addition to confirming the value of the Yamanaka protocol for reprogramming skin fibroblasts, this study also shows that not only is it possible to derive induced pluripotent stem cells from older adults, but that it is possible even if those adults are ill with a neurodegenerative disease, said Eggan in a teleconference. This will be particularly welcome news to researchers who may want to try the same strategy to study the types of nerve cells that are damaged in Alzheimer, Parkinson, or other neurodegenerative diseases.

One thing these cells will not be useful for is therapy. Because the four reprogramming factors are introduced into fibroblasts on viral vectors, that viral material is still part and parcel of the cells’ genome, so it would be unsafe to place such cells back into humans. For this reason, it is important to continue research into somatic cell nuclear transfer, commonly called cloning, suggested Eggan. Currently, a major obstacle to that strategy is federal regulation.

Both Eggan and Henderson pointed out that there is much to be done before these cells will offer up any answers about ALS. It is not clear, for example, if they will degenerate in the same way in a culture dish as they do in vivo, since other cell types, such as glia, may contribute to ALS pathology (see ARF related news story). The researchers noted that they have also cultured astrocytes from the iPS cells and can use those to mimic the glia-neuron interplay found in the human nervous system. Another caveat is that these cells are derived from fALS patients with SOD1 mutations, which comprise only 2 percent of all ALS patients, so it is not clear how any findings will relate to the majority of patients. But, as the authors write, “Patient-specific iPS cells generated from individuals with sporadic disease would carry the precise constellation of genetic information associated with pathology in that person.” Should derivation of iPS cells become routine, it could herald a totally new approach to personalized medicine.—Tom Fagan