Aβ is infamous for its ability to form large fibrils rich in β-sheet secondary structure. In contrast, soluble monomeric Aβ is totally different and thought to assume random or α-helical structures. But in this week’s PNAS, researchers led by Torleif Härd at the University of Goteborg, Sweden, debut a monomeric Aβ structure that has a β-sheet hairpin loop. The structure is courtesy of a protein ligand, or affibody, that has high affinity for Aβ monomers. This ligand, called ZAβ3, surrounds Aβ1-40, stabilizing the β-sheets. The latter are uncannily similar, though not identical, to the β-sheet hairpin loops of amyloid fibrils. “The discovery of this hairpin leads to possible mechanisms for oligomer and fibril formation, and the binder itself is very exciting because it has practical uses in research and also as a basis for therapy,” said Härd in an interview with ARF. Whether this structure occurs alone in solution, much less in vivo, or is partly driven by the affibody will need to be tested in future studies.

Affibodies were engineered at the Royal Institute of Technology, Stockholm, and are now patented and developed by Affibody AB, Bromma, Sweden. They are derived from the Z domain of staphylococcal protein A, which binds avidly to the Fc stub of immunoglobulin G. Two helices of the Z domain can be randomly changed to generate a wide range of binding surfaces, much like the variable chains on antibodies. For example, some affibodies bind with high affinity to insulin, TNFα, and ErbB2, which is overexpressed in some breast cancer cells. Last year researchers at Stockholm University reported that they had generated affibodies to Aβ (see Grönwall et al., 2007), and it is these ligands that Härd and colleagues studied at molecular resolution.

First author Wolfgang Hoyer and colleagues characterized the 16 Aβ affibodies that the group in Stockholm had generated. They report that all of them need a cysteine residue at amino acid 28 (each affibody has 58 amino acids) for high-affinity binding, suggesting that the affibodies act as dimers held together by disulphide bonds. Binding stoichiometry supports that idea. A dimer of ZAβ3 binds 1:1 with Aβ at nanomolar affinity. NMR data support this structure, too. The researchers obtained high-precision NMR spectra that show, at atomic resolution, Aβ buried in a cavity formed by a ZAβ3 dimer. Residues 17-36 of Aβ form a β-sheet hairpin loop that is stabilized by the hydrophobic core of that cavity (see figure below). 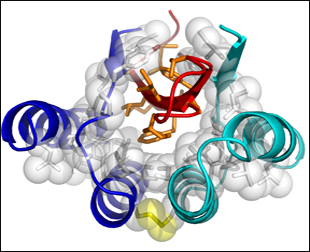 High-precision NMR Structure of Aβ-ZAβ3
A dimer of ZAβ3 (blue, turquoise), linked by a disulphide bond (yellow), forms a high-affinity complex with Aβ1-40. Residues 17-36 of Aβ (red) form a β-turn-β hairpin loop in the hydrophobic core of the complex. Aβ hydrophobic side chains exposed to water are shown in orange. Image credit: National Academy of Sciences, PNAS © 2008

The authors write that this is the first high-resolution structure of soluble Aβ in β conformation. Previous structural determinations of Aβ monomers have been based on only portions of the molecule (see ARF related news story), suggest random coil or helical structures (see, e.g., Miles et al., 2008), or have been obtained in lipid micelles (see, e.g., Rangachari et al., 2007). “This is an interesting structure of another monomeric conformation. It has some resemblance to the fibril structure in that the same regions that form extended strands in the fibril also form β strands in this monomer,” said Charlie Glabe, University of California, Irvine, in an interview with ARF. (Glabe and colleagues are pursuing antibody-based strategies to stabilize and study Aβ oligomers.)

The difference is that in this structure, the β strands bind each other within the Aβ molecule, whereas in fibrils they bind strands on different Aβ molecules. “This is what we think people might find interesting,” suggested Härd, and in fact the authors used this difference as a basis for proposing a model of aggregation. Their model predicts that Aβ monomers, with intramolecularly bound β-sheets, layer upon one another before undergoing a concerted 90-degree rotation around their strand axes (much like closing Venetian blinds), which would effectively switch the bonding from intra- to intermolecular. Glabe questioned whether this conformation change could work without dissociation. “Basically, every strand in the soluble oligomer intermediate would have to rotate 90 degrees coordinately, in the same direction, at the same time,” he said.

It is also not clear if the Aβ β-sheet structure would form in the absence of the ZAβ3 ligand, given that such an Aβ conformation would expose a considerable amount of hydrophobic side chains to the solvent, though there is evidence it might. In phage display, which is how the researchers isolated the affibodies, this β structure seems well represented. “We find that when you select for binding, in 16 cases you select a very well-defined hairpin structure of Aβ, so that structure is available to the monomer,” suggested Härd. And the affibody may explain why others have not seen a similar monomeric structure. “If you look at antibodies, they usually bind to several different aggregates and not just the monomer, or they bind just to the N-terminus, so I think it is this affibody that lets us see Aβ in this confirmation so nicely,” added Hoyer.

Affibodies are currently being used for diagnostic purposes and as a potential cancer therapy. One other interesting property of the affibody is that it is a potent inhibitor of aggregation. It is unclear whether Aβ affibodies might make useful therapeutics for AD. They do not readily cross the blood-brain barrier and would likely be immunogenic, but Härd and colleagues are exploring if they can ameliorate toxicity in fruit fly models of AD. “From a biotech point of view, it really adds another example of protein engineering as an alternative to immunotherapy or antibody-based methods. There are many tracks this research could take, but the most important is to bring this whole system into in vivo conditions to see what can be found,” said Härd.—Tom Fagan