The 8th International Winter Conference on Alzheimer’s Disease, held 7-10 December 2012 in Zuers, Austria, featured alternative treatment approaches that are trying to reach the starting line for clinical trials as some of the more advanced therapies have underwhelmed in Phase 2 and 3. Take NeuroPhage in Cambridge, Massachusetts. Funded in 2007, this biotech company is trying to turn a filamentous phage into something of a pan-therapy for neurodegenerative diseases marked by amyloid deposits of misfolded proteins. In Zuers, NeuroPhage’s Kimberley Gannon rattled off a rapid-fire list of experimental results. She tried to prove to the research community that her company’s work turning a bacteriophage into a therapy has come in from the lonesome fringes of research. Gannon said the therapy is holding its own when subjected to the scrutiny of established research assays applied internally and in a variety of external collaborators’ laboratories.

Last year, Alzforum reported from a conference in Sweden on data showing the phage’s ability to dissolve Aβ plaques and remediate behavior in some mouse models of Alzheimer’s amyloidosis (see prior ARF related news story). In Zuers, Gannon expanded on these findings, claiming that the phage works for tau, α-synuclein, and other fibrils. “We hope to treat Alzheimer’s, Parkinson’s, dementia with Lewy bodies, and multiple orphan diseases such as tauopathies,” Gannon said. She also said the company has pinpointed its mechanism of action and is building it into a new biological therapy that isn’t saddled with the perceived "ick factor" of what is, after all, a virus.

The bacteriophage M13 is a harmless wisp of DNA and protein about one micrometer long and 6 nanometers wide. M13 surrounds human life. Found in tap water, it infects E. coli in the gut of mammals and is sometimes even deployed in sewage treatment plants. Bacteriophages were used to fight bacterial infections in the former Soviet Union and Eastern Europe in the decades before the modern era of antibiotics, and later drew renewed interest as a potential niche therapy in the face of multidrug-resistant bacteria (see NYT Sunday Magazine, 2000; Stone, 2002; Matsuzaki et al., 2005). 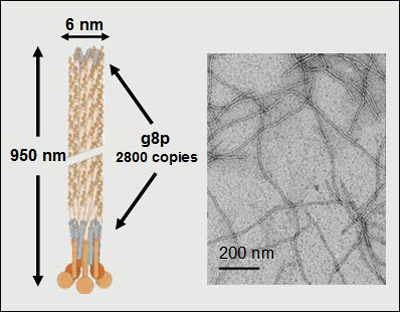 Unlike some other types of phage, M13 does not carry genes for toxins. It has a long record of being innocuous to humans, and in NeuroPhage’s hands, as well, experiments in some 300 aged transgenic mice and a dozen monkeys thus far have flagged no safety concerns. “We have done extensive safety studies and have no adverse findings. We also always look for microhemorrhage in APP-overexpressing mice, for example, and have found none,” Gannon said. These were transgenic mouse safety, tolerability, and monkey toxicology studies; separate toxicology studies done according to good laboratory practice (GLP) standards will start in 2013, said Gannon.

Will regulators bless a bacteriophage as an AD therapeutic? They responded positively in three meetings held in 2011 and 2012 with the FDA and requisite agencies in France and Sweden, Gannon claimed, saying that an IND will follow the outstanding toxicology data in early 2014.

In Zuers, Gannon said the phage, trademarked as NPT002®, performed well in more than a dozen different assays. It binds Aβ fibrils in vitro, and co-localizes and dose-dependently disrupts them in vivo. It also destabilizes fibers made of tau, α-synuclein, and yeast prion in a filter retention assay, and remodels such fibers in detergent solubility assays. Adenylate kinase toxicity assays showed protection from cytotoxicity against Aβ oligomers prepared as per Stine et al., 2011, and tau fibers as per Gamblin et al., 2000. Binding, assembly inhibition, and fiber destabilization have been shown for Aβ, tau, and α-synuclein using several different assays for each parameter, Gannon said. That work is ongoing for prion protein and SOD1 fibers.

The phage reduces Aβ load within days of injection into the brain in the PDAPP, 3xTg, APPSweLon, and Tg2576 mouse models, Gannon said. The effect of a single dose lasts for six weeks. More recently, much the same findings on tau came out of studies of the Tg4510 and 3xTg mice. The same was found on α-synuclein in two mouse strains in studies performed in the laboratory of Eliezer Masliah at the University of California, San Diego. In a large dose-response study funded by the Michael J. Fox Foundation, the treatment reduced α-synuclein, increased tyrosine hydroxylase levels, and improved motor function, Gannon said.

How might the phage do this? In the past year, researchers at NeuroPhage cloned and expressed a 25 kDa active motif on M13. They studied its structure-activity relationship and, with NMR, defined the key peptide residues as a basis for making a second-generation compound. Gannon did not show what those residues are, but said that an IgGFc fusion molecule containing them—basically an antibody engineered to display recombinant phage bits as its antigen binding site—seems to be as potent as the phage itself at reducing plaque in hippocampus and cortex of transgenic mice. A head-to-head comparison has not been done yet.

This IgGFc fusion protein, researchers said at the conference, puts NeuroPhage more in line with other immunotherapies, and might overcome lingering resistance on the part of physicians (and clinical trial funders) to using phage. The fusion protein is behind the phage in terms of its preclinical characterization, and would compete with other antibodies that are wending their way through the clinical pipeline. Even so, countered Gannon, the IgGFc fusion molecule, if it behaves as the phage, would dissolve all major aggregates implicated in age-related neurodegeneration, and in this way might address the mixed pathology frequently seen in AD, DLB, and PD.

A big hurdle NeuroPhage faces at present is that researchers will have to inject the phage directly into the CSF to get a therapeutic dose of it into the brain. In the U.S., where physicians treating AD patients, and even some specialized research physicians, are famously loath to perform lumbar punctures—and receive little training for the procedure—any invasive therapy for age-related neurodegenerative disease faces an uphill battle. "Nice data, but the delivery is a problem," was the general tenor of opinion at the Zuers conference. One scientist said that if current immunotherapies continue to fall short in the clinic, as have bapineuzumab and less so solanezumab, then direct-to-brain delivery of phage might become more widely accepted.

Clinicians who frequently perform lumbar punctures see it more positively. “In principle, I am interested in performing a trial. I would need a great deal more information. Will it be given through an LP? Which volume? How many injections and intervals? Over how long a time frame? How to insure sterility? But the idea is good, and if these questions are answered, such a project may be possible in Sweden,” said Niels Andreasen, who heads the department of Clinical Drug Research at Karolinska University Hospital in Huddinge, Sweden, and serves as national coordinator of Alzheimer’s clinical trials in that country.

To study delivery methods, NeuroPhage scientists contracted with Northern Biomedical Research, an animal research company in Michigan, and with scientists at Massachusetts General Hospital, Rush University in Chicago, and the National Institutes of Health (see Ksendzovsky et al., 2012; Papisov et al., 2012). These groups compared how bolus dosing into the intrathecal space in the lower back—basically a lumbar puncture with injection of drug—compared to continuous infusion or injection directly into the brain. Using immunohistochemistry, whole-body positron emission tomography, and quantitative PCR in monkeys, they determined that a bolus injection of one milliliter of phage solution distributed broadly throughout the cortex and subcortical brain areas at exposure levels sufficient to expect a drug effect. “We will go into human trials with lumbar intrathecal bolus,” Gannon said. For more details, see Q&A below.

“There is resistance to lumbar punctures for CSF collection, especially in non-Scandinavian countries. If that slows enrollment into a trial, I predict that intrathecal bolus delivery might be even harder. But it is not out of the question,” said Enchi Liu with Janssen AI. For more on this issue, read the Q&A with Gannon below.—Gabrielle Strobel.

Q: What would this treatment look like in people? Would patients see their doctor for an intrathecal injection every month? Every quarter? Would they get a port implanted once and live with it, and get a bolus at a local clinic every so often? Help us picture it.

A: We are anticipating intermittent dosing with an inter-dose interval that will be estimated initially from the imaging data in the Phase 1 trial. Since we know that the significant effect on reducing Aβ lasts for over six weeks in an aggressive model of plaque deposition (18- to 20-month-old female Tg2576 at injection), and that human plaque deposition is much more gradual, we anticipate a fairly long inter-dose interval. This is hard to predict, but we anticipate it to be three months or longer. If the data support that, IT bolus is a feasible route of administration.

Q: Would NPT088 be administered intrathecally, too?

Q: Are all your mouse studies single dose? What about long-term data?

Q: Were the animal studies blinded? We often hear that preclinical mouse studies should be blinded just like drug studies, such that the investigators/collaborators do not know if they handle drug or placebo.

A: Yes, we always run our animal studies blinded, both behavior and analyses. The drug vials are shipped with labels indicating test article or vehicle for injections. However, all animals are coded with respect to the treatment that they received so that anyone running behavioral assessment or looking at brain tissue is blinded to treatment. The individuals doing the injections are never the same individuals performing behavioral testing or conducting the neuropathological evaluations. Therefore, behavioral testing and the neuropath analyses are conducted in a blinded fashion. Behavioral testing and neuropath analyses typically occur around five to 14 days post-injection.