In a snowy mountain town in Austria, 75 scientists met from 7-10 December 2012 for the 8th International Winter Conference on Alzheimer’s Disease. They traded data and discussion of treatment approaches in the kind of cooped-up, homey atmosphere that brings down barriers when a diverse group of scientists stay together from breakfast until dinner to present, question, and debate science. (Yes, skiing in Zuers is great but, unlike in Keystone, the scientific program called for a daily 8 a.m. to 7 p.m. marathon, and the conference is so small that folks would notice if you played hooky on the slopes.) Started 10 years ago, this meeting is organized by Manfred Windisch of the contract research organization QPS, formerly JSW, in Graz, Austria, with help from Abraham Fisher and Ezio Giacobini. “The intention is to complement the big meetings with a small, interactive one where you can network and maybe start new projects,” said Windisch. 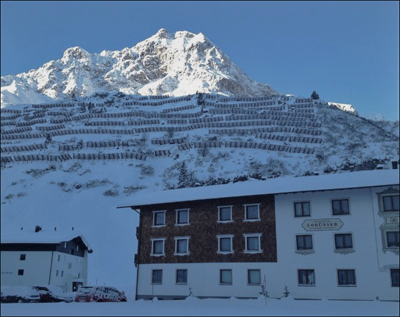 The sun illuminates the mountaintops as it rises over the town of Zuers. Image courtesy of Gabrielle Strobel

The meeting started off with Niels Andreasen, who heads the Department of Clinical Drug Research at Karolinska University Hospital in Huddinge, Sweden. His center runs some 20 intervention studies at any given time, half sponsored by industry and half by the European Union or other sources. On the approved cholinesterase inhibitor drugs, Andreasen cited a three-year trial, a three-year open-label comparison of treated patients versus historical controls, and his personal experience treating patients to say that these medications are better than their reputation (Minthon et al., 2009). “The drugs do have a real effect,” Andreasen said. Combination therapy of cholinesterase inhibitors and memantine is not approved in Sweden, but Andreasen noted that clinical practice in his country has shifted toward using this combination, in part because of a U.S. study reporting that combination therapy delayed nursing home placement (Lopez et al., 2009). “Nursing homes are much more expensive than these treatments. It is both better for the patient and more cost effective for society if patients can stay in their homes,” said Andreasen.

Besides anti-amyloids, drugs tested at Andreasen’s site that have been largely negative include NSAIDs, estrogen, antioxidants, rosiglitazone, lithium, gingko biloba, and various nutraceuticals. Gingko has been definitively shown not to work (see ARF related news story), but omega 3 fatty acids generated a signal in early-stage patients and are now being retested as part of the Lipididiet®/Souvenaid® program (see ARF related news story).

Discussing recent trial setbacks, Andreasen shared these observations: The scyllo-inositol trial saw deaths in the highest-dose groups, and the Rember® trial was not truly double-blinded because the study drug colors urine. Insufficient blinding may have had a hand in the apparent success of Dimebon in Phase 2. In Phase 3 at his Karolinska site, Andreasen said, “I could see who was on drug, because Dimebon, being an antihistamine, makes people tired.” From his vantage point, the preponderance of negative trials over the past decade reflects that neither drug selection nor dosing and treatment duration have been optimized in the AD field.

Andreasen urged the field to test combination therapy, such as an antibody and a BACE inhibitor, and move toward tailored, individualized therapy. Alzheimer’s dementia is the endstage of a group of diseases that are still often misdiagnosed even in dementia clinics (Beach et al., 2012). This may be due in part to the mixed pathologies and extensive vascular damage apparent on autopsy. Neuropathologists have said this for many years. In Zuers, Kurt Jellinger of the Institute of Clinical Neurobiology in Vienna, Austria, updated the audience by saying that newer molecular pathology techniques have reconfirmed this old finding. As the Viennese scientists see it, significant mixed pathology is present in up to 70 percent of cases diagnosed with dementia during life. Therefore, a range of drugs must be developed for different types of patients, Jellinger believes. One common theme echoing through the conference was that biomarkers should be used more widely to enrich trial populations for the particular aspect of Alzheimer’s disease the drug is thought to target, and to generate much more data on the theragnostic potential of a given marker-drug pairing.

That the disease starts some 20 years before symptoms clearly implies that the presymptomatic patient has AD, Andreasen said, but old diagnostic criteria did not allow for that to be recognized. “This is like watching a drowning man stick up his arms for a rescue buoy and saying: ‘No no, I need to see a blue face before I know you are drowning,’” Andreasen said. “It was, therefore, with great enthusiasm that I read the Dubois criteria. They took us from exclusion to inclusion” (see ARF related news story on Dubois et al., 2007). Since then, longitudinal CSF biomarker studies have shown that it is possible to identify people who will go on to develop AD dementia eight years before they would have met the old diagnostic criteria, Andreasen said.

On biomarkers, Andreasen urged the field to work to overcome the reluctance, particularly of general practitioners, to use lumbar punctures (LP). An LP costs €100 compared to an amyloid scan’s thousands, and in the hands of a trained neurologist is no more dangerous than the radioisotope injection, he argued. “Widespread fears about lumbar puncture in some countries are misplaced,” Andreasen said, citing four published studies about headache, the only proven side effect of the procedure that put its incidence at 0.9 to 4 percent. That rate improves when the physician uses a needle that requires no drawing but allows the CSF sample to drip out on its own, Andreasen said (see ARF Webinar). There are no publications about paralysis or infections produced by lumbar punctures. That said, the unrelated recent U.S. meningitis scandal caused by fungus-infested steroid injections into the spines of people with chronic pain may reinforce those fears in the minds of patients and of physicians, many of whom have little training in lumbar puncture.

With regard to infections, Andreasen said, a lumbar puncture can actually provide helpful information at trial screening. He cited the examples of a 70-year-old man and of a female hairdresser who both met inclusion criteria for an AD immunotherapy trial. Their LP showed that they had Lyme neuroborreliosis, a neuroinflammatory condition that needs to be treated. Their Lyme disease could have confounded these patients’ response to the immunotherapy, and side effects would likely be attributed to the immunotherapy (Andreasen et al., 2010).

At the scientific level, CSF samples taken in the course of clinical trials yield insight into new pharmacodynamic biomarkers for drugs, said Erik Portelius of the University of Gothenburg, Sweden. In Zuers, Portelius summarized ongoing work to define theragnostic biomarkers for AD drug development by combining targeted proteomics with SRM mass spectrometry. For example, analyses of mouse, dog, and human CSF in response to various drugs targeting APP processing indicate that Aβ37, 40, and 42 are useful pharmacodynamic markers for γ-secretase modulation. Aβ15, 16, and 34 are markers of γ-secretase inhibition, and Aβ5-40 may be a new marker of BACE-1 inhibition. What role, if any, these new forms of Aβ may play in Alzheimer’s disease the scientists do not yet know. Even so, monitoring these isoforms in early-stage clinical studies could help researchers decide which drugs to take forward into larger, more expensive trials, Portelius added.

In Zuers, researchers reviewed preclinical data of three immunotherapies that are incorporating biomarkers in ongoing Phase 2 and 3 trials (see prior ARF stories on gantenerumab, Q&A With Luca Santarelli, on BIIB037, and BAN2401). Hansruedi Loetscher of Roche in Basel, Switzerland, noted that the biomarker packages for bapineuzumab and solanezumab were too limited for these programs to have fully tested the amyloid hypothesis. Most trials have CSF and amyloid PET substudies on too few participants for the resulting data to settle open questions. For Roche’s gantenerumab, a previous Phase 1 dosing study indicated an 11 percent difference in the amount of amyloid change between placebo and the higher dose at six months, but that group had only 16 participants. In gantenerumab’s ongoing Phase 2/3 trial of 770 patients, amyloid PET scans are to be done on a substudy of 90 participants. So far, baseline PET scans indicate, at least, that the trial is not enrolling many amyloid-negative participants, said Loetscher said, who expects outcome data in 2015.

BIIB037 is currently in Phase 1b testing with Biogen Idec of Cambridge, Massachusetts. It was developed at Neurimmune in Schlieren, also in Switzerland. In Zuers, Jan Grimm of Neurimmune recounted this antibody’s generation from a healthy cohort of very old donors with intact cognition. Grimm noted that the researchers also found antibodies against tau, α-synuclein, and TDP-43 in these volunteers. “It is amazing what the human immune system is producing in people resistant to these diseases,” Grimm said. BIIB037 is an IgG1 that binds to aggregated forms of Aβ but not monomer. In the brain, BIIB037 preferentially binds parenchymal over vascular amyloid, and after chronic dosing in older mice, plaques of all sizes shrank, but vascular amyloid stayed unchanged. Dosing and brain exposure studies in mice suggest that microhemorrhages do not happen up until a dose more than 100 times higher than the minimally effective dose, Grimm added.

As is true for gantenerumab, microglia become recruited and clear amyloid with BIIB037 treatment via an Fc receptor-mediated mechanism. In the current Phase 3 gantenerumab trial, people with prodromal AD get a monthly injection under the skin. BIIB037 is delivered by IV, and while Grimm anticipates no more than monthly delivery for this antibody, too, defining a suitable regimen is a goal of the current trial in prodromal AD.

Whereas Grimm’s company developed a particular natural antibody from donors into a recombinant biologic, plasma manufacturers are pushing into the Alzheimer’s therapy market with intravenous immunoglobulin (IVIG), a pooled product. IVIG reflects the cumulative antigen exposure of the thousands of donors whose plasma gets pooled in the manufacturing process. Baxter’s IVIG, called Gammagard, is arguably the most advanced potential Alzheimer’s therapy at present. Of its two Phase 3 trials (NCT00818662 and NCT01524887), one is due to read out in early 2013. But it is not alone. Sensing an opportunity, other plasma manufacturers are moving in. Octapharma, Grifols Biologicals, Inc., and Sutter Health are already testing their own plasma products in Phase 2 or 3 trials in Alzheimer’s and mild cognitive impairment, and Behring AG in Bern, Switzerland, is entering the fray.

Much of the published research on immunoglobulin in Alzheimer’s has focused on its possible effects on Aβ. In Zuers, Susann Cattepoel of CSL Behring AG said she is taking a closer look at what her company’s IVIG product might do in AD. She is finding that it, too, contains a small but active anti-Aβ component. Cattepoel said that affinity purification of CSL Behring’s Privigen® showed it indeed contains 0.1 percent of polyclonal Aβ antibodies. They bind to synthetic Aβ oligomers and are active in various established Aβ assays of fibril formation, toxicity, and LTP inhibition. These anti-Aβ antibodies, as well as—less potently—total IVIG, activated microglial phagocytosis, Cattepoel said.

Beyond that, however, it is likely that IVIG exerts whatever effect it may have on Alzheimer’s disease, at least in part, via its broad anti-inflammatory mechanisms of action. IVIG inhibits complement-mediated damage, modulates the production of cytokines away from the inflammatory ones such as Il-1b and IFN-γ, and increases expression of genes linked to reduced production of radical oxygen species.

Discussion about microglial activation pervaded the Zuers conference. How strong does it need to be to phagocytose pathology without causing collateral damage? How can therapies turn on phagocytic activation while avoiding cytokine-spewing activation? What role might the pathways of the microglial receptor TREM2, and other innate immunity genes implicated in AD, play in a person’s response to drug treatment? At this conference, on Alzforum (see ARF Webinar on neuroinflammation), and in research groups around the world (see ARF related news story), these questions are moving to the top of the agenda.—Gabrielle Strobel.