As trialists are retooling in the face of disappointing results in Alzheimer’s disease (AD), researchers in frontotemporal degeneration (FTD) are learning from AD woes and gearing up to take a seat in the front row. This year’s 4th International Conference on Clinical Trials in Alzheimer's Disease, (CTAD), held 3-5 November 2011 in San Diego, California, included a session on preparing for treatment trials in FTD. Presenters made the case that trials in FTD may stand a better chance of succeeding than those in AD. As research has uncovered many molecular pathways common to FTD and related disorders ranging from the common (AD) to the rare amyotrophic lateral sclerosis (ALS), any treatments developed for FTD may have broad applications and energize the field of neurodegeneration as a whole.

The session at CTAD represented the third meeting of the fledging FTD Treatment Study Group (FTSG). Since its inception in 2010 the group has been trying to drum up interest from pharmaceutical companies in conducting FTD trials (see ARF related news story). The reason for holding the meeting at CTAD was to catch a “broader audience who might not be involved in the FTD field at the moment,” said David Knopman of the Mayo Clinic in Rochester, Minnesota. “We wanted to see if we could attract clinical trialists from other areas and pique their interest by highlighting some of the new developments in FTD.”

The meeting also marked the beginning of FTSG’s formal association with the Association for Frontotemporal Degeneration (AFTD), a not-for-profit advocacy group that will serve as FTSG’s home, at least initially. “Being adopted by AFTD will allow us to grow and raise funds to help foster FTD drug development,” said Adam Boxer, University of California, San Francisco, who leads the FTSG. The funds will be used, for example, to encourage companies to share compounds that they might have otherwise abandoned so that they can be tested in FTD animal models. The funds will also help educate regulatory agencies about FTD-specific issues, further develop clinical trial methods, and create a patient registry, explained Boxer.

One of the main developments in the FTD field is that the molecular biology of the disease has been cracked open. “When I started to work in this area six years ago, we just knew about tau, but there have been such advances in our knowledge since then. As far as the genetic basis of disease, I think we virtually solved it. There are still many questions about how the different genes and proteins interact and how they lead to neurodegeneration, but we know who the main players are,” said Ian Mackenzie of the University of British Columbia in Vancouver, Canada.

In the “old” days, FTD—which is actually a group of diseases—was defined according to clinical criteria. Most people with FTD have behavioral variant FTD (or bvFTD), which degrades a person’s social skills and emotions. The next major category is semantic dementia, which hollows out their language; people can speak but no longer know the meaning of words. On the other hand, people with progressive nonfluent aphasia (PNFA) cannot speak fluently even though they know the meaning of the words they are trying to say. Finally, corticobasal degeneration (CBD) and progressive supranuclear palsy (PSP) are characterized by muscle weakness, rigidity, and/or parkinsonian symptoms.

More recently, researchers have adopted a classification of FTD based on the types of proteins that aggregate in cells (Mackenzie et al., 2009; Cairns et al., 2007; see also ARF related news story). The proteins involved are thought to play a role in the disease process, and are thus obvious targets for therapies. 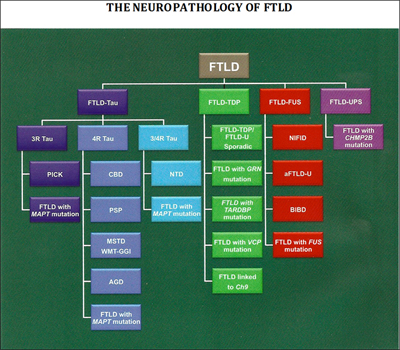 Researchers have uncovered many of the genes and proteins that play a role in FTD, leading to a new classification of disease based on its molecular pathology. Image credit: Nigel Cairns View larger image.

About 40 percent of FTD patients have intracellular accumulations of an abnormal form of the protein tau. This group of conditions, known as frontotemporal lobar degeneration (FTLD)-tau, includes most cases of PSP and CBD, as well as Pick’s disease. For PSP and CBD, the deposits consist almost exclusively of isoforms of tau with four microtubule-binding repeats (4R tau; Dickson et al., 2010), whereas in Pick’s disease, deposits contain 3R tau. Both 3R and 4R tau accumulate in neurofibrillary tangles in AD. In about 50 percent of FTD patients, including most who develop the disease in combination with ALS, the protein that accumulates is the TAR DNA binding protein 43 (TDP-43) (see ARF related news story). These patients fall into the FTLD-TDP-43 disease category. In 2009, investigators identified that the final subset of FTD patients (about 10 percent) have accumulation of the ALS-linked protein fused-in-sarcoma (FUS).

How do the clinical and protein-based classifications match up against one another? In the most common form of FTD, the behavioral variant, there is no clear correlation between clinical and molecular subtypes, which presents a challenge for selecting patients for trials. But with other subtypes, the relationship is clearer. Patients with the clinical symptoms of PSP and CBD almost always have pure tau pathology. As a result, patients with these conditions have been selected for early trials of tau-based therapies.

Why not test those therapies in Alzheimer's patients first? After all, neurofibrillary tangles have been a defining pathology of AD for a century. In reality, only a minority of AD patients have pure amyloid and tau pathology; most also have concurrent vascular or Lewy body disease. These other pathologies could mask any beneficial effects of drugs that target tau in those patients. “Clinical trials in FTD could be used for de-risking tau-related approaches to AD. A win here would rejuvenate the entire industry,” said Jeffrey Cummings, Cleveland Clinic, Nevada, at the meeting.

Another advantage of conducting trials in FTD is that in about 10 percent of patients, the disease is caused by a genetic mutation inherited in an autosomal-dominant manner (see ARF related news story). “We are talking about mutations that have a substantial impact on disease,” said Howard Feldman of Bristol-Myers Squibb, Wallingford, Connecticut, and the University of British Columbia in Vancouver. In his presentation at CTAD, Feldman suggested that genetic patients are obvious candidates for FTD trials. For years, AD trials focused on sporadic disease and excluded people with autosomal-dominant disease, but now some researchers are rethinking that strategy (see ARF related news story and ARF news story). “In FTD we have learned from the AD experience, and we are planning trials in at least one autosomal-dominant diagnosis, that is, FTD caused by progranulin haploinsufficiency,” Boxer told ARF. “Since the molecular defect is clear in this form of FTD, we may be able to hit an early home run that will help pave the way for wins in more common forms of FTD.” But others caution that this strategy is less straightforward than it sounds. “I agree that it needs to be done. But it will be challenging because the number of patients is so small,” Knopman told Alzforum.

These advances in genetics have highlighted the many similarities between FTD and ALS, and a number of researchers now view these two as opposite ends of a disease spectrum (see ARF related news story). But the overlap does not end there. FTD also shares common molecular pathways with Alzheimer’s. Beyond tau, FTD and AD may share molecular pathways that involve TDP-43 and progranulin, according to Mackenzie.

TDP-43 pathology is detected at postmortem in 25 to 50 percent of people with AD, and one study suggests that polymorphic variants in the gene, although they do not cause AD, increase the risk for AD; however, other studies have not found this association (see AlzGene). For its part, progranulin is an antagonist of the tumor necrosis factor α receptor, and has potent anti-inflammatory effects in animal models of arthritis (Tang et al., 2011). At CTAD, Mackenzie presented a model whereby progranulin may be involved in protecting the brain against damage. “It could be that reduced levels of progranulin put you at increased risk for neurodegeneration in general,” he told Alzforum. According to his model, FTD patients with progranulin mutations cannot protect their brain from age-related stress and damage, which eventually lead to FTD. AD patients have other primary mechanisms of toxicity, but having less progranulin leads to a worsening of symptoms in them, too. “The model is that if you develop AD and have reduced levels of progranulin, you will have increased neurodegeneration,” said Mackenzie. Although he acknowledged the proposal is highly speculative, he believes it is possible that progranulin-based therapies will work in both FTD and AD, as well as in inflammatory diseases.

In addition to these recent advances in understanding the molecular pathology of FTD, this past year has seen the development of clinical guidelines for the disease and the creation of two imaging projects à la ADNI. (Read Part 2 of this series for an update on those efforts.) “All the pieces are falling into place for clinical trials in FTD. We now need to convince industry to share promising drugs,” said Boxer.—Laura Bonetta.

This is Part 1 of a two-part series. See also Part 2. Download a PDF of the entire series.