Disrupted sleep-wake cycles often accompany neurodegeneration, but scientists are unsure why. When do each of these processes start and how do they influence one another? In the March 11 JAMA Neurology, scientists led by David Holtzman, Washington University School of Medicine, St. Louis, Missouri, report that people’s quality of sleep deteriorates in preclinical Alzheimer’s disease (AD)—when amyloid is depositing but before cognitive symptoms arise. These results suggest the earliest link yet between Aβ pathology and sleep disturbance in humans. Meanwhile, Erik Musiek, a postdoc in Holtzman’s lab, finds that genetically disrupting the circadian clock in mice leads to oxidative stress and damaged neurons. His data point to a relationship between diurnal rhythms and neuronal destruction that is not mediated by Aβ. Musiek presented his results at the 11th International Conference on Alzheimer’s and Parkinson’s Diseases held 6-10 March 2013 in Florence, Italy.

Scientists have long known that people with AD and mild cognitive impairment (see McCurry et al., 1999, and Westerberg et al., 2012) have trouble sleeping. Until now, no one had looked at whether that problems occurs in people with preclinical AD. To find out, Holtzman and colleagues correlated brain amyloid deposition with sleep patterns in cognitively normal people. First author Yo-El Ju and colleagues recruited 142 volunteers with an average age of 65, and observed their sleeping patterns for two weeks. Each participant wore a watch-like device, called an actigraph, to record movement while they slept. The scientists calculated both total sleep time and the percentage of time in bed spent actually asleep, defined as sleep efficiency. Subjects gave a cerebrospinal fluid (CSF) sample within three years of that observation. Based on previous findings (see Fagan et al., 2006, and Fagan et al., 2009) anyone with a value of less than 500 pg/mL CSF Aβ42 was classified as having amyloid deposition in the brain.

Thirty-two people met criteria for likely amyloid deposition. Compared to the rest of the participants, these people slept less efficiently, woke up more often during the night, and trended toward taking more daytime naps. However, total sleep time was similar between both groups. “It suggests that people with amyloid deposition are not getting into deeper stages of sleep as much, and they wake up more frequently,” said Holtzman. More detailed tests will be required to prove that, he added. Impaired sleep efficiency could be an early functional biomarker of disease, since it precedes cognitive decline, wrote the authors.

Taken together, these findings suggest that sleep disturbances and amyloid may influence each other in a feedback loop, where either can initiate and drive the other. Related factors, such as obstructive sleep apnea and lowered physical activity, likely come into play as well (See figure below). 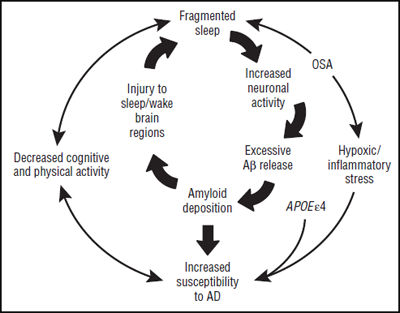 “It confirms a correlation between CSF Aβ levels and some sleep measures,” said Bettina Platt, University of Aberdeen, U.K. However, actigraphy is somewhat inaccurate, she said, arguing that sleep studies require electroencephalography (EEG), which gives more detailed information about stage and depth of sleep. Holtzman agreed and said that he plans to do EEG studies in people with both preclinical dementia and those with mild cognitive impairment. In addition, Platt said “the paper doesn’t offer anything to answer the burning ‘chicken and egg’ question of which [pathology] comes first.” The feedback loop model Holtzman’s group proposed would predict a higher rate of dementia among insomniacs, but no data exists to support that right now, she said. The cause-and-effect relationship is important to understand, because it will imply whether sleep therapy could stave off dementia, whether an erratic slumber pattern marks disease onset and progression, or whether sleep trouble is just another symptom of disease, she said.

While less accurate than EEG, actigraphy did detect a difference between groups and suggests a real relationship between low CSF Aβ42 and sleep efficiency, said Rebecca Spencer, University of Massachusetts, Amherst. This finding supports the idea that sleep fragmentation, more than just total sleep time, is important. Some people may sleep just as much as others but spend more time in light stages, which are less metabolically and cognitively restorative than deep, slow-wave sleep, “That has a lot of cognitive and physical outcomes because people are not getting that restoration,” she said. Spencer is interested in future studies that assess differences in sleep stage in the plaque-depositing population.

The sleep-wake cycle is controlled by the endogenous circadian clock, which regulates many cellular and physiological processes, such as control of free radical damage in peripheral tissues (see Kondratov et al., 2006). Do circadian genes also manage oxidative stress in the brain? To find out, Musiek and colleagues knocked out Bmal1, a master circadian clock gene, to obliterate circadian oscillation in mice. When the mice reached six months of age, the researchers found rampant neuronal oxidative damage, deregulated redox gene expression, astroglial activation, and synaptic damage in their brains. The same thing happened when researchers knocked out other circadian genes.

Interestingly, disordered sleep itself was not the culprit, said Musiek. Conditional knockouts that retained brain Bmal1 expression only in the suprachiasmatic nucleus, the master circadian timekeeper, slept and rose as did normal mice, but had similarly ravaged brain tissue. “This suggested to us that the clock working within neurons and glia is critical, regardless of how the whole animal is functioning,” said Musiek. Perhaps cellular clocks ramp up expression of genes that manage free radicals while the animal is awake, and slow production during sleep, he said. If that clock is disrupted, oxidative stress spirals out of control.

This process could link aging and human neurodegenerative disease, said Musiek. Bmal1 gene expression drops with age and circadian rhythms go out of whack in AD, Parkinson’s and Huntington’s diseases. “If you lose circadian function as you age, you may also lose your defenses against oxidative stress,” he told Alzforum. The researchers will next cross these circadian gene knockouts with APP transgenic mice to see how clock and sleep dysfunction together affect Aβ.—Gwyneth Dickey Zakaib