In neurons, APP-laden vesicles powered by kinesin motors ride from the cell body out to synapses. But is APP just a passenger, or does the protein sit in the driver’s seat? New work from Elaine Bearer of Brown University in Providence, Rhode Island, and the Marine Biological Laboratory at Woods Hole, Massachusetts, suggests the latter. In a study presented this month at the 36th annual meeting of the Society for Neuroscience (SfN) in Atlanta, Georgia, and published shortly thereafter in the October 24 PNAS online, Bearer and lead authors Prasanna Satpute-Krishnan, Joseph DeGiorgis and Michel Conley show that a 15 amino acid C-terminal peptide from human APP can recruit cargoes of synthetic beads to the fast axonal transport (FAT) machinery in squid giant axons. The results suggest that one physiological function of APP could be to direct axonal transport of vesicles or other cargoes, a process known to be compromised in Alzheimer disease (for a recent review see Stokin and Goldstein, 2006).

The squid giant axon was also on display at another presentation at the SfN meeting, this one by Gustavo Pigino from Scott Brady’s lab at the University of Illinois in Chicago. Following up on recent work showing that polyglutamate-expanded proteins inhibit FAT in extruded squid axoplasm (see ARF related news story), Pigino showed that Aβ peptide oligomers inhibit both anterograde and retrograde transport in the same system, an effect they attributed to Aβ’s activation of casein kinase II.

APP first came to the notice of Bearer and colleagues in their studies on the transport of herpes simplex virus (HSV) in neurons. The virus moves from cell body to synapse via kinesin-powered FAT. When the Brown researchers injected purified human HSV particles into isolated squid giant axons, they could reconstitute this transport, and found that the transported virus contained high amounts of human APP (see ARF related news story). APP has been implicated as a motor receptor in vesicle movement by the work of Lawrence Goldstein and others (see Kamal et al., 2000 and ARF related news story), leading Bearer to hypothesize a similar role for APP in virus transport.

This is where the study gets colorful. Rather than follow the movement of virus particles, which contain other proteins and lipids in addition to APP, the researchers decided to simplify the system. They replaced the virus with similarly sized fluorescent polystyrene beads to which they coupled defined peptides. This allowed them to test sequence requirements for transport. In this system, video microscopy of injected beads derivatized with a peptide corresponding to the last 15 amino acids of the C-terminal cytoplasmic tail of APP revealed a rapid, unidirectional anterograde transport. The speed of movement was consistent with FAT, and comparable to that seen for endogenous organelles or intact virus in the same system. The transport function was specific to the C-terminal peptide, because in the same axons, different color beads coupled to a peptide derived from the extracellular domain of APP, or a scrambled C-terminal sequence, displayed no motility at all (see movie below). 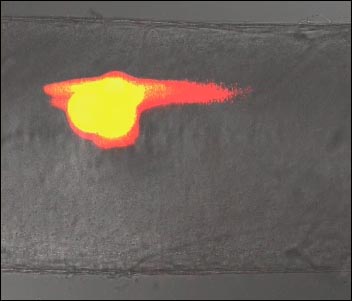 The function of APP in transport appears to be highly conserved. Cloning of squid APP revealed a nearly identical C-terminal sequence (13 out of 15 amino acid match to the human), and transport studies showed that the squid cytoplasmic domain also supported bead transport. In further support for a physiological role of APP in transport, the researchers demonstrated that the intact C99 fragment of human APP, consisting of a small luminal/extracellular stretch, plus the transmembrane and cytoplasmic domain, could mediate transport when conjugated to beads at a similar density as found on HSV. Transport of beads coupled to either C99 or the C-terminal peptide was blocked by addition of excess free peptide, suggesting that the protein was binding specifically to some part of the motor assembly.

The results support the idea that APP is involved in HSV transport in neurons, and raises the possibility that it could play a wider role in recruitment of the transport machinery for anterograde shipments in general. The domain contains an NPXY motif which participates in many protein-protein interactions, and could contact kinesin directly, as Goldstein has proposed, or via a scaffolding protein (Taru et al., 2002). Bearer and colleagues call the short peptide a “zipcode” for anterograde transport, but while the sequence is sufficient for transport, further work will be required to show if it is necessary.

Gustavo Pigino also showed data on FAT in the squid axon, where he and his colleagues are studying the effects of Aβ oligomers. Like Bearer, Brady and colleagues summer in Woods Hole, where they study axonal transport not in intact axons, but in extruded axoplasm preparations. Because they have removed the plasma membrane barrier, their system allows them to add proteins or inhibitors directly to cytosolic transport machinery, and look for effects on anterograde or retrograde transport and the motor proteins involved. Earlier this year, they showed that polyglutamine-expanded androgen receptor inhibits FAT by turning on jun N-terminal kinase, a regulator of kinesin activity (see ARF related news story).

In his talk, Pigino described similar experiments testing the effects of Aβ—soluble, oligomeric, or fibrillar. Only oligomeric Aβ inhibited transport at very low concentrations (100 nM), and it slowed movement in both anterograde and retrograde directions. Addition of active casein kinase II (CKII) mimicked the effect of Aβ, suggesting that the oligomers were causing activation of this enzyme. Consistent with these results, Aβ oligomers increased phosphorylation of the CKII substrate kinesin light chain, while addition of a CKII inhibitor along with Aβ restored transport. One attendee raised the issue of whether Aβ oligomers are present in the cytoplasm of neurons in sufficient amounts to elicit these effects in intact cells, a question which remains to be answered for both normal and AD brain.—Pat McCaffrey