A growing number of studies stress the harmful effects of tau in Alzheimer’s disease, but exactly how the protein exerts toxicity, and how it interacts with Aβ, remain open to question. At the Society for Neuroscience 42nd annual meeting, held 13-17 October in New Orleans, Louisiana, speakers offered new clues during a nanosymposium on tau and Aβ. One talk focused on extracellular tau and its role in propagating disease, while two other researchers reported mechanistic links between Aβ and tau via cell cycle proteins and proteases, respectively.

As expected, induced neurons made from people with presenilin 1 (PS1) and PS2 mutations had higher Aβ42/Aβ40 ratios compared to control cells, although they did not show a difference in total Aβ, Griswold-Prenner said. More surprising was the finding that the induced FAD neurons secreted up to twice as much extracellular tau (e-tau) as did control neurons. Although unexpected, this finding is in keeping with the high cerebrospinal fluid (CSF) tau levels seen in AD patients, Griswold-Prenner told Alzforum.

What might the extracellular tau be doing? To investigate, the researchers added conditioned medium from these cultures to mouse cortical neurons. They saw rapid uptake. This seems to occur through active transport, as the process can be influenced by temperature, Griswold-Prenner noted. Treating cultures with cytochalasin D, an inhibitor of actin polymerization, also prevented e-tau internalization, again suggesting this is an active process perhaps mediated by endocytosis. Neurons that took up e-tau showed increased neuronal depolarization and hyperexcitability. Hyperactive neurons are another hallmark of AD, although it has usually been associated with Aβ (see ARF related news story; ARF news story). 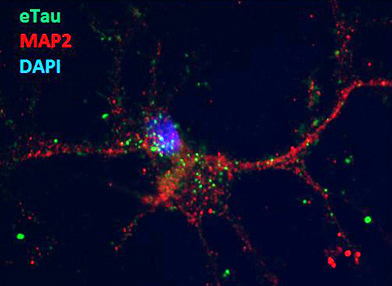 What exactly is e-tau? Griswold-Prenner reported that it consists of fragments rather than full-length protein. In response to questions from the audience, she said she is not yet certain what parts of tau are in the extracellular forms. She noted that full-length tau had no effect on excitability in her stem cell-derived neurons.

Griswold-Prenner and colleagues also looked for e-tau in CSF from familial and sporadic AD patients and healthy controls using several commercial assays. As expected, they found elevated tau in AD patients, but standard assays cannot determine whether the protein is full length or fragmented, Griswold-Prenner said. To examine this, they isolated tau from pools of CSF using antibodies and looked at size on a Western blot. At SfN, Griswold-Prenner reported that the scientists consistently see tau fragments in CSF, but cannot detect any full-length tau. She is not sure yet if these fragments are the same as the ones released by the iPSC-derived neurons. Eckhard Mandelkow at the German Center for Neurodegenerative Diseases (DZNE) in Bonn, Germany, questioned the finding of fragmented CSF tau, noting that Kaj Blennow at the University of Gothenburg in Molndal, Sweden, reports full-length tau in CSF (see Portelius et al., 2008). However, the Swedish study used mass spectrometry, which relies on proteolytic digestion, and so could not directly confirm full-size tau, Griswold-Prenner told Alzforum.

Another pressing question in the field is how tau relates to Aβ. Previous work in mice has shown that deleting tau prevents Aβ toxicity (see ARF related news story). Some studies reported that dendritic tau mediates Aβ excitotoxicity at NMDA receptors, suggesting a possible mechanism that connects the two proteins (see ARF related news story and ARF news story). Researchers led by George Bloom at the University of Virginia, Charlottesville, came to the Aβ/tau relationship from an entirely different direction. They were intrigued by work from Karl Herrup, then at Rutgers University, Piscataway, New Jersey, who showed that in AD, mature neurons attempt to re-enter the cell division cycle. These cells replicate their DNA, but then get stuck, unable to complete mitosis. After about a year, they die. Herrup and others recapitulated the effect by exposing primary cultured neurons to Aβ (see also ARF related news story). Herrup proposed that this phenomenon accounts for a large fraction of the neuronal loss in AD (ARF Webinar).

Bloom wondered what role tau might play in this process. As he described at SfN, his group first repeated Herrup’s results, treating primary neuronal cultures with either monomers or oligomers of synthetic Aβ. The latter induced DNA synthesis, as seen by the incorporation of the synthetic nucleoside bromodeoxyuridine (BrdU). Neurons from tau knockout mice, however, did not take up the nucleoside after Aβ treatment, indicating that tau is required for the cell cycle reentry effect. The researchers saw a similar phenomenon in vivo. In six-month-old hAPP J20 mice, nearly 60 percent of neurons express the cell cycle marker cyclin D1; however, when the J20s were crossed with tau knockout mice, cyclin D1 was undetectable in six-month-old offspring.

Investigating the mechanism, Bloom found that synthetic Aβ oligomers activate the kinases CaMKII, PKA, and Fyn, which each phosphorylate tau at specific sites (serine 416, 409, and tyrosine 18, respectively). Inhibiting one of these kinases, or mutating any of their target phosphorylation sites, prevented DNA replication after Aβ treatment. By contrast, inhibiting GSK-3β, a different tau kinase, did not stop this process. The results suggest that Aβ activates tau toxicity through CaMKII, PKA, and Fyn acting in parallel, with all three being essential to trigger cell cycle reentry, Bloom said. He noted that this mechanism occurs independently of any aggregation of Aβ or tau, fitting with a wealth of other data showing that the soluble forms of these proteins are the most deadly.

Other scientists are proposing different links between the two hallmark proteins of AD. For example, Samer Abdul-Hay at the Mayo Clinic, Jacksonville, Florida, reported at SfN that Aβ and tau are connected through the activity of a protease that degrades both. Abdul-Hay investigated amyloid-degrading proteases because late-onset AD is widely seen to result from the brain’s failure to clear Aβ. The aspartyl protease cathepsin D (CatD) has been genetically linked to AD, suggesting it might play a role in some cases (see ARF related news story), but the association is weak.

Abdul-Hay found that total insoluble (but not soluble) Aβ levels in the brains of CatD homozygous knockout mice rise until the animals die at about four weeks old. Amyloid accumulation topped that seen in knockouts of other amyloid-degrading enzymes, such as neprilysin or insulin-degrading enzyme, suggesting that CatD plays a more central role in degrading amyloid, Abdul-Hay said. Looking at the dynamics, Abdul-Hay found that CatD degrades Aβ40 most efficiently. In contrast, though Aβ42 binds the enzyme strongly, it also disengages slowly, making for slower proteolysis and for competitive inhibition of the protease. This means that the presence of high levels of Aβ42 can bog down CatD, allowing more amyloid to accumulate, he suggested. To further test CatD’s role, the researchers crossed CatD heterozygotes with Tg2576 mice, which carry mutant human APP. The offspring, who live to about six months, developed early, robust, intra- and extracellular amyloid pathology and huge amyloid plaques (50-80 microns in diameter) compared to their Tg2576 parents.

Abdul-Hay wondered if CatD downregulates tau as well. He used RTg4510 mice, which express human mutant tau under an inducible promoter, and introduced a viral construct to overexpress or downregulate the cathepsin. Overexpression chewed up tau, whereas inhibiting the protease slowed tau breakdown and increased its hyperphosphorylation. In toto, Abdul-Hay claimed that cathepsin D links Aβ and tau pathology indirectly, in that Aβ42 shuts down CatD activity, thus pumping up tau levels.—Madolyn Bowman Rogers.