Picture this: Your husband gets fired from his college professorship. He had written his students’ final essays himself and graded his work as theirs; they turned him in. Soon after, he buys a sports car he can ill afford and you beg his neurologist to get the dealer to take it back. Or this: Seized with chest pain, you drop onto the floor and urge your spouse to call 911. Unmoved, he replies, “Oh. What’s for dinner?” Such vignettes of executive and emotional dysfunction hint at why frontotemporal degeneration is a crushing disease, particularly for caregivers. They also animated a meeting that the FTD Treatment Study Group (FTSG) convened 4 June in Washington, D.C., where FTD clinician-researchers from North America and Europe met with experts from regulatory agencies, industry, family representatives, and public and private funders.

The questions of the day were, Given the explosive progress science has made in the past six years on the genetics and molecular pathology of this spectrum of dementing disorders, how close is the field today to running therapeutic trials that stand to be successful? If the field is not there yet, what is still missing? And what do scientists still have to do to attract the interest, funds, and expertise of the biotech and pharmaceutical industry?

Hosted jointly by the Association for Frontotemporal Degeneration (AFTD) and the National Institute of Neurologic Disorders and Stroke, the workshop drew 67 scientists from academia, industry, the U.S. Food and Drug Administration (FDA), and public and private funding organizations. It was the third major gathering of the FTSG since 2010, when the group started formalizing its work (see AFTD Web page). Previous meetings have laid out the general case for starting trials in these diseases, focusing specifically on preclinical studies (see ARF related news story) and clinical research (see ARF related news story).

In D.C., the academic scientists tried to persuade industry and regulators that they have largely put in place the pieces necessary to conduct therapeutic trials for these diseases. These pieces are the patients, the diagnosis, the molecular pathology, biomarkers, outcome measures. What, the researchers asked, do they now need to do to run trials that can take advantage of FTD’s orphan disease status and of the FDA’s existing mechanism of accelerated, aka conditional, approval? What advice can the agency offer to put clinical trials on a rational path early on?

“The goal for our meeting is to make a punch list of what needs to be done in the next year to accomplish successful FTD trials of disease-modifying agents,” said Adam Boxer of the University of California, San Francisco, who co-organized the day. To the industry scientists in the room, Boxer, who leads the FTSG, issued this challenge: “You should be developing drugs for this indication. You should be devoting significant resources. If that is not your opinion after today, we want to know what we need to do to convince you.”

By the end of a long day of talks and discussion, the scientists heard expressions of support from both regulators and industry for what they are trying to do. “You have impressed me tremendously. We are really interested in partnering with you,” said Lynne Yao of the orphan group with FDA’s Center for Drug Evaluation and Research. “This is a heroic effort,” said Michael Grundman of Global R&D Partners in San Diego, California. But at the same time, industry and regulatory scientists, speaking to the group and privately, made clear that the field still has to fill some gaps before pharma will jump in with its most promising drugs or the FDA will open the door to accelerated approval. The gaps include prodromal and drug response biomarkers, stronger consensus on outcome measures that can reliably pick up a drug effect amid the marked clinical heterogeneity of these diseases, and even fundamental questions of pathophysiology. “This is a wide-open, very young field,” commented one industry scientist. (This article does not name industry scientists to protect their ability to speak frankly at these meetings.)

Some of the answers will come from expanding ongoing natural history studies and from building international registries, particularly in genetic cohorts that follow presymptomatic cases over many years. Much as the Dominantly Inherited Alzheimer Network (DIAN; ARF related news story), the Alzheimer's Prevention Initiative (API; ARF news story), and the Alzheimer’s Disease Neuroimaging Initiative (ADNI) are doing for Alzheimer’s disease, and TRACK-HD is doing for Huntington’s (Stout et al. 2012), FTD registry studies could establish markers for disease progression and characterize the earliest features of FTD. Such studies can track how candidate fluid markers and imaging modalities change during the prodrome and symptomatic phase of disease, pinpoint when in life these various markers start changing, and clarify the relationship between important pathophysiologic proteins, for example, progranulin and TDP-43.

In particular, Lynne Yao from the Food and Drug Administration’s orphan drug group recommended that all stakeholders jointly fund an FTD registry study in support of all subsequent clinical trials, letting a patient organization manage it. “Drug development moves faster when patient-led organizations jointly push for a shared registry study that multiple sponsors can tap. Cystic fibrosis is an example where this is working,” said Yao.

Some of this is already underway. Howard Rosen of UCSF runs the Neuroimaging in Frontotemporal Dementia (NIFD) study on FTD and primary progressive aphasia (PPA); Boxer runs the 4 Repeat Tauopathy Neuroimaging Initiative (4RTNI) (4RTNI) on progressive supranuclear palsy (PSP) and corticobasal degeneration (CBD); both are longitudinal and multicenter. A registry and biomarker study of genetic families and their asymptomatic carriers has been afoot in Europe for six months, with Martin Rossor and Jonathan Rohrer of University College London (UCL) at the helm, and government funds coming from the United Kingdom Medical Research Council and partners in other host countries. Called the GENetic FTD Initiative, or GenFi, it currently engages 13 centers in the UK, Canada, Italy, the Netherlands, and Sweden, with many more interested in joining, according to Jason Warren of UCL. “We … target recruitment of 30 subjects per centre, comprising 10 presymptomatic carriers, 10 mutation-negative family members, 10 affecteds. I believe this is the first consortium of its kind in genetic FTD and we are very excited about it,” Warren wrote to Alzforum in an e-mail. GenFi recruits across the spectrum of autosomal-dominant FTD, but targets the major genes MAPT (tau), PGRN (progranulin), and now C9ORF72. A genetic registry study is being planned in the U.S. While long and expensive, such cohort studies provide the foundation for drug development. “We spend a lot of time in my shop getting the natural history foundation for rare diseases. Once that is in place, the rest flows better,” Yao told the scientists.

What about clinical outcome measures, another key ingredient for successful therapy trials? They exist, but scientists agreed they need refining, ideally via a collaborative effort in the coming year. “Each of the measures needs work with the goal that we can achieve some consensus, hoping that, by the time trials start, we agree to design trials using similar outcome measures without going off in 10 directions at once,” said Howard Feldman of the University of British Columbia, Vancouver, Canada. On one candidate, magnetic resonance imaging (MRI), research across several independent longitudinal studies is beginning to produce convergent data by which atrophy corresponds to clinical function and tracks with disease progression. The brain also shrinks more rapidly with FTD than with AD. This was seen as a significant advance by academic and industry leaders alike, and suggests that MRI volumetry can cut down on the number of patients needed for clinical trials. At the same time, MRI volumetry for FTD is not fully standardized for multicenter trials. Other MRI modalities that show promise in FTD research, such as network connectivity imaging, remain experimental. 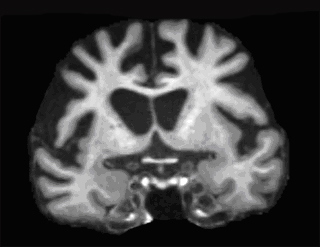 Fluid biomarkers for positive identification of FTLD are more limited, said Feldman. CSF tau in particular has proven obstreperous in FTLD. With current assays, this marker increases progressively in prodromal and frank AD, but curiously not in FTD, not even in "pure" tauopathies such as progressive supranuclear palsy or the genetic form, frontotemporal degeneration with parkinsonism-17 (FTDP-17).

The most definitive blood-based markers in FTLD are the genetic ones, for example, progranulin or, more recently, C9ORF72, both of which are linked to TDP-43 pathology. They allow researchers to identify the molecular pathogenesis underlying a given patient’s clinical disease. Deterministic gene mutations account for a larger fraction of FTD than do APP and the presenilin genes in AD; they may supply enough patients to power small trials, especially if several specialized sites band together. The monkey wrench for this scenario is, at present, that people with progranulin mutations can develop different phenotypic disease. Scientists still need to work out how these can all be aggregated into a single therapeutic trial using a single outcome measure. In essence, fluid markers at present seem able to sort populations for inclusion, whereas MRI and cognition/function might serve to measure drug effects (for more on imaging and fluid markers, see Part 2).

As is usually the case in planning meetings on pre-competitive issues, where multiple pharma or biotech companies are in one room, discussions steered carefully clear of candidate drugs. Representatives from 14 companies were present, but none mentioned even drug classes, much less individual "assets." This is as close as things came to naming anything: In response to a plaintive audience quip at the end of a long day, “Where are the drugs? Were they discussed while I was in the bathroom?” Boxer allowed this much: “Most companies in this space work on monoclonal antibodies against tau. I would like to see those go into progressive supranuclear palsy or an FTD indication before they go into AD.”

Frontotemporal degeneration has gained both prominence and financial support in recent years. The New York Sunday Times in May 2012 ran a front page feature in its Vanishing Mind series. Years earlier, the tauopathy progressive supranuclear palsy (PSP) penetrated public consciousness when the entertainer Dudley Moore spoke openly about coping with PSP in interviews with Barbara Walters and others.

Private funds for therapy efforts on the progranulin forms of FTLD have come from an affected family through the Bluefield Project. “We are looking for the best and brightest ideas to invest in this field while insisting on a highly collaborative environment,” Roy Richards, who co-sponsored the D.C. meeting, told the audience. Similarly, research on the tau side of FTLD has been boosted by the Consortium to Study Tauopathies at UCSF. Separately, the Tau Consortium is an initiative by the investment billionaire Richard Rainwater, who has PSP. Besides supporting this meeting, this consortium also funds the development of new research models, including iPS cell lines derived from cells donated by Rainwater. The meeting host, the Association for Frontotemporal Degeneration itself, included an RFA form in the conference materials as well. For more on this conference, see Part 2 of this series.—Gabrielle Strobel.