Spinal cord injury creates a rift that has proven extremely difficult to bridge—once the spine is severed or crushed, the neurons on either side remain forever divided. But perhaps there are ways to close the gap, researchers reported at the Society for Neuroscience annual meeting, held in San Diego, California, 13-17 November 2010. They agreed it will likely take a combination of approaches to truly repair spinal injuries.

Several researchers reported that they boosted axon regeneration in rodents by tapping a neural fountain of youth. In a nanosymposium, Kai Liu of Children’s Hospital in Boston, Massachusetts, presented one way to rejuvenate neurons. Liu and colleagues targeted mTOR, which promotes growth in developing rodents. Enhancing mTOR activity in injured adults led to axon regeneration that impressed several scientists in attendance. “The magnitude of the effect is quite large” in terms of how many axons sprouted beyond the lesion, commented Stephen Strittmatter of the Yale University Medical School in New Haven, Connecticut. Other researchers adopted different approaches (see Part 2 of this series). Ryan Williams and Mary Bunge, of the University of Miami Miller School of Medicine in Florida, described how they rejuvenated adult neurons by promoting other genes that are active early in development. In a poster presentation, Paul Lu and Mark Tuszynski, both of the University of California in San Diego, discussed their use of embryonic neuron grafts to repair spinal cord lesions. Finally, Martin Oudega of the University of Pittsburgh presented work performed mainly in the laboratory of his collaborator Barbara Grimpe at Heinrich Heine University in Düsseldorf, Germany. Grimpe and colleagues used an RNA knockdown technique to prevent the formation of scar tissue that normally inhibits regeneration.

The new approaches at SfN are a step forward, but progress in spinal cord repair continues to be slow. As Bunge put it in an interview with ARF: “The rats were not climbing out of the cage.”

No PTEN, No Problem
Liu worked with joint first author Yi Lu and senior author Zhigang He, also at Children’s Hospital. The trick, Liu said, is to knock out phosphatase and tensin homolog (PTEN), a negative regulator of mTOR. With mTOR’s cell growth-promoting activity enhanced in mice, Liu showed, neurons grew right up to the edge of injury and several leapt the fissure to the other side. Once there, they appeared to form pre-synaptic boutons, although the researchers do not know if it is possible to regenerate fully functional synapses. Liu’s presentation covered work published in Nature Neuroscience in September (see Liu et al., 2010).

Collaborator Oswald Steward of the University of California in Irvine has been studying regeneration since 1974. “The corticospinal tract has always been thought of as the most resistant to treatments,” he told ARF in an interview. “Nothing like this has ever been seen,” he said of the findings.

In an e-mail to ARF, Liu added: “Reproducible regeneration of ascending sensory tract, bulbospinal, and propriospinal tracts after spinal cord injury have been shown previously, but not in the corticospinal tract…. The kind of regeneration seen before was still quite limited and often required a combination of strategies.”

Two years ago, the He lab published a paper on PTEN deletion and regeneration of optical nerves (Park et al., 2008). Optical nerves are a convenient system for study, Liu told ARF, but what scientists really want is to repair damaged spinal nerves.

Expression of mTOR decreases gradually with age, Liu said, and with it drops the body’s ability to regenerate nerves. “The drive is gone, the pathway is silent,” he said. But PTEN deletion could offer a way to artificially amplify the regeneration pathway in adults.

The researchers used mice with floxed PTEN and AAV-Cre injections in the motor cortex to obliterate the PTEN gene in neonatal mice. Then, in six-week-old animals, they tried two injury models: dorsal hemisection and complete crush. In the hemisection, the researchers sliced apart the dorsal part of the spinal column but left the ventral portion intact, creating a cleft. For crush injury, they compressed one part of the spinal column. The severe crush injury is more clinically relevant, Steward said, because the spinal cord bruising that it mimics is more common than a hemisection. The researchers injected the tracer biotinylated dextran amine (BDA) into the sensorimotor cortex to stain uninjured axons upstream of the injury. Any BDA-labeled fibers downstream of the injury would indicate the axons crossed the damaged site.

Normally, axons retract from an injury, and growing axons halt before they come right up to a lesion. In nine control animals, which had an intact PTEN gene, the researchers observed no axons crossing the lesion eight weeks after injury. In two other control mice, only a couple of axons reached across the divide. But in all 11 PTEN-knockout mice, Liu and colleagues saw many axons on the far side of the lesion. “This is a dramatic proximal sprouting,” Liu said during his presentation. Some axons traversed the lesion directly, while others crossed via the intact ventral spinal cord. This is exciting, Bunge told ARF, because most axon regeneration protocols only lead to axons crossing the intact tissue, not the gap. Axons grew an average of one millimeter beyond the lesion.

The researchers sought confirmation, recruiting Jae Lee in the laboratory of Binhai Zheng at the University of California in San Diego to repeat the hemisection experiments. Lee also saw axons traveling across and beyond the injury.

Back in Boston, Liu also tested his theory in the crush injury model. In eight control animals, not a single axon bridged the divide, 12 weeks after injury. “I have never seen any single corticospinal tract axon ever grow across the lesion” in control animals, Liu told the audience. But in eight PTEN knockouts, he saw plenty of lesion-crossing (see image below). 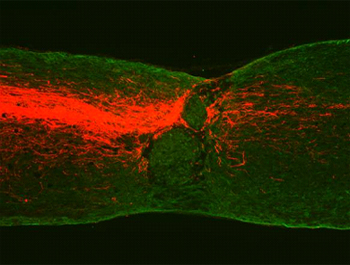 Since mTOR expression declines with age, the researchers checked if regeneration was possible in older animals. In mice that lost PTEN after birth, but did not suffer injury until five months of age, axons still regenerated. In another experiment, the researchers waited until the mice were four weeks old to inject the AAV-Cre. Although the PTEN deletion was less efficient, they nevertheless observed some regeneration.

“The discovery of the PTEN pathway as a powerful controller of CNS axon regeneration is a landmark advance,” wrote Ben Barres of Stanford University in Palo Alto, California, in an e-mail to ARF. “Now, the big question is whether the regenerated axons will reform their specific synaptic connections and restore neurological function.”

The He lab researchers collaborated with Steward to examine their animals for any indication of synapse formation. When they stained sections for the pre-synaptic marker vGlut1, they saw it along axons and in the bouton-like axon tips, a promising sign. Further, in electron micrographs, the scientists observed that the axons had contact zones holding pre-synaptic vesicles as well as nearby post-synaptic densities. However, the researchers are still working to discover if these synapse-like structures can actually transmit action potentials. Strittmatter said he would really like to see some evidence of recovery in the injured animals. Liu told ARF those experiments are ongoing, but it is too early to form any conclusions.

Another possible explanation is that the neurons, having grown up without PTEN, were more likely to regenerate, Tuszynski suggested in an e-mail to ARF. He wondered, “Could this be resistance to injury, instead of enhanced regeneration?”

Having shown regeneration in both optic and corticospinal nerves, the authors suspect it will work in other systems. “It is highly likely that [Liu and Lu] have found a core mechanism of axonal regeneration,” Steward said.

There are many future challenges in converting these results into a therapy. For one, the researchers noticed that growing axons avoided areas occupied by macrophages and fibroblasts. They appeared to prefer growing alongside an unidentified cell population expressing glial fibrillary acidic protein (GFAP), a common marker for astrocytes. Macrophages seem to cause axons to retract in control animals, Liu said: “I believe that if you had a way to eliminate the macrophages, likely you may increase axonal growth.” In addition to Liu’s evidence that axons grow along GFAP-positive cells, Bunge told ARF she has observed a role for astrocytes in regeneration as well.

Another challenge, Steward noted, is to find a therapy that would work several months post-injury, which would be more applicable in a clinic. Doctors would also need a way to activate mTOR without genetic engineering. The researchers have tested a few PTEN inhibitors in vitro, Liu told the audience, but thus far found none that support regeneration. RNA interference is also a possibility, Steward said.

Liu told ARF he hopes the research in He’s lab will entice more researchers to study the topic. “It has been a sort of dark ages in the regeneration field,” he said, but he thinks the new results herald a renaissance.

What does any of this mean for neurodegeneration? Steward thinks it is likely the PTEN pathway could help there, too. “What you’re doing is essentially rejuvenating the neuron,” he said. “I cannot imagine that would not contribute to maintenance of a sick cell.” Already, researchers have found that siRNA for PTEN boosted motor neuron numbers in a mouse model of spinal muscular atrophy (Ning et al., 2010).—Amber Dance