Apolipoprotein E is the strongest genetic risk factor for late-onset Alzheimer’s disease, accounting for more than 95 percent of cases. But despite decades of research, it is still not clear how it ties in with AD etiology. At the Society for Neuroscience annual meeting held 13-17 November 2010 in San Diego, California, scientists presented their latest work using cutting-edge microscopy and new in-vitro methods to study ApoE-Aβ interactions, and their untoward effects, at human brain synapses. Postmortem studies of human brain tissue point to a scenario where ApoE, especially the E4 isoform, promotes Aβ oligomerization and targets Aβ oligomers to synapses. The study was “one of the most impressive presentations at SFN this year,” wrote Taisuke Tomita of the University of Tokyo in an e-mail to ARF. “The work is elegantly conducted, and suggests ApoE may have a ‘cargo receptor’-like function in Aβ-induced synaptic toxicity.” Moreover, other SfN data suggest that blocking the ApoE-Aβ interaction could help stem Aβ-induced synaptic toxicity, and efforts are underway to develop compounds to do just that. These agents have a way to go before entering the clinic, though, and scientists have much to learn about the mechanisms by which ApoE influences Aβ oligomerization and localization to synapses.

Conceptually, an ApoE-Aβ connection in AD has long seemed reasonable. ApoE is a lipid transport protein, and brain areas involved in learning and memory, which show heavy amyloid deposition in AD, also express abundant receptors for ApoE and other lipoproteins. ApoE has been shown to bind Aβ (e.g., Strittmatter et al., 1993 and others) and to promote its degradation (Jiang et al., 2008 and ARF related news story) and clearance (Deane et al., 2008) from the brain. Meanwhile, work by several groups solidified claims that Aβ oligomers are neurotoxic in vivo (see Shankar et al., 2008 and ARF related news story; McDonald et al., 2010 and ARF related news story). Robert Koffie, an M.D.-Ph.D. student in Tara Spires-Jones’s lab, in collaboration with Brad Hyman, at Massachusetts General Hospital, Charlestown, showed that Aβ oligomers shrink dendritic spines in the brains of APP/PS1 transgenic mice (Koffie et al., 2009 and ARF related news story). To achieve the high resolution needed to view individual synapses, the researchers used array tomography microscopy, which generates 3D images from stacks of 70 nanometer-thin tissue sections. The researchers stained these for pre-synaptic (synapsin 1) and post-synaptic (PSD95) markers, and with an antibody for oligomeric Aβ (NAB61) generated in the lab of coauthor Virginia Lee at the University of Pennsylvania, Philadelphia.

As shown on their SfN poster, Koffie and colleagues now extend this analysis to human AD brain tissue. In so doing, they focused on how ApoE might contribute to synapse loss induced by Aβ oligomers. They used array tomography to analyze postmortem tissue freshly isolated from 10 AD patients and five age-matched controls. All controls were ApoE3/3, and the AD group included three E4/4, four E3/4, and three E3/3 patients. As with the AD transgenic mice, oligomeric Aβ localized to synapses in both AD and control brains—even those without plaque pathology. Previous biochemical studies detected oligomeric Aβ in brain tissue from normal controls with plaque pathology (see McDonald et al., 2010), while using an antibody (A11) specific for prefibrillar oligomers, Charles Glabe and colleagues at the University of California, Irvine, detected prefibrillar oligomers in extracts from brains with little or no plaque pathology (see Tomic et al., 2009). “I am excited by the idea that oligomeric Aβ in the normal brain may play a role in LTD, but evidence is circumstantial so far,” Spires-Jones told ARF.

The researchers found that the oligomeric Aβ-positive synapses were abnormally small, and synapse loss around plaques correlated strongly with oligomeric Aβ burden. They showed that in the AD group, E4/4 brains had more synapse loss than did E3/3 brains, and that ApoE co-localized with synaptic Aβ oligomers more frequently in the E4/4 samples (see image below). ApoE was detected with the WU-E4 antibody developed in the lab of coauthor David Holtzman at Washington University School of Medicine, St. Louis, Missouri. Tomita did mention one concern about the findings. “Anti-Aβ oligomer antibodies sometimes show cross-reaction with several proteins, and synaptic terminals contain many proteins,” he wrote. 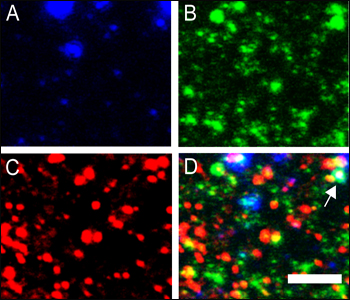 In biochemical studies of the postmortem brain extracts, the team found that E4/4 AD patients had higher levels of Aβ oligomers, largely dimers and trimers, compared with E3/3 AD or control groups. To further address these isoform differences, the researchers cultured neurons with lipidated ApoE3 or ApoE4 particles, and with Aβ oligomers isolated from conditioned media of Tg2576 primary neuronal cultures. Immunostaining showed that, while both ApoE3 and ApoE4 co-localize to synapses, only the E4 associated with Aβ oligomers and enhanced their synaptic localization.

Taken together, the data suggest that ApoE4, more than other ApoE isoforms “causes oligomeric Aβ to form, and targets it to synapses, which then shrink and die,” Spires-Jones told ARF. That jibes with previous work of other groups showing that ApoE4 forms complexes with Aβ in vitro more quickly than ApoE3 or ApoE2 (e.g., Strittmatter et al., 1993; Sanan et al., 1994). Several studies (e.g., LaDu et al., 1994; Tokuda et al., 2000) have suggested the opposite, but that is probably due to differences in the lipidation status of ApoE used in the studies, Koffie said. Some studies are trying to address this very issue. On a poster, Philip Verghese and coworkers in the Holtzman lab presented in-vitro data suggesting that formation of ApoE/Aβ complexes depends critically on ApoE lipidation status, and on neuronal plasma membrane receptors.

In the meantime, array tomography looks to be a powerful tool for detailed postmortem studies of ApoE and Aβ oligomers at synapses. Stephen Smith and coworkers at Stanford University, Palo Alto, California, developed the technique (see ARF Enabling Technologies report; Micheva and Smith, 2007) and helped Spires-Jones’s team adapt it for their studies in AD transgenic mice (Koffie et al., 2009). Smith’s lab is now pushing the technological limits, increasing the numbers of markers that can be analyzed per specimen. As reported in the November 18 issue of Neuron (Micheva et al., 2010), first author Kristina Micheva and colleagues used the technique to examine single synapses in mouse neurons stained with 17 different antibodies. Their analysis allowed sub-classification of excitatory synapses into four groups. For their study, Spires-Jones and colleagues lumped all excitatory synapses into one group; however, in most neurodegenerative disorders, “you don’t lose all the synapses at once,” Smith said. “You lose some and gain others. The basis for that differential susceptibility is almost certainly a hallmark of AD and potentially of all other neurodegenerative disorders.” In future studies, Koffie said, array tomography can “explore additional synaptic markers and ask whether specific subsets of synapses are being affected in AD.”—Esther Landhuis