Several proteins linked to amyotrophic lateral sclerosis and frontotemporal dementia show up in stress granules. These natural RNA-protein accumulations protect essential RNAs in times of cellular strife, but cause trouble if they fail to dissipate when the good times return. Stress granules have become a major theme in the study of ALS and related disorders, Robert Brown of the University of Massachusetts Medical School in Worcester noted when he gave the opening address at “RNA Metabolism in Neurological Disease,” a symposium held November 7–8 in San Diego. Researchers have observed disease-associated mutants of TDP-43, FUS, hnRNPA1, hnRNPA2, and ataxin-2 all mired in pathological stress granules. Unexpectedly, Aaron Gitler and Matthew Figley of Stanford University in Palo Alto, California, added another ALS gene to the list: profilin-1, an actin-binding protein. Profilin-1 associates with stress granules in yeast and in mammal cell lines, they reported.

Gitler said he has come to think of stress granules as “crucibles of ALS pathogenesis” because their failure to disassemble may promote neurodegeneration (see Li et al., 2013 and reviewed in Wolozin, 2012). He and Figley offered their results in an oral presentation and poster, respectively.

They did not expect to find themselves studying stress granules when they followed up on the identification of profilin-1 as an ALS gene. ALS-linked profilin-1 mutations occur in the protein’s actin-binding domain, leading researchers to suspect that defects in actin filament assembly or axon outgrowth predispose to the disease, but the mechanism remains a mystery. To get a handle on it, Figley, who works in Gitler’s lab, studied the yeast version of profilin-1, PFY1, which also interacts with actin.

Yeasts that lack PFY1 or express a mutated variant grow at 30 degrees Celsius, but, unlike wild-type yeast, they are inviable at 37 degrees. Adding the human profilin-1 gene allowed the cells to tolerate the higher temperature, reported Figley. He reasoned that he could use the yeast system to assess the functionality of various human profilin-1 variants. The cysteine-71-glycine and methionine-114-threonine substitutions, for example, failed to rescue the deletion strain, whereas the glutamate-117-glycine mutation did, indicating that the first two mutations are fully inactive while E117G might retain some function. This lines up neatly with human results. People with the E117G substitution have no sign of disease, leading scientists to suspect it creates a less severe defect than the C71G and M114T mutations, which turned up only in ALS cases in the original study (see Jul 2012 news story).

To understand profilin’s natural role in yeast, Figley created a set of strains with mutations in PFY1 plus one other gene—for a total of 4,800 crosses—and looked for double mutants that failed to grow. The screen identified three categories of genes that interact with PFY1. One comprised those involved in actin and actin-related cellular activities—no great surprise there. Another consisted of genes related to dynactin, which helps drive intracellular transport. This was interesting, Gitler said, because profilin-1 had no prior link to dynactin. The multipart dynactin complex helps dynein tote cellular cargo along microtubules, and mutations in dynactin components have been linked to motor neuron disease (see Münch et al., 2004; Münch et al., 2005). What was surprising to Gitler and Figley was the third, noncytoskeleton category of genes. About 10 percent of the hits related to stress granules or P-bodies, which are similar mRNA aggregates. Might profilin-1 be important for stress granule formation? To test this hypothesis, Figley stressed various cell types and looked for profilin-1 in the RNA foci.

The researchers treated HeLa cervical cancer cultures with arsenite or dithiothreitol, and observed that profilin-1 co-localized with ataxin-2 and Hu protein R, another stress granule marker. Treatment with cyclohexamide, which prevents RNA from forming into stress granules, prevented the profilin-1 foci (see image below). The same pattern occurred in the human osteosarcoma line U2OS, and in primary mouse cortical neurons. A heat shock also redistributed profilin-1 to RNA foci in the primary neural line. Gitler and Figley concluded that the profilin-1 foci were likely to be stress granules. 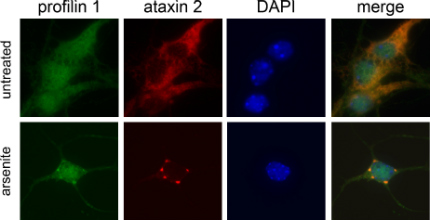 Ben Wolozin of Boston University said that in hindsight, he did not find it so surprising that profilin-1 might participate in stress-granule formation. When those structures form, they must rely on the cytoskeleton to deliver components; similarly, the cytoskeleton must pull the granules apart when the RNAs are needed again, he reasoned. He speculated that profilin-1 loss-of-function mutants might be unable to disassemble stress granules, causing long-lasting, pathological granules to accumulate.