The 9th International AD/PD conference, held in Prague 11-15 March, made a big splash in the otherwise sleepy backwater of Alzheimer disease history. In the opening session of the meeting, Pavel Kalvach of the Charles University of Prague jolted jetlagged attendees with the news that his very city had hosted a contemporary of Alois Alzheimer’s who had described his rival’s eponymous disease in more depth than did Alzheimer himself. That seminal investigator was Oskar Fischer, and his story resonates with historical pain. Fischer’s contributions were widely noted and debated when he published them in 1907, 1910, and 1912, and for some years afterward. But they later became neglected as Fischer’s career crumbled amid nationalist tension and the anti-Semitism of his time. His life ended tragically in 1942 in Terezin (Theresienstadt), a concentration camp set up in a garrison town near Prague. This camp is especially known for having incarcerated noted artists, writers, musicians, scientists, and other scholars, whose cultural achievements in the camp the Nazis successfully touted as part of their propaganda campaign to hide the true horror of the camps, deceiving even the Red Cross on an invited visit in 1944.

Fischer remained consigned to oblivion, both in his home country and by most in the worldwide dementia community, until the fall of 2008, when Michel Goedert of the MRC laboratory of Molecular Biology in Cambridge, U.K., recounted in the journal Brain the story of what his visit to the Archives of Charles University, as well as conversations with Fischer’s descendants and present-day Czech researchers, brought to light. Freely available for download, Goedert’s paper makes for gripping reading about the historical context of Fischer’s life and also about how his observations intersect with those of other investigators at the time (Goedert, 2008).

“We are grateful to Goedert for this discovery. This country had completely forgotten Oskar Fischer,” Kalvach told the audience.

“News” to many, however, is rarely news to all. In Prague, conversation with other scientists turned up that Piet Eikelenboom, for one, wrote three years ago that Fischer’s three papers contain prescient conceptual insight into the role of inflammation in AD that found confirmation with the advent of new molecular techniques starting some 70 years later (Eikelenboom et al., 2006). A few other AD scientists have mentioned Fischer, as well, and even showed some of his drawings at talks at AD/PD (e.g., Gouras et al., 2005). At the conference, Kalvach brought Fischer’s story to a wide audience as part of his broader account on the early history of dementia research in Prague. Below are selected highlights.

Before Fischer
The early roots of psychiatry in the region of Bohemia reach back to the fifteenth century, Kalvach said. More detailed records exist of a “Tollhaus” (insane asylum) around the turn of the eighteenth century. Josef Riedel was the pre-eminent psychiatrist at the time, who established this field as an independent branch of academic medicine. His writings show that most patients received a diagnosis of “unknown,” and few lived long enough to provide much fodder for observation of age-related dementia. The region’s first magnum opus of psychiatric literature was a textbook by Karel Kuffner (1858-1940), written first in Czech and then translated to German. Kuffner focused on dementias, and debated Emil Kraepelin’s contemporaneous attempt to unify the different “Verbloedungsprocesse” (dementing processes) under a common designation, said Kalvach. All this predated the advent of neurology.

Yet another major figure in psychiatry also lived in Prague. Arnold Pick (1851-1924) is known today for his description of frontotemporal dementia and Pick’s disease. Pick published in English journals and attracted international specialists to Prague. (Curiously, Alzheimer discovered what was later called the Pick body, whereas Fischer, who worked under Pick for 16 years and pursued prolific interests, described no cases of FTD at all.) Pick headed Prague’s “Irrenanstalt” and the department of psychiatry at Prague’s German University (the city also had a Czech University), where Fischer was first assistant professor, then associate professor.

Fischer’s Time
Oskar Fischer was born into a German-speaking family in the town of Slany in Central Bohemia, some 16 miles northwest of Prague, in 1876. At age 24, he obtained a medical degree from the University of Prague, where he made seminal observations on dementia in his early thirties. The university had been divided into separate German and Czech institutions in the course of Czech nationalism against the Austro-Hungarian Empire, which ruled what today is the Czech Republic until the end of World War 1. Under Pick or his successors, Fischer never obtained tenure at this university. After 17 years of research and many more of teaching, the university revoked Fischer’s appointment in January 1939, two months before the German invasion. As in Vienna, medical institutions quietly sympathetic with national socialist rule in Germany were preparing for the anticipated takeover by removing Jewish faculty, and inconvenient minds in general. According to Goedert’s paper, the German occupants also confiscated a sanatorium for the mentally ill that Fischer had co-founded in 1908 and led since then. Fischer continued a private practice until the Gestapo arrested him in 1941.

In 1907, the same year that Alois Alzheimer published his famous paper about the pathology and clinical course of Auguste Deter’s presenile dementia (see ARF Centennial news story), Oskar Fischer reported neuritic plaques in 12 of 16 cases of senile dementia in the journal Monatsschrift fuer Psychiatrie and Neurologie, published by Karger. Alzheimer’s short paper was essentially a transcript of a lecture he had given the previous November in Tuebingen, Germany. Its undisputed achievement was the simultaneous description of both plaques and tangles in a clinically well-documented case of what would now be called early onset AD. Fischer’s first paper complements Alzheimer’s contribution by describing in great detail neuritic plaques and how they distort and push away nearby nerve fibers. Beyond that, it offers a detailed comparison of the 16 brains with dementia to 10 controls, 10 cases with psychosis, and 45 more with neurosyphilis, a predominant problem of neurology in these pre-antibiotic days.

Emil Redlich, a contemporary of Fischer’s in Vienna, had first used the term “plaque” in his publications, but he thought they resulted from proliferating glia. Fischer in his 1907 paper wrote, “Many circumstances contest this view.” Rather, he viewed the plaques as necrotic inclusions associated with abnormal neurites containing “neurofibrils.” Clinically, he called those 12 cases “presbyophrenia,” a type of dementia marked by confabulations, disorientation, memory impairment, hyperactivity, and elevated mood. This term remained in use until about 1930 but then faded when dementia was redefined. The perception of Fischer’s clinico-pathological work was tied to this term, explaining in part why his work could have been ignored later on.

In his 1910 paper, Fischer reported his study of 275 brains of people with various conditions, many of them older than 50 years. Fifty-six cases from among this old cohort had plaques, some had tangles, and the majority fit his clinical criteria of presbyophrenia. In an uncanny expression of a debate that continues to this day, he noticed that some cases showed plaque pathology but no or only mild clinical symptoms. Fischer speculated that, had these people lived longer, they would have developed the full clinical disease and more abundant pathology. But “he was aware of the fact that the frequent occurrence of abundant plaques in old people without mental impairment could fatally undermine his view that the plaque represents the morphological substrate of presbyophrenic dementia,” Goedert writes. By 1912, Fischer reported having found plaques in two cases of 35 normal old people, and he considered these people to have had presymptomatic disease. This issue is undergoing a direct test only today, as longitudinal studies track live amyloid imaging in cognitively normal elderly people.

But even in these early years, Fischer and his contemporaries already debated whether plaques occur with normal aging or are pathological. “Fischer was remarkably modern,” writes Goedert. “He separated dementia from normal aging and considered clinical signs not to be decisive by themselves for diagnosis.” Instead, he saw plaque pathology as the defining criterion.

“Fischer’s originality was enormous,” Kalvach said in Prague. Fischer was the first to describe cerebral amyloid angiopathy, or CAA. He classified eight stages of plaque development, of which stage six described plaque deposits around the walls of blood vessels. He did not foresee a connection between vascular amyloid and hemorrhages, though, Goedert noted.

Fischer placed plaque formation in the larger context of inflammation, foreshadowing a concept that would later be validated but which he lacked tools to pursue experimentally. In 1910, Fischer wrote that plaques form as the result of an extracellular deposition of an abnormal substance in the cortex that induces a local inflammatory reaction, followed by an attempted but doomed regenerative response of the surrounding nerve fibers. In their 2006 review on neuroinflammation in AD, Eikelenboom and colleagues at University of Amsterdam and Vrije University Medical Center, also in that city, recount how Fischer unsuccessfully searched plaques for cellular evidence of inflammation and for complement activation. Microglia were barely understood at the time, and Fischer’s idea remained obscure until the 1980s, when the advent of monoclonal antibodies for immunohistochemistry revived interest in neuroinflammation.

At that time, Eikelenboom detected the early complement proteins C1q, C3, and C4 in senile plaques (Eikelenboom and Stam, 1982) and later showed that they reflected complement activation. Other labs, including Pat McGeer’s, Joe Roger’s, and Annemieke Rozemuller’s, continued this line of research, reporting full-bore complement activation and clusters of activated microglia at plaques. Today, the notion of chronic inflammatory processes surrounding amyloid pathology has become widely accepted. Last but not least, Fischer formulated another concept that present-day scientists validated. He spotted signs of an attempt by neurites to sprout and regenerate near plaque lesions, an idea developed by Carl Cotman and Thomas Arendt.

As for Alzheimer, in his 1911 paper he confirmed Fischer’s 1907 discovery of the neuritic plaque. Both scientists had some disagreements about how to interpret their findings, but they shared other interests, such as their work on neurosyphilis and their humane and scientific stance regarding the ravages the Great War was wreaking on the psyche of soldiers. But Alzheimer was unable to pursue debate with Fischer, or help establish his younger rival’s legacy, because he died in 1915 at age 51 (see ARF related news story).

During Fischer’s most productive time in Prague, one young Albert Einstein worked just a few blocks from him for a few years, Kalvach told the audience. Many other great thinkers in physics and medicine got out in time and established flourishing careers in their new countries, leaving behind an impoverished intellectual scene in central Europe, from which cities such as Vienna and Prague took decades to recover. Would that Fischer could have been so lucky.—Gabrielle Strobel 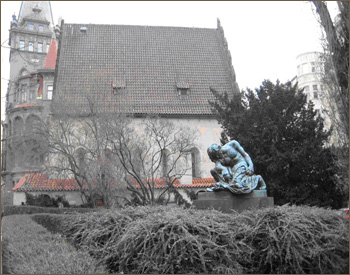