Updated 15 April 2009. The protein tau has for years bedeviled dementia researchers. Critically important in Alzheimer’s and many frontotemporal dementias, it has nonetheless been a slippery drug target. The basics of its wayward ways have been clear for decades: hyperphosphorylation followed by neurofibrillary tangle pathology that spreads in lockstep with disease progression. Yet the crucial details of exactly what goes wrong early on, and exactly how to set it right, have remained stubbornly elusive in vivo. At the 9th International Conference AD/PD 2009, held 11-15 March in Prague, researchers from Germany and Sweden presented a new model that they hope will change that.

The model is a transgenic zebrafish that develops tauopathy and death of flaming red neurons over the course of six days, and that responds to new tau kinase inhibitors. It is the result of a four-year collaboration between Dominik Paquet and colleagues in the laboratories of Christian Haass at the Ludwig-Maximilians University in Munich, neurogeneticist Reinhard Koester at the Helmholtz Zentrum in that city, Eva-Maria Mandelkow at the Max-Planck Unit for Structural Molecular Biology in Hamburg, and Ratan Bhat of AstraZeneca Research & Development in Södertälje, Sweden.

Danio rerio is a small aquarium fish that was touted as the new wave in vertebrate molecular biology some years ago, when genetic manipulation of the minnow became tractable. Ease of use was the mantra: because they remain translucent far into their development, zebrafish can literally develop in plain view under the microscope; because embryos and larvae thrive in 96-well plates, quasi high-throughput drug screens are an option; because they live in water, the scientist can simply drip their favorite compound into it and see if the fish develop a phenotype—no fiddly injection into the tail vein, as in mice, for example. “Testing hypotheses in zebrafish is quick and easy,” co-author Bettina Schmid said during her presentation.

The trouble was that getting sufficiently high expression of transgenes proved anything but quick or easy, and as those robust models weren’t coming on line, zebrafish faded from view in neurodegeneration research even as they became an established model in developmental biology. This is where most of the development effort lay in this study, Haass said in an interview. The current model expresses the human tau-P301L mutation, which causes FDTP-17, in zebrafish neurons from a newly designed vector system. One of the vector’s tricks is that a driver construct activates transcription off of a second responder construct in two directions, such that both the transgene and a fluorescent reporter gene are expressed simultaneously. This means every embryo that lights up red under the microscope expresses human tau—no PCR needed. The other trick lies in adding a human transposase gene on either end of the constructs to increase the number of insertions. “We inject that into fertilized eggs, outcross the founders, and look for red embryos. That’s all. It’s simpler than making transgenic mice,” Schmid said.

The researchers constructed the vector with exchangeable cassettes, so tau can be replaced with other transgenes. In this vein, they have more recently made fish overexpressing TDP-43, α-synuclein, and Aβ, which took about three weeks per line. Making such a line with this existing vector requires no deep technical knowhow, Schmid noted; the bottleneck at present is that relatively few academic institutions, or pharma companies, maintain a zebrafish facility. The biotech company Zygogen in Atlanta, Georgia, holds some patents on tau-transgenic zebrafish, but these do not apply to academic research.

In Prague, Paquet showed that the tau fish start expressing early makers of tau phosphorylation, e.g., AT180, some 32 hours after fertilization. Using a panel of tau antibodies, he showed that later markers then followed, and binding for each marker built up over a couple of days. By seven days, late tau phosphorylation markers were fully expressed; by five weeks, the neurons contained flame-shaped, Gallyas-stained neurofibrillary tangles. “This sequence of tau changes reproduces, on a compressed time scale, what happens in humans,” Haass said.

Like some tau-transgenic mice (e.g., P301L; Lewis et al., 2000), these fish express tau in the spinal cord and consequently have a motor phenotype. Paquet showed a simple example, whereby normal fish dart away when pricked with a toothpick but tau-transgenics endure this indignity with nary a twitch of their little tails. Moreover, their spinal cord neurons grew out more slowly in vivo than is normal, probably because axonal transport deficits held up delivery of supplies to their growth cones.

But perhaps the most telegenic feature of this new model is that it affords a front-row seat to the sight of sick neurons dying in vivo. Paquet showed a time-lapse video sequence of a 10-hour live imaging session. He had added to the water the dye acridine orange, which enters only dying cells. Conference attendees watched how a red, i.e., P301L tau-bearing, neuron started balling up, blebbing its membrane, letting in the dye, and then disintegrating. “This is, to my knowledge, the first in-vivo live imaging of neuronal cell death in a vertebrate system,” Haass said. Besides filming the movie, the scientists also monitored cell death quantitatively, noting a massive increase relative to control fish by six days after fertilization. 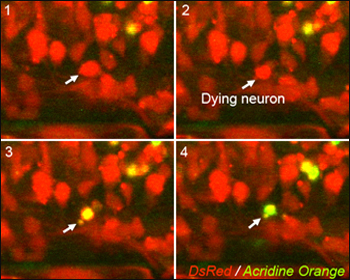 Finally, Paquet’s conference presentation included data about the possible application of this model for in-vivo validation of candidate drugs against the earliest step in the tauopathy cascade, i.e., tau hyperphosphorylation. Co-authors Bhat and colleagues at AstraZeneca have been using structure-based drug design of GSK3β co-crystallized with candidate inhibitors to come up with better inhibitors of that kinase, one of several known to phosphorylate tau (see also ARF Keystone story). GSK3β has been a drug target for many years, but previous inhibitors, such as AstraZeneca’s published compounds SB-216763 and SB-41526, were not safe enough for the clinic, and the widely prescribed human drug lithium chloride is neither very potent nor very selective. The new, unpublished compounds, AR164 and AR534, are potent in the desired low nanomolar range in vitro, and are also more selective than their predecessors for GSK3β. The new fish model came in handy for checking the compounds’ ability to cross the blood-brain barrier and show their moxy in a whole organism. (Yes, fish have a BBB, Paquet said; and yes, they also have GSK3β with a conserved active site.) Surprisingly, one of these new inhibitors performed as advertised, whereas the other did not, either because it bounced off the BBB or got degraded. This suggests that this zebrafish model can help to quickly eliminate the in-vivo duds from among a set of in-vitro candidates.

This might be a useful niche for drug studies, noted Haass. Independent industry commentators agreed that the zebrafish model is unsuitable for primary screens or to replace rodent testing, but that it could help select which in-vitro compounds to carry forward into more time-consuming and expensive rodent models. Moreover, the Munich group could test compounds that have entered clinical trials, such as AL-108/NAP or methylene blue. FDA-approved drugs could also be tested in this system for any unexpected effects on tauopathy. Finally, the system might enable scientists to address research questions, such as whether neurofibrillary tangles are necessary for neuronal death. This will be feasible once an ongoing technical upgrade from the current confocal setup to two-photon microscopy is complete, Haass said.

The movie elicited some oohs and aahs during the AD/PD session. When asked about the model, audience members mentioned some caveats, such as that the model is as artificial as overexpression models are in general, and that the tauopathy unfolds in the physiological context of a developing organism, not an aging one. The movie sequences can be viewed in the supplemental materials of the paper: Acridine uptake and death of P301L-expressing tau neuron; Motor phenotype after needle prod.—Gabrielle Strobel 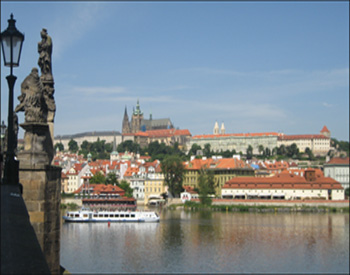