A story that broke at Keystone last month strongly pervaded the 9th International AD/PD conference in Prague, popping up in presentations and hallway chatter even before its lead investigator, Marc Tessier-Lavigne of Genentech in South San Francisco, California, spoke in the final session of the AD/PD conference. Tessier-Lavigne, whose summary and comments are at ARF Keystone story, reported no new data beyond those published on 19 February. But listening to scientists discuss it in Prague, it appears that the finding has stirred up the field of Alzheimer disease research at a time when many investigators are anxiously watching the progress of the current crop of anti-amyloid medicines in clinical trials. Hence, here is a brief summary of the thoughts expressed, questions to pursue.

In a nutshell, the Genentech scientists reported that an N-terminal cleavage product of APP binds the death receptor 6 (DR6) to trigger neurodegeneration in neurons starved of trophic support. Questions that bubbled up about this work include these: Is this pathway at play in AD? If so, does it diminish the importance of Aβ’s effect on synapses? Will both pathways be important? Are they connected? Does this science imply Aβ monotherapy trials won’t show efficacy?

The topic came up in talks, as well. To quote but two examples, Dennis Selkoe of Brigham and Women’s Hospital in Boston wrapped up a plenary lecture on the amyloid hypothesis with the remark that the Genentech work provides strong evidence for a normal physiological function of APP’s 35kD N-terminal fragment in axonal pruning during development, and that its relevance to AD remains to be shown. Martin Citron of Eli Lilly and Company in Indianapolis, Indiana, who cloned BACE with Bob Vassar and colleagues, noted in his talk that if this AD relevance indeed becomes clear, then that would make BACE an even more attractive drug target. That is because BACE inhibitors would reduce production of the APP N-terminal fragment as well as of Aβ. Such drugs could slow down both the proposed pathway of DR6-mediated neurodegeneration and the synaptic effects of Aβ, as both lie downstream from BACE cleavage. In contrast, γ-secretase inhibition would make no dent in the production of the troublesome N-terminal APP fragment. That said, Citron added, BACE continues to humble drug developers. After nine years of effort since the structure of BACE was solved, aided by the tailwind of knowledge gained during drug development against the similar enzyme HIV protease in the 1990s, only two BACE inhibitors have entered early-stage clinical trials to date, Citron noted (see ARF conference story).

More broadly, the Genentech paper has refocused the field’s attention on the nagging fact that it has been unable to establish a strong and direct connection between Aβ and neurodegeneration in vivo, even though neurodegeneration remains a defining feature of the human disease. The absence of frank neuronal death in APP- and PS1-transgenic mice has receded from view in recent years. Partly, researchers felt that the mice model early stages of AD, partly that they don’t live long enough for the neurons to die. Another possible explanation is that the models lack a still-unknown component of AD, for example, complement proteins that hasten neuronal death in humans but not mice, as suggested by Pat McGeer (for more on complement in AD and mouse models, see report of Bar Harbor Workshop). Even as these questions remained unresolved, research on synaptic biology and behavior started showing disruptive effects of various forms of Aβ oligomer in the hands of several independent labs. Indeed at AD/PD, Karen Ashe of the University of Minnesota in Minneapolis presented in her plenary lecture unpublished data on the toxicity of Aβ oligomers isolated from human AD brains. As this line of research has become increasingly prominent, it has fed a gradual redefinition of Alzheimer’s as a synaptic disease, with less emphasis on axonal and somatic degeneration.

Yet other voices have been cautioning for some time that Aβ explains only part of what goes awry in late-onset AD. John Hardy of University College, London, U.K., voiced a similar concern at a satellite symposium preceding AD/PD. Though Hardy is widely seen to have co-formulated the amyloid hypothesis, he has been reminding the field in recent years that the hypothesis still needs to plug the two stubborn knowledge gaps of a normal function of APP and the cause of neuronal death. “The amyloid hypothesis is not wrong but more complicated in ways that are difficult to deal with. The debate about what is the toxic species—plaque or oligomers—skirts the problem that none of them are toxic enough to cause neurodegeneration. That the mouse models have great plaques but almost no neurodegeneration should still concern us,” Hardy said.

The Genentech study prompted many questions for future study. Here is a sampling: Several scientists, including Frank LaFerla at University of California, Irvine, asked why APP-overexpressing mice do not show massive neurodegeneration if the 35kD fragment is so potent? After all, the precursor for the N-terminal fragment sits on the neural membrane in excess amount, and BACE is active. The answer might be found in the trophic factor dependence of the DR6 pathway, others said. Tessier-Lavigne emphasized that only starved neurons are vulnerable. The soluble N-terminal product of α-secretase shedding is neurotrophic, hence might extend a level of protection to these mice. Indeed, some of the earliest strains of hAPP-transgenic mice, made by Carmela Abraham of Boston University and Lennart Mucke of the Gladstone Institute in San Francisco drew little attention because their level of overexpression was insufficient to generate plaques, but these mice were notably protected in various models of neuronal injury (Mucke et al., 1994; Mucke et al., 1995; Masliah et al., 1997).

Another question that prompted curiosity was what kept the N-termini of APP to activate the DR6 receptor on neighboring axons running closely packed alongside each other. Other people asked what the role was, if any, of the APLPs, APP dimerization, or binding of APP to lipoprotein receptors, and whether the immediate N-terminal product of BACE cleavage, sAPPβ, could activate DR6, as well.

Abraham wondered what might be the identity of the mystery protease that cuts the 35 kD DR6 ligand out of sAPPβ. APP itself might provide a clue there, she said, as it comes in two flavors. The longer APP751 occurs in many cell types, and its N-terminal region contains the Kunitz protease inhibitor (KPI) domain, which is active against serine proteases (e.g., Hook et al., 1999). Neurons tend to express the shorter APP695 form without the KPI domain. If experiments show that only N-termini from the shorter APP activate DR6, that might point investigators toward which type of protease to look for, Abraham said. Incidentally, KPI’s role in blood clotting (Van Nostrand et al., 1992) was the first physiological function discovered for APP, and deserves renewed attention, Hardy said.

As for Tessier-Lavigne himself, he said after the lecture that if future experiments demonstrate a role of the DR6 pathway in AD, that role may well turn out to complement the amyloid hypothesis, not necessarily replace it. More than one pathway can operate in AD, and the notion, for example, that one leads from APP’s N-terminus to axonal degeneration while another leads from Aβ to synaptic impairment is not mutually exclusive. The new pathway at present has no evidence at all to explain why presenilin mutations cause AD, and presenilin’s functions and γ-secretase’s collective substrates will have to be examined to address this question.

All things considered, does Genentech’s foray into APP signaling mean clinical trials based on anti-amyloid strategies should not proceed? “Absolutely not,” Tessier-Lavigne said. “In fact, Genentech has an anti-Aβ antibody in Phase 1, and the trial continues apace.” (See Drugs in Clinical Trials.) “The antibodies that are further ahead have potential liabilities, in terms of either safety or efficacy, that might jeopardize this line of clinical investigation before the amyloid hypothesis has been truly put to the test,” Tessier-Lavigne added. Other clinicians voiced this concern at the AD/PD conference, as well.

What is clear, however, is that even at this early stage of research, the 35 kD N-terminal fragment of APP represents a potential new drug target worth exploring, Tessier-Lavigne added. It is a type of target that pharma and biotech companies have successfully exploited before, for example, with drugs such as infliximab, etanercept, and adalimumab. These biologics target tumor necrosis factor α, which, like the 35 kD fragment, is a ligand for the superfamily of receptors that includes DR6.—Gabrielle Strobel. 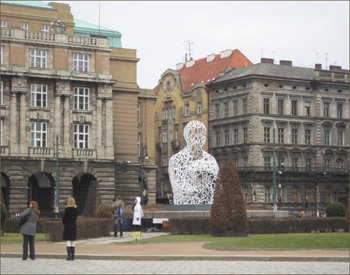