Luc Buée of the University of Lille was one of the few tauists among the plenary speakers at this year’s Alzheimer’s Association International Conference (AAIC), held 16-21 July 2011 in Paris. But he did not get a chance to tell the whole story. He was but a few slides away from finishing his talk when he had to step off the stage tout de suite because French President Nicolas Sarkozy was ready to address the audience.

Sarkozy updated a packed hall on the Republic’s National Plan on Alzheimer's and related diseases that his administration implemented for the years 2008 to 2012. "I am very happy that France is hosting, for the first time, the International Conference on Alzheimer’s Disease. We have made the fight against Alzheimer's disease a priority for France since my election in 2007,” said Sarkozy. His 15-minute address featured mots justes that garnered a burst of applause, namely, when Sarkozy announced that his government has pledged €1.6 billion (U.S.$2.3 billion at the time of the conference) to Alzheimer's-related programs over a five-year period. “This is considerable, but I tell you, it’s less costly to give money to researchers and physicians than to wait for the development of the disease,” he said. 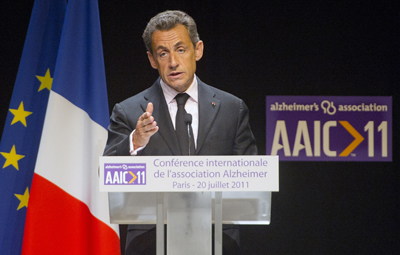 France is one of five European countries that has a dementia plan in place; the other four are Denmark, The Netherlands, Norway, and the United Kingdom (with separate plans for England, Scotland, and Wales). Additional European governments have identified the need for a plan to be developed (for more information, see the Alzheimer Europe website). In January 2011, U.S. President Barack Obama signed into law the National Alzheimer's Project Act (NAPA; see ARF related news story) requiring the creation of a national strategic plan to address the Alzheimer's crisis, but that law to date has no financing attached to it.

The French plan lists 11 objectives and identifies more than 40 comprehensive measures for reaching these objectives, some of which are centered around AD research (for details on the French plan, see the French Alzheimer Plan). Two hundred million euros have been set aside for research, and 70 million of those have already been spent, said Sarkozy at AAIC.

One of the unique features of the French plan is its oversight, said Joel Menard, who helped write portions of the plan. Menard now chairs the scientific board that advises the Fondation Plan Alzheimer, the foundation created to oversee the funding of research under the French plan. “All those involved in heading the various research projects meet around the table once a month to discuss progress, and every six months there is a meeting in the presence of Sarkozy,” explained Menard. “This oversight is to make sure that the money is used correctly and not lost in administration. I guess this is analogous to the U.S. Congress having scientists testify to them once a year,” Menard said.

Currently the Fondation Plan Alzheimer funds more than 100 research projects, said Sarkozy. Projects include the creation of automated image processing algorithms, the long-term monitoring of large patient population cohorts, high-speed genotyping of patients and controls, as well as genome sequencing of the microcebe, a small lemur that develops a disorder comparable to AD. In addition, the French plan has earmarked €5.5 million over five years for doctoral and postdoctoral grants.

Going From SNPs to Function
One of the research initiatives Sarkozy singled out is the European Alzheimer's Disease Initiative (EADI), led by Philippe Amouyel at the Institute Pasteur de Lille and Lille University. (Amouyel also directs the Fondation Plan Alzheimer and was acknowledged during Sarkozy’s speech, along with Menard, Philippe Lagayette, president of the foundation, and Florence Lustman, who has been overseeing the plan on behalf of Sarkozy since February 2008.)

Since then, EADI has formally joined hands with other genomic consortia around the world through the International Genomics of Alzheimer's Project (IGAP; see ARF related news story) to increase statistical power for the discovery of further genetic determinants of AD. IGAP, funded in part by the Fondation Plan Alzheimer, made possible two large GWAS published earlier this year, bringing the total number of AD-susceptibility genes to 10 (see ARF related news story on Naj et al., 2011 and Hollingworth et al., 2011; see top 10 on AlzGene).

EADI researchers are continuing to validate SNPs in larger cohorts and with different statistical methods. For example, a meta-analysis using available data from AlzGene and genotypes from public repositories confirmed that the association of the CR1 SNP rs3818361 to AD risk is highly significant, but its estimated effect size is modest, Lambert said at AAIC. Many polygenic diseases involve several gene variants, each contributing a small portion of the overall disease risk. During his talk, Lambert also presented an emerging approach for characterizing genetic risk factors not detected by classical GWAS. Called genomewide haplotype study (GWHS), this approach uses multi-allelic haplotype markers rather than single-SNP markers in mapping disease loci. Lambert’s group tested more than 37 million associations for each DNA sample to identify a haplotype on chromosome 10p13 that is systematically associated with AD in seven independent European populations comprising 9,938 AD patients and 15,578 controls.

Lambert’s group is further trying to determine how different SNPs might affect the function of genes involved in AD. One approach is to sequence the DNA at a particular locus in hundreds of AD patients, or, as a faster and cheaper alternative, to look for variants in genomes that have already been sequenced through the 1000 Genomes Project (see ARF related news story). Using this approach, Bart Dermaut, a researcher in Lambert’s lab, discovered that many variations at the BIN1 locus, including the most frequently occurring one (SNP105), are in the 5’ region of the gene, suggesting that they might affect BIN1 transcription.

To test the hypothesis, Dermaut and colleagues looked at the expression of BIN1 by immunohistochemistry in the brains of 64 deceased AD patients and 64 people without the disease. They found that BIN1 was expressed at higher levels in AD brains. More specifically, people carrying one copy of the SNP105 expressed 32 percent more BIN1 than controls, whereas people homozygous for the variation expressed 50 percent more. The expression of BIN1 in AD patients further increased according to the Braak stage (see AD clinical guidelines), said Dermaut.

The researchers then turned to the fruit fly, Drosophila melanogaster, as a number of Drosophila AD models are available that overexpress either amyloid-β or tau (see ARF Live Discussion). When the scientists used RNAi to knock down expression of the BIN1 fly ortholog, called Amph, they improved readouts of tau overexpression and toxicity, such as retinal degeneration, notal bristle loss, mushroom body ablation, and neuronal motor performance. On the other hand, BIN1 knockdown did not affect Aβ-related phenotypes, such as the rough eye phenotype. If the results pan out in subsequent analyses, BIN1 “would be the first AD risk factor mechanistically related to the tau pathway,” said Dermaut. For more on French AD science, see Part 2 of this series.—Laura Bonetta.