As might be expected, there was a potpourri of French AD science at the Alzheimer’s Association International Conference (AAIC), held 16-21 July 2011 in Paris. One French research initiative par excellence, highlighted in Part 1 of this series, is the European Alzheimer's Disease Initiative (EADI)—but many other efforts also stood out.

EADI genomic studies have relied in part on DNA samples from the prospective Three-City (3C) cohort study (see ARF related news story). This population-based observational study of community-dwelling elderly in the three French cities of Bordeaux, Dijon, and Montpellier has been drawing attention in the U.S. of late for its deep neuropsychology dataset and insight into preclinical AD.

The study has been running for over a decade, and researchers are currently in the process of analyzing the 10-year data. At AAIC, Karen Ritchie at La Colombière Hospital in Montpellier, France, presented four-year follow-up data on risk factors that contribute to the progression from MCI to dementia. The principal factors for men were, in order of significance, ApoE4 allele, stroke, low level of education, loss of Instrumental Activities of Daily Living (IADL), and age. In women, progression most frequently followed IADL loss, ApoE4 allele, low level of education, subclinical depression, use of anticholinergic drugs, and age. These risk factors are consistent with those identified in other population-based studies, said Ritchie. Revised diagnostic criteria for the MCI phase of AD have been recently issued (see MCI Symposium and ARF Webinar).

In another session at AAIC, Jean-Charles Lambert at the Institute Pasteur de Lille mentioned that an analysis based in part on the 3C Study population, led by Dominique Campion of the University of Rouen, gave new insight on the risk for developing AD faced by carriers of the ApoE4 allele. Results showed that people with two copies have a risk of developing AD similar to that women with the BRAC1 mutation have for developing breast cancer (Genin et al., 2011). This result has important implications for disclosing ApoE status to people participating in AD trials, said Lambert (see ARF related news story).

In addition to the 3C Study, the French government is supporting the development of a national network of patients with familial AD, similar to the Dominantly Inherited Alzheimer Network (DIAN) in the United States (see ARF related news story and ARF news story). The French network consists of a collaboration of 23 memory clinics in Lille, Rouen, and Paris. “The main goal of this network is to improve care for patients with early onset AD, but it also makes biological samples from more than 120 families all over France available for research,” said Joel Menard of Fondation Plan Alzheimer. 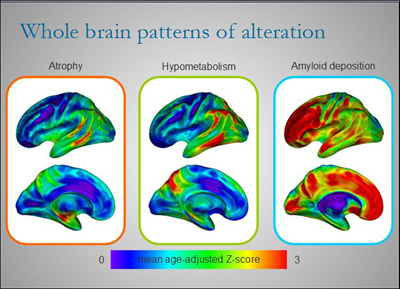 Different regions of the brains of AD patients are affected to varying degrees by atrophy, hypometabolism, and amyloid deposition at any one point in time. Although there is some overlap, each alteration paints its own picture of the disease. By combining several imaging techniques to view AD in patients over time, researchers like Gaël Chételat are starting to build a dynamic picture of disease development and progression. View larger image. Image credit: Inserm U923

These modalities have opened a window into some of the changes that occur in the brains of people as they progress from MCI to AD. PET imaging combined with Pittsburgh Compound-B (PIB), for example, makes it possible to view the increase in Aβ deposition in the brain of patients (see ARF related news story and Hatashita and Yamasaki, 2010). Other changes that occur during this stage include brain atrophy as detected by MRI and a decrease in glucose metabolism as detected by PET combined with the radiotracer 18-fluorodeoxyglucose (FDG-PET) (see ARF related news story). In a plenary session and several posters at AAIC, Chételat and colleagues compared results obtained using these different markers.

In one study, 74 healthy elderly people underwent a PIB-PET scan and two MRI scans 18 months apart to look at differences in amyloid deposition and rate of brain volume change over time, respectively. Chételat and colleagues found that the rate of brain atrophy was higher in people with high Aβ deposition at baseline than in those with low Aβ load, with highest significance in the temporal neocortex and the posterior cingulate cortex. Her findings support the fast-growing notion that Aβ deposition is a pathological condition associated with accelerated neuronal loss. In another study, Chételat and colleagues examined by MRI 61 healthy people aged 19 to 84. They found that the density of the brain’s white matter decreases with increasing age, mainly in the anterior corpus callosum (CC), prefrontal lobe, and posterior CC. This change in white matter parallels the shrinking of the hippocampus, and more specifically of a subpart of this structure, the subiculum, which is the major output area of the hippocampus.

Perhaps the most exciting result from Chételat’s work is that different brain regions are affected by Aβ deposition and other markers of AD to varying degrees at any given point in time. When the researchers looked at three different markers of AD in 16 patients with clinical AD and 26 healthy controls, they found that in most brain areas, the amount of local Aβ deposition exceeded the degree of glucose hypometabolism, which in turn exceeded atrophy. Aβ deposition was highest in the anterior cingulate and prefrontal cortex, where there was little atrophy and hypometabolism, especially in early disease. However, in the hippocampus, the hierarchy was reversed. Here there was a lot of atrophy, whereas hypometabolism was mild and Aβ deposition negligible. Neurofibrillary tangles in early AD were typically confined to the medial temporal lobe and strongly correlated to atrophy in this area.

The regional lack of correlation among the different ways of looking at AD evokes a sense of déjà vu in many scientists. Indeed, the observation has emerged in a piecemeal fashion over many studies and years. It has long puzzled the field, and fueled skepticism of the amyloid hypothesis. As illustrated by the work of Chételat and others, the tools have now been developed for longitudinal multimodal imaging to resolve these earlier findings and reach for le grand prix of understanding brain imaging in AD. That is, establish an integrated, dynamic picture of what changes occur when and where as the brain slides toward AD, and how these changes might be connected, i.e., drive each other, as disease develops.

Moving to the Clinic
Another widely noticed recent French contribution to international AD research has been a new diagnostic framework for prodromal AD recently proposed by the International Working Group for New Research and Criteria for Diagnosis of Alzheimer’s Disease (Dubois et al., 2010 and ARF related Webinar). Researchers hope that the diagnostic guidelines will help them avoid costly faux pas of previous clinical trials.

At AAIC, Bruno Dubois of the Pitié-Salpêtière Hospital in Paris presented results of a double-blind, randomized, placebo-controlled study of donepezil (see ARF related news story), one of the four FDA-approved drugs available for treating AD symptoms, in a carefully selected population.

A total of 216 patients with early AD were randomized to receive 10 mg daily of donepezil or placebo. These patients did not have dementia, i.e., would not have met the old 1984 diagnostic criteria for AD, but had increased amyloid deposition in their brains as indicated by PET scans. Researchers obtained automated reading of hippocampus size using a new software developed by Marie Chupin at the University of Paris. The results showed that patients in the donepezil group had a 45 percent lower rate of hippocampal atrophy than those in the placebo group after one year. There was no difference between groups on any of the cognitive measures included in the study.

Dubois said they were able to see such a striking effect on hippocampal volume with this drug because they selected the right population, otherwise the effect would have been diluted. “The study is exciting for two reasons. It shows a dramatic effect of a drug [on a biomarker], and it validates the selection criteria for prodromal AD,” Dubois told ARF. “The clinical trial was conducted entirely in France,” he added. MRI is being discussed internationally as an outcome measure for earlier-stage clinical trials.—Laura Bonetta.