As β-secretase (BACE) inhibitors head into Alzheimer’s disease trials, researchers are paying close attention to what else BACE1 does besides snip amyloid-β from the amyloid precursor protein (APP). Christian Haass fleshed out the proteolytic pathway of another BACE1 substrate, neuregulin, and emphasized that BACE1 function might not be restricted to development at "From Science to Therapeutics: The Best Way Forward," a workshop held 15-17 April 2013 in San Francisco, California. He also described a role for the related protease BACE2 in melanocytes. Haass leads research at Ludwig Maximilians University, Munich, and oversees the Munich branch of the German Center for Neurodegenerative Diseases (DZNE), a government-funded consortium headquartered in Bonn. DZNE co-sponsors the annual workshop together with the Gladstone Institute of Neurological Disease, San Francisco.

When Haass and others reported that peripheral nerves are poorly myelinated in BACE1-deficient newborn mice (Willem et al., 2006), they noted the striking resemblance to animals lacking neuregulin 1. This transmembrane protein signals through its epidermal growth factor (EGF) domain to regulate myelination, which raised the prospect that BACE1 and neuregulin 1 might act in the same pathway. The accumulation of unprocessed neuregulin 1 in BACE1 knockout mice lent credence to the idea and suggested neuregulin 1 as a natural substrate for the secretase. Neuregulin 1 also undergoes cleavage by ADAM (a disintegrin and metalloproteinase) proteases, which include ADAM10, the α-secretase that cuts within the amyloid-β domain of APP.

Scientists had assumed that neuregulin 1 type III signals as an autocrine factor, because they believe its extracellular EGF domain remained tethered to the cell membrane. However, in San Francisco, Haass reported that BACE1 and ADAM17 each cut neuregulin 1 on either side of the EGF motif, releasing it to drift away in the extracellular space.

To map neuregulin 1 cleavage sites, the scientists expressed the sheddases in HEK293 cells containing flag-tagged neuregulin 1 chimeras. They analyzed any cleaved neuregulin by mass spectrometry after immunoprecipitation with anti-flag antibodies. Notably, the BACE1 and ADAM17 sites on the C-terminal side of neuregulin’s EGF domain occur on the N-terminal side as well, Haass reported. The flanking sites suggest that BACE1/ADAM17 can solubilize the EGF domain. BACE1 cleaved neuregulin 1 “much more efficiently than expected,” said Haass. His group discovered that the N-terminal BACE1 site on neuregulin shares the same sequence as its counterpart in APP with the Swedish mutation. That genetic variant dramatically increases BACE1 processing.

To test if the EGF domain was indeed released from neuregulin, the researchers generated antibodies to it and used them to locate the peptide. Immunoblotting experiments showed that primary rat neurons make soluble EGF peptide (sEGF), and that BACE inhibitors wipe out its production. Given that neurons excise the peptide in such a fashion, “it is likely that neuregulin 1 signals through its soluble EGF domain,” Haass said. Graduate student Daniel Fleck and others in the lab did the work with Ludwig Maximilians University colleague Michael Willem.

The next big question was whether sEGF signals in a paracrine fashion. To address this, the researchers knocked out the BACE1 orthologue in zebrafish. Then, to visualize myelination, they mated the BACE1-deficient fish with a transgenic line expressing green fluorescent protein in myelin-forming Schwann cells and oligodendrocytes. Recapitulating the mouse BACE1 knockout phenotype, nerves in the peripheral nervous system were undermyelinated in fish missing BACE1, Haass reported. He showed they could partially restore the defect by injecting the fish with mRNAs for β-EGF. Importantly, central nervous system neurons were unaffected. The researchers published much of this data in the May 1 Journal of Neuroscience. 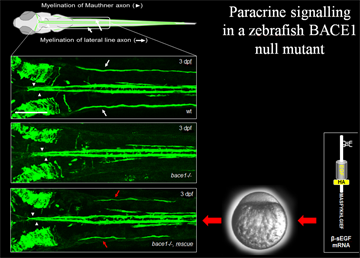 This work settles several longstanding questions about BACE1 and neuregulin function, Haass said. Since the 2006 reports of peripheral nerve hypomyelination in BACE1 knockout mice, scientists wondered if the enzyme also supports myelination in the CNS. “There has been uncertainty about this, but now it is crystal clear. At least in zebrafish, BACE1 deficiency has no effect on CNS myelination,” Haass told Alzforum.

Moreover, scientists have debated whether the downstream effects of neuregulin 1 processing depend on which protease cuts the substrate. After all, this is the case for APP. Some believed that BACE1 cleavage would produce a product that is competent to signal, whereas ADAM cleavage would not. However, “we showed it does not matter—either protease produces a molecule fully capable of signaling,” Haass said.

In a separate study published online February 14 in the Journal of Neurochemistry, Haass and LMU colleague Bettina Schmid found that BACE1 and BACE2, though catalytically similar, have different biological functions (van Bebber et al., 2013). First author Frauke van Bebber, a postdoctoral fellow in the group, counted neuromasts, the mechanoreceptive organ of the fish’s lateral line, in BACE1 and BACE2 knockouts. The number of neuromasts the fish develops depended on neuregulin 1 processing. Their numbers rose in BACE1-deficient animals but not in BACE2-deficient fish. BACE1/BACE2 double knockouts had as many as BACE1 knockouts, suggesting that the two enzymes have distinct functions with respect to neuregulin signaling.

Moreover, BACE2 deficiency did not affect myelination. It did, however, compromise melanocytes. Whereas these skin pigment cells normally cluster at the tip of the tail, they migrate past their normal destination in BACE2-deficient animals, Haass reported. This jibes with color effects that Bart de Strooper and colleagues at KU Leuven, Belgium, see in BACE2 knockout mice (see Dominguez et al., 2005). Their fur is silverish instead of the usual black, de Strooper told Alzforum. Together with Guillaume van Niel of Institut Curie in France, de Strooper’s group recently determined that BACE2 is responsible for the color change. Other research suggests that BACE2 regulates pancreatic β-cell function (Esterházy et al., 2011).

Toward the end of his talk, Haass presented new data on yet another BACE1-dependent neuregulin pathway that suggests the secretase could play an important role not just during development but also in adulthood. This new role concerns maintenance of muscle spindles. These studies were done in collaboration with Carmen Birchmeier's lab at the Max Delbrück Center for Molecular Medicine in Berlin. Details of this study are submitted for publication, Haass told Alzforum.

Other scientists at the meeting found Haass' data compelling. Some suggested that BACE inhibitor trials should look carefully for phenotypes that might reflect changes in neuregulin 1 processing—for example, early hints of a neuropathy. At this point, however, researchers do not know whether the biology Haass reported in zebrafish occurs in humans, how strongly BACE1 and BACE2 would need to be inhibited in people to block it, and whether the drug doses in the current trials come anywhere near those levels of inhibition.—Esther Landhuis.

This is Part 2 of a three-part series. See also Part 1, Part 3. Read a PDF of the entire series.