When 225 researchers from around the world convened in Miami to exchange the latest on β amyloid positron emission tomography (PET) on 12-13 January 2012, there was a palpable sense of urgency. At the 6th Annual Human Amyloid Imaging (HAI) Conference, the specter of potential approval, possibly within months, of the first radioligand for clinical use hung over the room. Hence, as scientists openly discussed new developments on all fronts of this young field, several themes stood out for reaching beyond the research data themselves. Scientists wrestled with whether and how to disclose amyloid status to people without dementia. They discussed how they would use amyloid PET in the clinic. They focused on methods to read whether a person’s scan is positive just by looking at it versus more quantitative ways of interpreting it.

On the research front, there was ample news to share as more groups enter the field and data accrue. Perhaps most importantly, some 150 presymptomatic carriers of Alzheimer’s disease (AD) mutations in their twenties, thirties, and forties by now have had amyloid scans. Researchers are getting a stronger sense of how ApoE and age influence amyloid deposition, and are starting to try to pinpoint when and where this pathology first crops up in the brain. Right up there in researchers' estimation were the growing number of longitudinal studies that follow cognitively normal and mildly impaired people at varying degrees of genetic risk. The overall trend of those studies appears to be that brain amyloid deposition is bad news, though it can take years until a given person suffers cognitive consequences, and the initial cognitive decrements are subtle. “I think the notion that amyloid has no effect in people who are asymptomatic is not supported by data,” said Denise Park of the University of Texas at Dallas, whose group published a paper to this effect (Rodrigue et al., 2012).

But even as longitudinal studies converge, all does not fit. The conference brought to a boil a theme that has been simmering: In a significant fraction of cases, amyloid imaging disagrees with a patient’s clinical diagnosis, and more research is needed to find out which of the two is correct. This process may shake up the diagnosis of AD and, indeed, numerous related forms of dementia. It may give unexpected prominence to non-AD dementias, for example, the frontotemporal varieties. To put diagnosis of AD and FTD on more of a molecular imaging plane, the field urgently needs ligands to trace all defining pathologies, above all, neurofibrillary tangles. At the HAI meeting, the first tau-only PET data in humans received rapt attention; two more compounds are in late preclinical stages. (For nuclear medicine to delineate AD and dementia with Lewy bodies, an α-synuclein tracer is needed, but none appears in sight yet.) This news series will cover each of these points in a dedicated story below.

Co-organized by Keith Johnson of Massachusetts General Hospital, with help from Bill Klunk and Chet Mathis at the University of Pittsburgh Medical School, Pennsylvania, and Bill Jagust of the University of California, Berkeley, the HAI Conference has doubled in size from its beginnings in Boston in 2005. It stands out among conferences in that the organizers assemble the program from among the submitted abstracts only a month prior to the actual meeting, and budget ample discussion time into every session and between sessions—both in an attempt to offer a forum in which new data can be shared and absorbed in depth. The conference recognizes junior investigators in the field with a Young Investigator Award. This year it went to Manja Lehmann of the University of California, San Francisco, for her multimodal imaging study linking atrophy and hypometabolism by FDG-PET in functional networks of the brain that are specifically affected in the language or visual variant of AD as compared to its predominant amnestic presentation. Lehmann found that this signature identified each variant, while amyloid PET was positive more globally in all three variants of AD and did not distinguish among them. This, Lehmann told the audience, would imply that amyloid imaging can flag AD but not explain its heterogeneity, as factors other than amyloid explain region-specific patterns of neurodegeneration and atrophy in the disease’s subtypes. 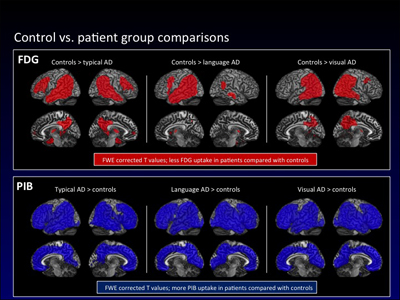 The organizers anchor presentations on detailed imaging and related biomarker data with a technical lecture aimed at helping the field improve techniques and eventually arrive at best practices. In his lecture, Robert Koeppe of the University of Michigan at Ann Arbor offered the advice of a widely regarded leader in PET to his colleagues in the trenches of amyloid imaging. He reassured the field that the target regions for an amyloid scan indicating AD pathology are well established and replicate well across studies. However, Koeppe said, studies pinpointing when and where amyloid deposition begins are well advised to use whole brain scans. One open question with which researchers wrestle is what reference region is best. Many use the cerebellum because it contains little amyloid in LOAD, but it is not ideal for longitudinal research or studies of familial AD. Pons or even white matter are being studied as alternatives, and Koeppe said that quantitative research would do best to combine all three and normalize against that. On a seemingly arcane technical point that last year pervaded discussions at HAI—whether to try to correct for atrophy and how best to do so—Koeppe advised scientists to keep things simple. Partial volume correction adds enough uncertainty and error, Koeppe said, that it is generally not worth the trouble, except in longitudinal studies (Koeppe, 2012).

A question that reliably buzzes in hallway chats among nuclear medicine physicians is how the present crop of 18F compounds, notably florbetapir, the furthest advanced, compare to Pittsburgh compound B (11C-PIB). Side-by-side comparisons of radioligands are rare, but Koeppe found one. He analyzed data on 29 participants in the Alzheimer’s Disease Neuroimaging Initiative (ADNI) who underwent first a PIB and then a florbetapir scan on the same scanner. Koeppe said the main difference between the compounds lies not, as is often thought, in florbetapir’s slightly higher white matter binding. Rather, he said, it is florbetapir’s lower cortical signal, which in turn is partly offset by its lower noise. In essence, both tracers worked for visual reads of clearly positive or clearly negative scans, Koeppe said, though for scans on the borderline, the florbetapir signal being about 60 percent that of the PIB signal may become significant. This would not interfere with routine diagnostic use but might be a disadvantage when trying to quantify precisely the first appearance of amyloid deposition, small longitudinal changes, or small drug effects, Koeppe said, and other scientists at HAI largely agreed. Researchers from companies that are beginning to incorporate amyloid PET into their treatment trials said they consider these differences minor.

HAI shakes up its all-imaging-all-the-time diet with two lectures from related fields in AD research. In the first of this year’s keynote lectures, Vahram Haroutunian of Mt. Sinai School of Medicine in New York City described how studying age-related changes in the brain’s transcriptome based on autopsy samples suggests that scientists broaden their view of dementia beyond the boundaries of plaques and tangles. This work suggests that in order to escape dementia, the aging brain somehow needs to retain its ability to respond robustly to factors that are causing dementia, from Aβ to tau to α-synuclein and other insults. This notably requires transcription of protective immune and anti-inflammatory genes, Haroutunian said (Haroutunian, 2012). Claudia Kawas of the University of California, Irvine, followed with a keynote on the 90+ Study, a longitudinal, community-based prospective observation of representatives of the fastest-growing segment of the population. In a nutshell, this nine-year-old study of some 900 people in their nineties has shown that the prevalence of dementia in the oldest old doubles every five years, just as it does in people’s seventies and eighties, dispelling the common perception that the very old have somehow escaped dementia. The 90+ Study further showed that the suite of proposed AD risk factors—from vitamins, alcohol intake, caffeine, homocysteine, and others—does not protect against dementia in very old age. In contrast, and tantalizing to the assembled HAI audience, autopsy analysis from the 90+ Study showed that the total area of brain amyloid and tau pathology correlated with people’s cognitive decline before they died (Robinson et al., 2011). Overall plaque area was more strongly related than any particular type of plaque. And more recently, initial amyloid imaging results in a small subgroup of the 90+ Study participants appear to suggest that, even among the oldest old, people decline rapidly in the 1.5 years after having had a positive scan, Kawas said (Kawas, 2012).

If the finding on plaque area and cognition holds true, it might simplify things for amyloid imaging, said Rik Vandenberghe of Catholic University, Leuven, Belgium. It might put aside ongoing debate about which plaque to call what and how strongly each type binds PET tracers. Plaque area is a continuous measure that is more straightforward in practice than having to distinguish between types of plaques, Vandenberghe added.

The program book containing all abstracts, as well as video recordings of two keynote lectures, has been posted and is freely available at the HAI website.—Gabrielle Strobel.