For cerebrospinal fluid tests of Alzheimer’s biomarkers, the time has come to grow up. The markers have shown great promise while being studied with research use only (RUO) assays, but as large multicenter studies and drug trials are pressing in on the field, the bar is rising for how reproducibly the tests have to perform in labs and hospitals around the world. On 14 July 2012 in Vancouver, Canada, on the eve of the Alzheimer’s Association International Conference, some 50 members of the Global Consortium for the Standardization of CSF Biomarkers (GCSB), sponsored by the Association, met to take stock of what its members had been working on in various collaborative projects over the course of the past year. Besides monitoring performance and developing new assays (see Part 1), scientists have recently managed to persuade the two definitive international certification and reference bodies to take on the cause. If all goes well, this joint project could, once and for all, fix the measurement problem that has been dogging CSF Alzheimer’s assays, said Henrik Zetterberg of the University of Gothenburg, Sweden.

What are these bodies and what will they do? One is the Institute for Reference Materials and Measurements (IRMM) based in Geel, Belgium. One of the seven institutes of the Joint Research Centre, a Directorate-General of the European Commission, the nonprofit IRMM is a metrology institute. It is also one of the world's leading distributors of reference materials. The European counterpart to the U.S. National Institute of Standards (NIST), IRMM operates four accredited European Union reference laboratories, whose 300 employees work under International Organization for Standardization (ISO) standards. The big news, said Zetterberg, is that IRMM has formally decided to assist GCSB in the development of certified reference materials for CSF Aβ42, total tau, and phospho-tau. Once these materials are in hand, IRMM will produce and provide them worldwide at nominal cost. Perhaps not surprisingly to scientists in the AD field, the IRMM manager for the project, Ingrid Zegers, specializes in "difficult proteins," said Zetterberg, adding, “We are very glad we have her.”

The International Federation of Clinical Chemistry is now also in on the act. The IFCC is the worldwide organization for clinical chemistry and laboratory medicine. It has the authority to certify reference materials and reference methods. It collaborates with other organizations, such as the IRMM, on setting global standards in clinical laboratory procedures. In August 2011, Anders Larsson of the Swedish Society for Clinical Chemistry submitted a project proposal to the IFCC, and in October the organization agreed to take it on.

“The IFCC concluded that the AD fluid biomarker field is mature,” said Zetterberg. In May, the IFCC’s scientific division formed a working group that contains, besides Larsson, Zegers, and Zetterberg, Kaj Blennow of the University of Gothenburg, Magdalena Korecka in the lab of Les Shaw at the University of Pennsylvania, Philadelphia, and Piotr Lewczuk at the University Hospital Erlangen, Germany. The working group will develop international reference materials for CSF AD assays, and establish reference methods with which Aβ and tau values will then be assigned to these reference materials.

How will this work? In parallel, several groups, including the GCSB, will develop candidate reference methods and submit those protocols to the IFCC working group to evaluate. The IFCC scientific division advises along the way and, following independent validation, submits those that fit the bill up the totem pole to the IFCC council for certification.

One such candidate method is already in the works. UPenn’s Shaw presented an update on a collaborative project between UPenn, the analytics companies Waters and PPC, and the University of Gothenburg to combine solid phase extraction with ultra-performance liquid chromatography-tandem mass spectrometry to quantify Aβ peptides in human CSF. Inspired by a paper by Erin Chambers, who recently left Pfizer for Waters (Lame et al., 2011), the GCSB method uses no antibodies, which are a source of measurement variability. Its trick lies in direct sample preparation, Shaw said. All Aβ in the CSF sample gets extracted with a high concentration of guanidine hydrochloride—the solvent, incidentally, that George Glenner and Caine Wong used in their seminal work busting up plaques and isolating the Aβ peptide for the first time (Glenner and Wong, 1984). An inter-lab round robin study of the candidate method will start soon, Shaw said. One potential hitch: Guanidine hydrochloride denatures all Aβ species present in the CSF—monomers, dimers, oligomers, the whole gemisch. The clinical performance of this type of method is therefore completely unknown, Shaw cautioned. 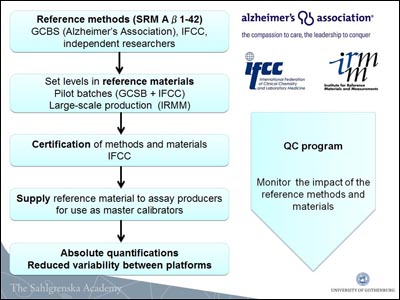 As is the case in many aspects of AD research, similar efforts on tau are further behind.

In Vancouver, Zetterberg, showed a flowchart of the IRMM and IFCC process—it is not a simple 1, 2, 3, done. 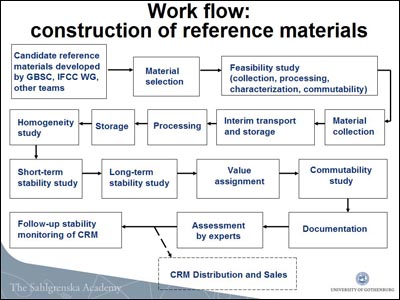 In essence, once both a certified reference material and method are in hand for a given marker, the IRMM will apply the method to the materials to set the actual value for the marker at hand, and then sell those materials to kit manufacturers at nonprofit prices. The reference method is not meant for use at individual labs around the world.

Shaw expects that a first version of an Aβ42 candidate reference method may be mature enough to be discussed at the IFCC during the next year for the federation’s feedback. For his part, Zetterberg expects this fall to make a first pilot batch of a candidate reference material and send it to Zegers’ lab for independent verification.

“This work does not make headlines, but it is critical,” Zetterberg summed up the group’s sentiment at day’s end.

Readers keen to immerse themselves in a page-turner on certified reference materials may want to take the August 2012 Biomarkers in Medicine to the beach. A theme issue dedicated to AD prevention research, it is chock full of articles on reference measurement procedures, proficiency testing, cut-point determination, and other engrossing adventures of clinical chemistry. There. Who needs romance or murder mysteries?—Gabrielle Strobel.