A mere stone’s throw from shady bookstores and rundown bail bond shops stands an $80 million steel spectacle that Las Vegas mayor Oscar Goodman hopes will help revitalize this part of town. The landmark building is also poised to strengthen drug development for Alzheimer’s and other neurologic diseases, where progress has stalled amid fragmented patient care and low clinical trial recruitment. As the newest site in the Cleveland Clinic network, the Lou Ruvo Center for Brain Health is arguably breaking ground for an innovative, systems-wide approach to clinical trials. 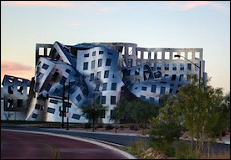 Such efforts are needed because therapeutic trials are increasingly being run by commercial groups, and are going abroad to global sites that are sometimes inexperienced or may introduce cultural and language variation into the dataset. This trend concerns Jeffrey Cummings, director of the Lou Ruvo Center, which opened its doors in the summer of 2009 and now sees some 75 patients a week for a combination of clinical care and research. “We can capture a greater proportion of trials within the U.S., and get many more patients enrolled in them, if we capitalize on the ability of healthcare systems to embrace clinical trials as a major part of their activities,” Cummings told ARF. “Our purpose is to advance new therapeutics and diagnostics for AD by developing what will be the world’s largest AD clinical program that harnesses the power of a networked healthcare system.” The new center looks to gain some national prominence with the May 1 CNN airing of Unthinkable: the Alzheimer’s Epidemic, in which talk show host Larry King and Ron Reagan, the late President’s son, will be seen visiting the new center.

Launched with funds raised by Las Vegas businessman Larry Ruvo, whose father Lou died of AD in 1994, the 65,000-square-foot center was conceived by the late Leon Thal (see ARF obituary) as an enterprising model for patient care and outside-the-box collaborative research in neurologic disease. Wanting a signature building commensurate with these lofty goals, Ruvo summoned world-class architect Frank Gehry to the task. Originally, the University of Nevada, Reno, was to provide infrastructure and run the center’s clinical operations, but a dearth of dollars dried up those plans just as Cleveland Clinic was looking to expand westward. The entrepreneurial healthcare provider swooped in to cut a deal in February 2009 (see ARF related news story), and last summer hired Cummings to head the Ruvo Center’s research and operations and to build neuroscience programs at Cleveland Clinic’s main campus and other sites in Lakewood, Ohio, and Weston, Florida. “We will simultaneously have the same trials going on with the same IRB (institutional review board) in all these and possibly other sites,” said Cummings, who formerly directed the Alzheimer’s Disease Research Center at the University of California, Los Angeles. The UCLA center now runs under the leadership of interim director John Ringman.

The Ruvo Center is focusing on patient services, and research at the Las Vegas site will be translational. “Now we are part of Cleveland Clinic,” Cummings said. “The vision had to be consistent with the new operational reality.” Cummings’ broader thinking is that the patients-first philosophy of the clinic will bolster therapeutic development because it can empower patients to help solve the diseases that afflict them by participating in clinical trials, Cummings told ARF. “We are an integrated clinical and research operation that works with patients to develop new therapeutics.”

The vast majority of dementia patients have a hard time getting adequate care, said Rachelle Doody, who directs the AD and Memory Disorders Center at Baylor College of Medicine in Houston, Texas. “Their internist doesn’t know about their dementia. Some get one set of blood work, others another. Many physicians don’t have well-developed approaches that coordinate with each other,” Doody said. Furthermore, she noted that only a tiny fraction of newly diagnosed dementia patients “even consider enrolling in a trial, because the doctor doesn’t know they exist, or doesn’t know where they are.” (For more on integration of patient care and clinical research, see Doody, 2009.)

Furthermore, at academic memory centers, patients often need to trek all over campus for their various assessments. With neuropsychiatric testing in the memory center, lab work in a separate building, and brain imaging done across campus in the radiology department, getting comprehensive care can turn into a drawn-out navigation exercise for the navigationally challenged and their caregivers. “In academic settings, things tend to be scattered around,” Cummings said. “Here, they are all provided within one building, including information about clinical trial opportunities.”

Spacious, semicircular hallways with brightly colored furniture remove the dreary institutional feel one commonly associates with hospitals. The space combines easy access to magnetic resonance imaging (MRI), neuropsychiatric assessments, occupational and physical therapy, social work referrals, and longitudinal care. Patients go into one set of rooms for research or into adjacent rooms for clinical care. At each visit, they answer questions on their mood, lifestyle, habits, and the like using a hand-held computer that gets passed on to a nurse who continues entering information in the exam room. Paperless systems like these are “upper-end state-of-the-art” among memory clinics, Cummings said. Incidentally, this is routine in the return of a rental car and many restaurants, showing how general healthcare is still behind in its use of digital records. 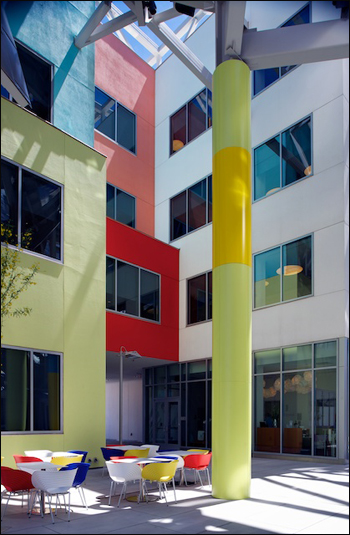 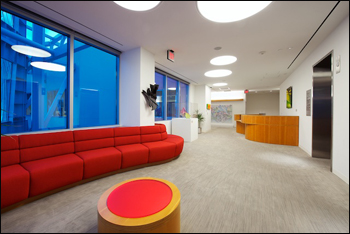 AD patients receive functional and structural MRI imaging on a 3-Tesla scanner according to the Alzheimer’s Disease Neuroimaging Initiative (ADNI) protocol regardless of whether the patients are enrolled in ADNI. This will make their MRI data comparable to the ADNI dataset. The Ruvo Center plans to purchase a positron emission tomography (PET) scanner; in the meantime, patients get their PET imaging at the Nevada Cancer Center.

Ruvo’s father dreaded running into clinic patients with advanced AD while he was still at the early stages of disease, Cummings said. Indeed, seeing where the disease inexorably leads some years down the road is frightening for many patients. For this reason, Gehry designed the four-story center so interaction between patients with mild and severe disease would be minimal, Cummings said. For the most part, patients are escorted straight into their exam rooms. The waiting area has just two chairs.

After finishing their assessments, patients and their families can lounge in “tranquility” rooms—essentially, upscale waiting areas—while the caregivers fill out paperwork and schedule future appointments. The Ruvo Center has designated counsel rooms for families to process difficult news and make decisions.

Other amenities include elevators with rotating art galleries, high-end cuisine served on custom dinnerware at the Maria Puck Café (named after the AD-stricken late mother of celebrity chef Wolfgang Puck), and fresh flowers for all patients as they leave the center. Caregivers can attend weekly Lunch & Learn programs, as well as on-site dance and theater classes. “Our goal is that the patient experience will be one of hospitality, not just a series of clinical assessments,” Cummings said. Similarly, creating a non-clinical, reassuring environment for integrative dementia care is also a hallmark of Cognitive Fitness and Innovative Therapies (CFIT), an independent center that opened in Santa Barbara, California, in 2009 (see ARF related news story; ARF Webinar). One difference is that CFIT focuses more on a holistic approach to preventive and cognitive care, whereas Lou Ruvo focuses on integrating medical care with clinical trials on site.

The approach may be paying off. A hefty 20 to 30 percent of the patients at the Lou Ruvo Center enroll in trials, and have higher retention rates, too, noted Kate Zhong in an e-mail to ARF. Zhong, a geriatric psychiatrist who formerly led global clinical trials for AD therapeutics at AstraZeneca, now directs clinical research and development at the Ruvo Center. “We have a unique system in which the referral intake and screening process are integrated into the clinical practice,” Zhong wrote. “Every patient is potentially a clinical trial candidate.”

At present, the center is the leading recruitment site for patients entering the Phase 3 trial of intravenous immunoglobulin (IVIg), a preparation of human antibodies made by Baxter BioScience. Altogether, center patients participate in 10 ongoing trials for AD or mild cognitive impairment, with another eight or so trials pending or in discussion. In addition, the facility is a site for two ongoing Parkinson’s disease studies—a Phase 3 trial of preladenant (an adenosine A2A receptor antagonist developed by Schering-Plough), and a bike exercise trial for which the Las Vegas center is the sole site.

Beyond conducting clinical trials in a patient-friendly environment, Cummings’ other goal is to make the center a focal point for discussions on novel neurotherapeutics. The number of current trials for many neurodegenerative diseases, such as the tauopathies, for example, is still deplorably small, Cummings said. On this front, the center is trying to invigorate research by bringing academic and industry scientists together with government agencies and advocacy groups to discuss how the sectors can collaborate to move frontotemporal dementia (FTD) compounds more quickly into the clinic. Just last month, the center hosted "Frontotemporal Dementia: The Next Therapeutic Frontier," the first independent meeting of the Frontotemporal Dementia Treatment Study Group. To learn all about that, see Part 2 and Part 3.—Esther Landhuis.

This is Part 1 of a three-part series. See also Part 2 and Part 3. See PDF of entire series.