Induced pluripotent stem cell (iPSC) models are flourishing in disease research. Though researchers cannot use them to study learning and memory the way they would in animal models, these patient-derived cells may illuminate the underlying biology of human disease at the cellular level in a way animals cannot. “By going straight into human cells, the biology more closely reflects what is happening in people,” Rick Livesey, University of Cambridge, UK, told Alzforum. Livesey was one of several researchers who highlighted the latest efforts at developing iPSC lines to advance Alzheimer’s disease (AD)-related research at this year’s Alzheimer’s Association International Conference held 14-19 July in Vancouver, Canada.

Livesey published earlier this year on an iPSC model of Down’s syndrome (DS) developed from patients’ skin cells (see Shi et al., 2012). His team took skin cells from adults with DS and generated iPSCs, which he then induced to become cortical neurons. Those neurons, which were the focus of his presentation, are a relevant model for AD research because almost two-thirds of individuals with DS get dementia by the time they are 50. People with Down’s have an extra chromosome 21, which harbors the amyloid precursor protein (APP) gene, and they develop amyloid plaques and tangles as early as their thirties.

Livesey emphasized that DS neurons take months to develop in a culture dish, about as long as they normally do in situ, meaning they probably take a close-to-natural route. The cells—mostly glutamatergic neurons and some glial cells—also acquire mature firing properties, firing synchronously, and they form synapses with each other. This is important when studying diseases of synaptic dysfunction, said Livesey. The cells display an AD-like phenotype in that they secrete more Aβ40 and Aβ42 than do undifferentiated precursor cells and skin cells. Later, at three months of age, Aβ42 forms aggregates in these neurons, and tau becomes hyperphosphorylated and gets mislocalized into the soma and dendrites.

Recently, Livesey showed the cells’ usefulness as a screening platform. Not only do they thrive in 96-well plates, but they also recapitulate known effects that drugs such as γ- and β-secretase inhibitors show in other cell and animal models. Livesey’s lab is now using these iPSC-derived neurons to screen FDA-approved drugs used in other diseases, since they are already known to be safe for human use, to see if any reduce the AD phenotypes seen in DS. “We all agree that these models need to go from being a proof of concept to actually teaching us new things,” Livesey said. In the future, Livesey plans to delete a gene at a time from chromosome 21 to see which ones rescue which aspect of the cells’ phenotype. He is collaborating with Larry Goldstein, University of California, San Diego, and John Hardy, University College London, to make iPSC models of familial AD and see how similar they are to the DS model.

Also in Vancouver, Alysson Muotri, University of California, San Diego, gave an example of how he has taken the concept of iPSCs for drug discovery a step further—in this case, for autism. Gene sequencing of a patient with sporadic autism revealed that one particular gene—TRPC6—was mutated so that expression of the calcium channel it encodes fell by half. One drug, hyperforin, isolated from the plant St. John’s wort, was already known to bind to TRPC6 and induce calcium influx. In human iPSC-derived TRPC6 mutant neurons, hyperforin stimulated calcium influx. Encouraged by that result, the researchers tried hyperforin treatment in the child whose cells they had collected for the study. While they only have a single time point so far, the child’s father reported improved behavior and the school reported better focus, Muotri claimed. The group will continue to follow that patient. “The coolest part of iPSCs is being able to move from the bench to a translational approach,” said Muotri. “The combination of genomics and iPSC studies is powerful.”

AD cell models are further behind, but researchers are working to catch up. Andrew Sproul of the New York Stem Cell Foundation (NYSCF), New York City, presented on his development of 72 iPSC lines from 12 affected and unaffected members of two families carrying presenilin mutations whose skin cells were collected in the 1980s and were recently reprogrammed into stem cells. The cholinergic cells derived subsequently from these skin cells were electrically active and, just like Livesey’s DS cells, produce more Aβ than do controls. Moving forward, NYSCF is automating the production process and creating a larger number of familial and sporadic iPSC-derived neurons from current patients to aid in the observation of biological disease processes as well as in drug safety and efficacy studies. 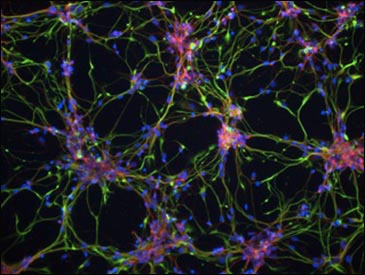 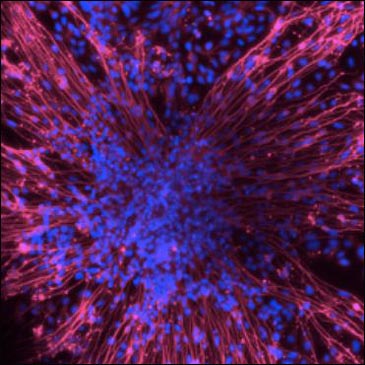 Though iPSC cells hold much promise, they still have a way to go to prove their worth, said Edward Koo, University of California, San Diego, who chaired the stem cell session at which Livesey and Muotri presented. "iPSC technology has not reached its full potential yet,” he told Alzforum; hence, no one can be sure just how valuable these cells will be in furthering AD research. “In what ways they will be better than existing models remains to be seen, but from what we heard today, it's very exciting,” he said.

A recent paper highlights the potential use of iPSCs for drug discovery in other diseases. In the August 1 Science Translational Medicine, Haruhisa Inoue, Kyoto University, Japan, and colleagues report the creation of nine iPSC lines from three familial amyotrophic lateral sclerosis (ALS) patients. Each patient was heterozygous for a deleterious Tar DNA binding protein-43 (TDP-43) allele. First author Naohiro Egawa saw that, as in animal models and postmortem human tissue, motor neurons generated from these cells overexpressed TDP-43 mRNA, had cytosolic aggregates of TDP-43 protein, shortened neurites, and were more vulnerable to agents stressful to cells, such as arsenite, compared to controls.

In the ALS neurons, gene transcription relevant to RNA metabolism was perturbed. For this reason, researchers used the motor neurons to test four potential treatments known to modulate transcription in an arsenite-induced motor neuron death assay. Of those drugs, the histone acetyltransferase inhibitor anacardic acid fixed some of these neurons’ atypical characteristics. The compound quashed TDP-43 mRNA expression, reduced insoluble TDP-43, boosted cell survival in the face of arsenite treatment, and lengthened neurites. Inoue and colleagues will continue to test anacardic acid’s safety and efficacy in other ALS models. Meanwhile, this cell model could be useful for determining the disease’s underlying biology, and might aid in future drug discovery, wrote the authors.—Gwyneth Dickey Zakaib