Calls for functional markers emanated loud and clear from the 3rd Venusberg Meeting on Neuroinflammation, held 28 February-2 March 2013 at the Biomedical Center, University of Bonn, Germany. Markers for brain-resident microglia and infiltrating macrophages, that is. Despite renewed interest in the role of immune cells in Alzheimer's and related diseases, researchers remain hamstrung by difficulties detecting these cells and figuring out what they do in disease. Developing markers for in-vivo imaging has proven particularly vexing. In Venusberg, members of Imaging of Neuroinflammation in Neurodegenerative Diseases (INMiND), a European consortium seeking immune targets for diagnostic and therapeutic applications, reported on potential new tracers. Other researchers lamented that these all bind the same target, a mitochondrial transporter. INMiND principal investigator, Andreas Jacobs, Westfälische Wilhelms-Universität, Münster, Germany, told Alzforum that tracers for other microglial targets, including enzymes and cell surface receptors, are being developed, but no leading contender has yet to emerge.

For decades, researchers have studied glia in vivo by imaging TSPO, a transporter in the outer mitochondrial membrane. PK11195, a ligand developed in the early 1980s, binds this protein with high affinity and has been used to image microglia in a variety of human conditions, including Alzheimer's (see ARF related news story), stroke, viral encephalitis, and more recently to identify inflammation in soldiers who have suffered traumatic brain injury (see Ramlackhansingh et al., 2011). However, the ligand has its drawbacks. "For one, it tells nothing about the nature of microglia, or why they are active," noted INMiND investigator David Brooks, Imperial College London, U.K. PK11195 lacks specificity, poorly penetrates the brain, and has a weak signal-to-noise ratio.

Against this background, researchers in Europe conceived of INMiND to develop probes for microglial imaging and study the basic mechanisms that underscore neuroinflammation. The project grew from a Diagnostic Molecular Imaging (DiMI) project the EU funded from 2005 to 2010. When that ended, Jacobs, together with about 50 of the neuroscience partners from DiMI, applied for fresh EU funds. "The idea was to focus on the microglial aspect of neuroinflammation," Jacobs told Alzforum.

INMiND comprises a collaboration among 20 academic partners in Europe, one in Australia, and seven small to medium private enterprises, said Jacobs. Through its Seventh Framework Programme (FP7), the EU funds the project to the tune of €12 million over five years. An additional €8 million comes from the partner academic institutions in 12 countries.

Jacobs told Alzforum that INMiND will study the earliest stages of disease, focusing on familial Alzheimer's, familial Parkinson's disease, and on patients with mild clinical impairment who test positive for brain amyloid and are at great risk of progressing to Alzheimer’s dementia (see Okello et al., 2009). INMiND investigators are planning a clinical trial to treat MCI patients while following microglial activation with molecular imaging. “We want to see if we can modify plaque load, postpone AD, and tell how microglia are involved in that process,” said Jacobs. The imaging agent has yet to be selected, he said.

Therein lies the challenge. Better imaging agents are emerging ever so slowly. Researchers in France, including INMiND investigator Bertrand Tavitian at the Atomic Energy Commission in Orsay, have developed a new range of TSPO ligands that have better profiles than PK11195, but they also have problems, most notably binding only weakly to people who have certain TSPO isoforms (see ARF related news story). That complicates analysis, said Brooks, because it divides populations into high and low binders. Distinguishing people with AD, for example, from controls then becomes problematic, he said, because high-binder controls take up more of the ligand than low-binder AD patients. Most new TSPO ligands, including DPA-714, and the DAA family of ligands (see Owen et al., 2011) exhibit this differential binding.

Brooks noted that GE-180, a TSPO ligand being developed by GE Healthcare, where Brooks worked previously, shows a better binding profile than PK11195, but so far has only been tested in animal models. Uptake and retention of GE-180 in brain areas that express TSPO compare well with that of other ligands, but it appears to be cleared more rapidly from low-binding regions, improving its signal-to-noise ratio. How this ligand binds to TSPO isoforms remains to be seen.

Researchers at the Venusberg meeting questioned why TSPO continues to be a focus for ligand development. In summing up the meeting, Hugh Perry, University of Southampton, challenged the community to come up with something better. Some researchers said cell surface markers, rather than a mitochondrial transporter, should be more thoroughly investigated. Others noted that new research presented at the meeting has turned up a suite of microglial-specific markers (see ARF related news story) that offer fertile hunting ground for new ligands.

In this vein, Olga Garaschuk, University of Tübingen, Germany, suggested plant lectins. She reported that isolectin B4 binds to microglia when injected into the brains of transgenic mice (Eichhoff et al., 2011). IB4 binding overlapped with green fluorescent protein expression driven by a microglial promoter. It also bound to blood vessels, but Garaschuk did not see that as a major detriment, since vessels and microglia are easily distinguished. Tomato lectin was slightly better (see image below), lighting up tiny microglial processes that IB4 missed (see also Schwendele et al., 2012). 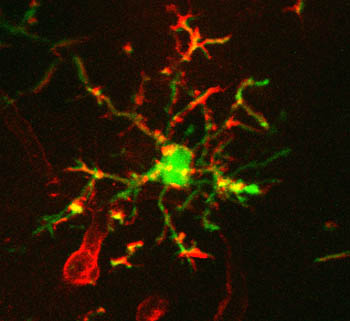 How do lectins work? They have high affinity for sugar coatings, which are rich on microglia. Tomato lectin binds N-acetylglucosamine oligomers, while α-galactose-rich proteins attract IB4. Garaschuk noted that, unlike astroglial marker sulforhodamine 101 that induced long-term potentiation when injected into the brain (for a review, see Garaschuk, 2013), tomato lectin seems to lack biological activity. Microglia also appear fully motile when they bind the ligand.

Brooks noted other non-TSPO targets that might prove useful, including cannabinoid and purinergic receptors. Jacobs said that receptors often make poor targets, suggesting instead that imaging arginase activity might prove useful, as activated microglia upregulate this enzyme. The idea here would be to make a ligand that can be metabolized by arginase into a compound that gets trapped in the cell.—Tom Fagan.