In Alzheimer’s disease drug development, how often does it happen that a large phase 2b trial of an experimental medicine cleanly meets both primary and secondary endpoints as set out in the protocol? Today, at the Alzheimer’s Association International Conference (AAIC) being held July 14-19 2012 in Vancouver, Canada, Dana Hilt of EnVivo Pharmaceuticals in Watertown, Massachusetts, reported that EVP-6124, a small-molecule partial agonist selective for the alpha-7 nicotinic acetylcholine receptor, improved cognition and function in a trial of 409 people with mild-to-moderate Alzheimer’s disease. The trial met seven of its nine endpoints with statistical and clinical significance, with trends on the remaining two. No posthoc statistical maneuvers were necessary to show that people who took the capsules once a day improved over baseline in a dose-dependent fashion.

While the field’s collective eyes are trained on immunotherapy, BACE inhibition, and early-stage trials studded with CSF or imaging markers, symptomatic treatments in mild to moderate AD are languishing in relative obscurity. “Treatments that target receptors in the cholinergic system in particular have been ignored,” commented Lon Schneider of the University of Southern California, Los Angeles. The results reported today suggest that, at least for cognition, the approach may work for patients who already take cholinesterase inhibitors and for those who don’t. The current trial hints, but does not formally show, that the improvement is clinically meaningful to patients; this issue remains to be addressed more extensively in a subsequent trial, Hilt said.

“I would be cautiously optimistic about this agent,” said Jeffrey Cummings of the Cleveland Clinic Lou Ruvo Center for Brain Health in Las Vegas, Nevada. “The trial met its prespecified outcomes and appears to be well conducted. Phase 2 results are not always confirmed in phase 3 but this agent deserves to be advanced.” Cummings is an adviser for EnVivo.

Previous trials in cognitively normal volunteers, people with schizophrenia and Alzheimer patients had suggested that EVP-6124 enhances cognition and acts at lower doses than other compounds targeting the same receptor. For example, an agonist called RG3874 by Roche, which was discontinued in February 2011, was given at doses ranging from 5 to 50 milligrams per day (Mancuso et al., 2011). The trial reported today at AAIC was a dose-ranging study of 0.3, 1, and 2 mg once a day. Empirically, toxicity from pharmaceuticals is rare when given at doses well below 10 mg per day.

The trial sought patients in their 70s whose MMSE fell between 14 and 24 in hopes of detecting a treatment effect at the point in disease progression where patients tend to worsen fastest. Steep decline means a drug effect is easier to measure with standard cognitive batteries, which are less sensitive in very mild than in moderate AD. At baseline, however, the patients ranged quite widely, from a starting MMSE of 11 to a high of 29, meaning the trial did include some very mild patients.

The trial used the ADAS-cog 13 as primary endpoint; the most important secondary endpoint was the CDR-SB as a functional measure. Other secondary endpoints included the ADAS-cog 11, other cognitive tests, the NPI, and the ADCS-ADL as a global measure. In addition, the trial protocol pre-specified analysis with three composite measures developed by John Harrison, a neurospychologist and statistician at Metis Cognition in Kilmington, U.K. These were meant to probe whether the drug exerts specific effects on cognition, memory, or executive function that the broad ADAS-cog collection of tests as a whole might obscure, particularly in earlier-stage patients. 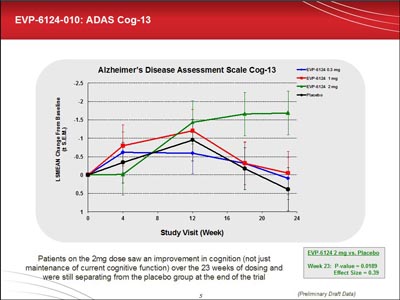 Conducted at 30 sites in the U.S., Russia, Romania, Ukraine, and Serbia, the trial consisted of 60 percent of patients in the U.S. and 40 percent in Eastern Europe. Results were nearly identical between the two continents, Hilt said. The trial used no biomarkers other than plasma EVP-6124 to check whether patients actually took the prescribed pills. Patients were allowed to join regardless of whether they smoked (a habit that affects nicotinic receptors; 8 percent did) or whether they took cholinesterase inhibitors, which do not target the α7 receptor directly but nonetheless influence the cholinergic system. About half of the patients in this Phase 2b trial added EVP-6124 to existing therapy, while the other half took the agonist alone. “We meant for this study to reflect a neurologist’s ‘inbox,’ i.e. include a real-world sample of the kind of patients a neurologist or other clinician would see,” Hilt said.

In Vancouver, Hilt reported that all primary endpoints except for the ADCS-ADL and the MMSE reached statistical and clinical significance in both de novo and add-on patients. This analysis was done in the intent-to-treat population, not only in those who completed treatment. The effect size for the ADAS-cog-13 was 0.39 with a p value of 0.0189, Hilt reported. For the Clinical Dementia Rating-Sum of Boxes, those numbers were 0.341 and 0.0253, respectively. (By comparison, the effect size for cholinesterase inhibitors range between 0.15 and 0.28 depending on the dose.)

The EVP-6124 numbers improved when the scientists analyzed the data with composite endpoints developed to measure specific treatment effects in patients with milder disease, who tend to show little overall decline in 6-months and hence barely move the needle on the ADAS-cog. For the 2 mg group, the cognition composite score was statistically significant at 0.0037, the memory composite at 0.0088 and the executive function composite at 0.0427. Of these three domains, the effect size was highest for cognition at 0.42, confirming again that the drug is primarily a pro-cognitive agent, said Hilt. These analyses, too, were pre-specified in the study’s statistical analysis plan.

The time course of participants’ improvement drew attention at the conference. On the primary outcome, all groups first improved from baseline, probably due to the placebo effect and optimism about being in a therapy trial. All groups stayed together up until 12 weeks; after that, the curves separated. By 23 weeks, the last time point measured, only the 2 mg dose stayed up and apart from placebo. “This is a cautionary finding for Phase 2 studies to run beyond 12 weeks,” Gerhard Koenig of EnVivo told Alzforum.

Importantly, Hilt said, the results showed a graded response with different doses, a feature drug developers want to see. The 0.3 dose was ineffective, the 1 mg dose reached significance on some measures, and the 2 mg dose was most efficacious.

For historical perspective, scientists pointed out that the pivotal trial for approval for donepezil derived its effect size to a larger part than EVP-6124 from a decline in the placebo group, with the treatment group improving approximately by 0.5 points over baseline. In contrast, in the EVP-6124 trial the placebo group hardly declined over 6 months, which has become typical as milder patients are increasingly entering trials. Instead the drug-placebo difference arose from 1.9 point improvement of the 2 mg group over baseline.

The clinical dementia rating sum of boxes, a functional measure, showed a dose effect. By comparison, the cholinesterase inhibitor donepezil had no effect on this measure in its pivotal trial. The CDR-SOB measure is increasingly widely used in clinical trials, though it is not established yet as an outcome the FDA will accept as a basis for approval. For that purpose, the ADCS-ADL is a more accepted endpoint. It trended in the right direction with a 0.2 effect but missed statistical significance in this trial. 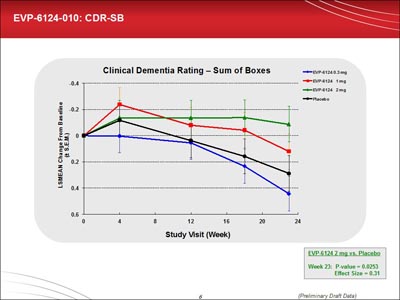 On safety, Hilt reported that the drug is safe and well tolerated. Mild nausea and constipation did occur in all groups and more so in the treatment groups. Analysis of the adverse effects in the various groups – people on acetylcholinesterase inhibitors, people on EVP-6124, people on both drugs, aged controls on placebo – suggested that taking a cholinesterase inhibitor alone cause more gastrointestinal trouble than taking the alpha 7 agonist. Adding the agonist to donepezil or rivastigmine did increase the incidence of these side effects. Four percent of placebo patients and 7 percent of 2 mg EVP-6124 patients reported these side effects. Very few of these led to dropout and most resolved on their own, Hilt said. In essence, the scientists claimed, EVP-6124 appears more tolerable than current therapy. Previous trials in a younger population with schizophrenia caused no adverse events at all, Koenig noted. Eighty percent of participants completed the trial, and there was no difference in the fraction completing in the different treatment groups.

The next challenge lies in demonstrating what the cognitive improvement means for the patient, Koenig said. “This drug safely improves cognition. This much I can say, as it’s been shown consistently in all trials we conducted. But we need to do more work to be able to show formally how this matters for the patient.” A longer Phase 3 trial perhaps testing a higher dose will start in 2013. It will experiment with patient-reported outcomes and additional measures to address whether this drug is clinically meaningful for patients. EVP-6124 sensitizes the receptor to acetylcholine rather than stimulating it directly. For details on the drug’s mechanism of action, see prior prior ARF news story.—Gabrielle Strobel.