The mechanistic prodding and probing of γ-secretase would be much easier if only one could plainly see the thing. But to this day, the beast defies X-ray crystallographers trying to inspect its atomic structure. In the meantime, electron microscopists are edging ever closer to sneak better views. At the 8th Eibsee Meeting on Cellular Mechanisms of Alzheimer’s Disease held October 29 to November 1 in Germany, Huilin Li of Brookhaven National Laboratories on Long Island, New York, unveiled a second-generation EM image. It replaces a lower-resolution (15 Angstrom) EM picture derived with a negative staining technique with a new, slightly sharper one obtained with cryoelectron microscopy. CryoEM is considered superior for structural studies because it requires no contrast agents, hence affords a more “natural” view of the subject of interest.

The first structure (see Eibsee 2006 story), like the new one, came out of an ongoing collaboration Li has with Dennis Selkoe’s group at Brigham and Women’s Hospital in Boston. To move toward cryoEM, the researchers initially focused on obtaining a more concentrated and highly pure preparation of active human γ-secretase (Cacquevel et al., 2008). In the process of analyzing this preparation by scanning transmission EM, the collaborators, with co-first author Pam Osenkowski, confirmed recent work (Sato et al., 2007) demonstrating that γ-secretase occurs as a single complex containing each component once. The weight of each component plus that of the digitonin detergent added up to the 230 kD measured for the complex, Li reported at the Eibsee. Together, this appeared in the mind of the conference participants to settle previous questions of whether γ-secretase might contain two presenilins (Schroeter et al., 2003).

Li then noted that their next goal—seeing γ-secretase on cryoEM preparations—was technically challenging, consuming many months of effort. But eventually, co-first author Hua Li succeeded. 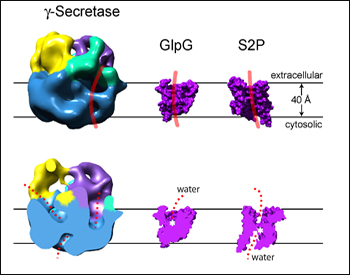 The new structure resolves the three-dimensional features of γ-secretase at 12 Angstroms. Globular and some 8.5 nm across, the enzyme at first glance looks simple and smooth on the cytosolic side and bumpier, busier on the extracellular side. It differs importantly from the first structure in that it no longer shows an inner chamber that reaches all the way through the membrane. This feature on the previous structure had inspired puzzled discussion of how pore- or proteasome-like features of γ-secretase could maintain the cell’s membrane potential. Instead of the hollow tunnel, the new cryoEM pictures show cavities that reach quite deep into the membrane from either side but do not connect. Overall, the new structure looks less like a channel and more like a protease, said Li.

The structure shows a groove across the membrane region that could be the proposed lateral gate through which the substrate slips on its way to the active site. It also shows various dents where water could enter to support the hydrolysis reactions the enzyme carries out within the hydrophobic environment of the membrane (Li et al., 2008).

Other γ-secretase topics discussed at the conference included the in-vivo relevance of new cell-based findings by Jochen Walter’s group at the University of Bonn, Germany. Walter’s recent work using cultured wild-type, presenilin knockout, and transgenic cells suggests that γ-secretase might regulate cholesterol metabolism in neurons through LDL receptor-mediated uptake of lipoprotein particles (see Tamboli et al., 2008). Golde noted that one way to take such in-vitro findings into humans could be to measure their proposed consequences, for example, markers of cholesterol metabolism and ApoE levels, in people with autosomal-dominant FAD mutations (see DIAN study).—Gabrielle Strobel.