The tangled protein tau does not stand alone in aggregates. In people with Alzheimer’s and AD model mice, tau appears to have a partner in EF Hand 2 (EFhd2), according to work presented by the laboratory of Irving Vega, of the University of Puerto Rico in Rio Piedras, at the Keystone Symposium "New Frontiers in Neurodegenerative Disease Research," held 4-7 February 2013 in Santa Fe, New Mexico. Yancy Ferrer-Acosta reported on results from her recent publication in the January 18 Journal of Neurochemistry online, in which she found that EFhd2 forms fibrils in vitro and granules in brain tissue from people with Alzheimer’s. EFhd2 behaves like an amyloid, she concluded. And like its binding partner tau, EFhd2 undergoes phosphorylation by the Cdk5/p25 complex, as Edwin Vázquez-Rosa described in another poster. Finally, in an effort to understand EFhd2’s normal role, Eva Rodríguez-Cruz in the lab is closely watching the development of EFhd2 knockout mice. They have not yet shown a phenotype, but may do so with age, she reported at the meeting.

"[Irving] has done a very interesting series of studies in human AD and tauopathy mouse models which I think justifies his conclusions that … EF Hand 2 is a novel amyloid protein associated with tau," commented John Trojanowski of the University of Pennsylvania, Philadelphia, in an e-mail to Alzforum. However, Trojanowski cautioned that tau tangles trap many bystander proteins, so subsequent research should determine if EFhd2’s association with tau contributes to neurodegeneration.

Vega has been studying EFhd2 since 2008, when he discovered it coimmunoprecipitated with tau isolated from the brains of JNPL3 tauopathy model mice. EFhd2 appeared throughout the body, with the highest levels in the brain. It associated with tau only in aging, sickly animals, not in young or healthy ones, and Vega found the same tau-EFhd2 partnership in brain tissue samples from people who had AD (Vega et al., 2008).

In her poster and recent paper, Ferrer-Acosta explored EFhd2’s propensity to aggregate. "So far, this protein seems to have all the characteristics of a new amyloid protein," she said. In brain slices from people who died of AD, EFhd2 appeared in inclusions both on its own and with tau. In vitro, it formed filamentous structures that associated with the amyloid marker thioflavin S. The coiled-coil domain, she found, participated in the EFhd2 oligomerization as well as tau-EFhd2 interactions.

Because intracellular calcium levels may rise during neurodegeneration, the researchers hypothesized that in the case of disease, excess calcium might bind to EFhd2, causing it to aggregate with tau. However, in-vitro experiments contradicted this theory. In fact, the team found that including calcium in the reaction reduced EFhd2’s formation of thioflavin S binding amyloids. Thus, Vega proposed that calcium binding stabilizes EFhd2 in its proper, physiological form. The less stable version without calcium, then, would be the pathogenic one. 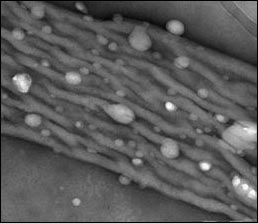 What prevents intracellular calcium from interacting with EFhd2 in the disease state? The work presented by Vázquez-Rosa may provide an answer. He reported that, like tau, EFhd2 is a substrate for the Cdk5/p25 kinase complex. Cdk5/p25 attaches a single phosphate to EFhd2, at serine 74, in vitro. The same event occurred in brain extracts from JNPL3 mice. It also interfered with calcium binding, Vega said. Thus, the Cdk5/p25 hyperactivity associated with neurodegeneration might prevent EFhd2 from picking up calcium, pushing the protein away from its stable, physiological shape towards a more unstructured, pathological form likely to aggregate. Vega noted that at this point, the data do not indicate whether EFhd2 amyloids are toxic or protective to cells. The EFhd2 structures might act on their own, or promote tau tangle formation, he speculated.

Rodríguez-Cruz will address the question of EFhd2 loss of function with her knockout mice. The animals, she hopes, will also offer some clues as to EFhd2’s normal function. The oldest mice are at 32 weeks, and she has not yet observed problems with basic brain structure or behavior. In a cage full of animals, it is impossible to tell which are the knockouts and which are wild-type, she said. The researchers can conclude the protein is not essential.

Rodríguez-Cruz and Vega hope that the animals will start to show pathology as they age to perhaps a year or 18 months. If EFhd2 is normally protective, then the researchers predict the knockouts will age faster, Vega said. They also plan to cross their EFhd2 knockouts with the JNPL3 tau mutant strain to see if loss of EFhd2 enhances or rescues the tau pathology.

To address the role of EFhd2 in human disease, Vega is collecting brain samples representing tauopathies and other forms of neurodegeneration. He is eagerly awaiting production of an antibody specific for phosphorylated EFhd2, to examine the phosphorylation state of the protein in human samples. In addition, Vega hopes to start screening DNA samples from people with AD or other conditions for EFhd2 mutations. A few genetic variants in the gene show up in single nucleotide polymorphism databases, he said, but he does not know if those donors exhibited symptoms of neurodegeneration. In addition, Ferrer-Acosta noted that studies in the AlzGene database have linked the region including EFhd2 to late-onset AD (Hiltunen et al., 2001, and Holmans et al., 2005; see also Myers et al., 2002, and Bertram et al., 2007). "These studies suggest that EF Hand 2 may be a risk factor for the development of AD in humans," she wrote in an e-mail to Alzforum.

EFhd2 has received little attention, but Vega hopes that the new paper will help initiate discussion on this and potentially other amyloids beyond the standard-bearers tau and amyloid-β. "There is still a lot to be learned about how tau participates in Alzheimer’s disease," added Sarah Fontaine of the University of South Florida, who was not involved in the study. "There may be more tau-associated proteins which can contribute to the pathology." New tau partners might make good drug targets, she said.—Amber Dance