First, it was bicycles. Now, it’s magnetic resonance imagers. A dual-head functional magnetic resonance (fMRI) detection system developed by Ray Lee of Princeton University in New Jersey is the first to allow brain imaging of two people lying side by side in a single scanner. Lee presented some preliminary results at this year's Society for Neuroscience conference held 12-16 November in Washington, DC. The formidable instrument has turned up synchronized oscillations among certain brain areas—a buzz that happens only during social interaction. Which specific regions are coupled depends on the relationship between the two people being scanned and on the task they perform. The device could help researchers figure out how two brains interact with one another and what goes awry in the brains of people with social disorders.

Previous studies have attempted to get at the neural roots of social interaction by connecting two people in individual scanners via the Internet (see Montague et al., 2002) or by video conferencing (see Redcay et al., 2010). Data showed that regions such as the medial prefrontal cortex, the temporoparietal junction, and the anterior cingulate cortex are active when people communicate. But none of these studies captured an actual interaction between two people, said Lee; the interactions were only simulated. His device, which fits neatly inside any commercial MRI machine, contains two separate radiofrequency coils. The twin coils simultaneously pick up and transmit separate signals from both brains, allowing two people to be imaged while they directly interact in an fMRI scanner.

The twin coils surround each of two study participants’ heads. Subjects lie on their sides facing each other and make eye contact through a small transparent window between the two coils (see image below). Both keep their eyes open to steadily meet each other’s gaze or, as a control, alternately open and close their eyes so as not to make eye contact. 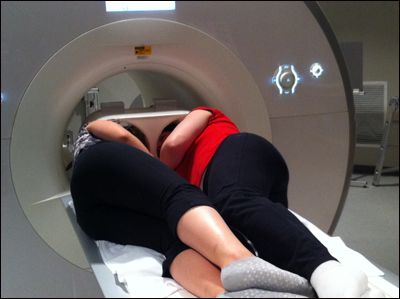 Scanner Made for Two
A twin-coil device accommodates a pair of volunteers in an MRI machine. The coils simultaneously pick up and transmit individual signals from each brain, allowing imaging of direct interactions, such as when the individuals gaze at each other through a small window. Image credit: Ray Lee

The study included 18 pairs of individuals—four romantically involved couples, 12 platonic female pairs and two male pairs. Lee found that between friends, the basal ganglia synchronize, meaning that the cells of that brain region oscillate together at the same rate. Between lovers, it’s the posterior cingulate cortex. In a separate experiment, one person gently touched the other. In that case, Lee found that the toucher’s motor and somatosensory cortex was coupled to the other person’s superior temporal sulcus and somatosensory cortex.

“This is direct evidence for how two people are communicating with each other—how their brains are synchronized,” said Lee. He suggested this new tool could help researchers uncover changes in brain coupling that underlie social disorders such as autism. The benefit for neurodegenerative disease research is not immediately clear. Conceivably, scientists could one day use the apparatus to understand why patients with Alzheimer’s disease stop recognizing friends, children, and spouses, or why people with frontotemporal dementia lose the ability to respond appropriately to social cues, Lee added. However, getting an AD patient that far advanced, or FTD patients, to lie in a scanner with someone else might be challenging. In addition, given the newfound synchronicity of basal ganglia in social interaction, his team is already thinking there may be some implications for Parkinson’s disease. Lee told ARF that motor symptoms worsen in people with PD when they are in certain social situations.

Despite the movement constraints inside an MRI scanner, the spatial resolution of this technique is much better than that of electroencephalography methods typically used to measure social interaction, said Joanna Saenger of the Max Planck Institute for Human Development in Berlin, Germany. The temporal resolution for EEG is superior to that of MRI. Even so, scientists will be able to use this new twin-coil device to help more precisely pinpoint individual brain regions that are associated with social interaction, she added.—Gwyneth Dickey Zakaib.