In a place where yachts sit jammed side by side in the harbor like so many gilded peas in a pod, a marine metaphor seems fitting. Held 29-31 October in the Principality of Monaco, the 5th Clinical Trials in Alzheimer’s Disease (CTAD) conference showcased a field trying to steer therapy development out of the doldrums of the past decade and into swifter waters. Organized by Bruno Vellas of the University of Toulouse, Jacques Touchon of Montpellier University Hospital, with Paul Aisen of the University of California, San Diego, and Mike Weiner of the University of California, San Francisco, the conference drew a record 660 attendees from around the world to this city-state nestled against a hilly spit of land along the French Riviera. CTAD has become a magnet for scientists spanning the waterfront of AD therapy development, from preclinical to regulatory science.

Calling on researchers to make a difference in this disease, Prince Albert II of Monaco greeted attendees in the principality’s Oceanographic Museum, perched grandly on a promontory overlooking the Mediterranean Sea. 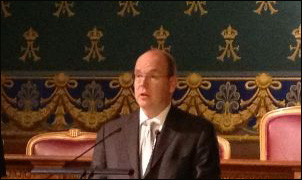 In Monaco, the main buzz of conversation was about news from the ongoing analyses of intravenous bapineuzumab and solanezumab. These two anti-amyloid antibodies missed their primary endpoints in Phase 3, sinking the former, but an apparent cognitive benefit gave a second wind to the latter. Researchers continue to plumb the depths of the data generated by these trials for a better understanding of how biomarker changes align with safety and efficacy signals (see Part 2 of this series). “These datasets are very large, and have more to tell us yet,” Aisen said.

Beyond these trials, CTAD made clear that the field has tacked toward conducting trials at the prodromal, even presymptomatic, stages of disease, and is working to tighten the tools and designs necessary to do that. “We all agree by now that earlier intervention is a key strategy for success,” said Chris van Dyck of Yale University in New Haven, Connecticut.

The conference program kicked off with a keynote session on regulatory science. Cristina Sampaio, a neurologist who recently left the European Medicines Agency (EMA) to work for CHDI in Princeton, New Jersey, took stock of changes at the EMA over the past five years that have set the stage for new types of trials. She singled out the introduction of research diagnostic criteria that added specificity to the prevailing concept of mild cognitive impairment (Dubois et al., 2007). “For us, the MCI criteria of 1999 were too ill defined to represent a licensable entity. The International Working Group research criteria were closer to the disease and made it possible for us to move. We started to accept trials that use these criteria for inclusion in 2009,” Sampaio said. Those criteria combine a mild but measurable memory impairment with a biomarker change. The subsequently revised U.S. criteria (Albert et al., 2011) “are fine as well,” said Karl Broich of the German Federal Institute of Drugs and Medical Devices in Bonn, and the EMA (for more on regulatory science at CTAD, see Part 3).

Implementing these new criteria is no picnic, however. Van Dyck offered a reality check in his update on therapeutic trials that have since used them. Examples include Phase 2 trials of Bristol-Myers Squibb’s γ-secretase inhibitor avagacestat and of Pfizer-Janssen's AIP active immunization ACC-001, as well as a Phase 2/3 trial of Roche’s antibody gantenerumab. Details vary, but each trial essentially recruits for prodromal/predementia AD, aka MCI due to AD, by looking for people who have both measurable memory loss and either an AD signature in CSF or brain amyloid as measured by PET. The problem? It’s a hard slog for the trial sites to find those patients. In the avagacestat trial, 1,350 candidates had to be taken through informed consent and screened to obtain 550 who met criteria for amnestic MCI. Those underwent a lumbar puncture, and 48 percent met the cutoff for AD pathology. In toto, 81 percent failed screening, van Dyck told the audience. The clinical exclusion criteria, including the memory cutoff, thus contributed even more to screen failures than did the CSF threshold. Similarly, in the ACC-001 trial, many failed cognitive testing, and about half of those who made it through met the biomarker criterion.

Site investigators elsewhere in the U.S. and in Europe confirmed that recruitment for prodromal trials has been tough going. They urged that biomarker cutoffs and methods for determining PET positivity be set with great care, as the sites are seeing many near misses around those thresholds. “Think about the person right on the cutoff line who gets a call from me, the site PI. What do I say? ‘The bad news is you are not eligible for this study, and the good news is you are not eligible for this study’,” Van Dyck said, “This highlights that we are making dichotomous decisions about continuous variables that are fully distributed. We need to study this further.”

Sometimes a patient who fails the biomarker component clearly seems to have very early AD, said Steve Salloway of Brown University in Providence, Rhode Island. Other site leaders noted that, once eager patients have undergone an invasive procedure, telling them they are ineligible becomes a more regretful conversation between patients and their physicians.

Those woes aside, enriching trials in this way is feasible. Two of the three trials mentioned here are fully enrolled. Their recruitment has shown high concordance between CSF and amyloid PET, meaning they are largely interchangeable, van Dyck said. Gantenerumab is enrolling. Phase 1 and 2 trials of additional drugs, such as Eisai’s and Lilly’s BACE inhibitors (see ARF Vancouver story), the new monoclonal antibody BIIB037 by Biogen, and an upcoming adaptive trial of the protofibril antibody BAN2401 by Eisai BioArctic (see Part 4 of this series) are using either CSF or amyloid PET as part of their inclusion criteria as well.

“These studies are essential. We have to do this,” van Dyck said. He added that consistent diagnostic guidelines across studies, and more cost-effective biomarkers, would make the process more efficient for the participating sites. Even as enrichment trials work out their growing pains, observational studies further substantiate the case for testing therapies in people who are on their way to develop AD dementia. Examples include AIBL and ADNI, as well as a Swedish cohort study that recently reported nine-year follow-up data (see Buchhave et al., 2012).

Besides Enrichment, What Else Is New?
The trial failures of the past decade offer ample learning opportunities. This topic bubbled up in sessions throughout the conference. For example, Lon Schneider noted that trials would be well advised to find ways to sample their participants on outcomes more frequently than is currently done. Data points on most outcome measures have swung widely in recent trials; too few data points can elevate outliers and mask an overall trajectory. “As a result of infrequent testing, we miss drug effects,” Schneider said. He further recommended establishing run-in data before starting the treatment phase of a trial.

CTAD saw extensive discussion of cognitive outcome measures. Besides being brief, such tests should reflect the expected mechanism of action of the drug, Schneider said. He cautioned against using composites in which some tests have practice effects, as those may hide a drug response indicated by other tests in the mix. In fact, Keith Wesnes, of United BioSource Corporation, Goring-on-Thames, U.K., reported at CTAD that half of the cognitive tests used in ADNI showed practice effects. The list includes the Boston Naming and Trail Making tests, and others. ADNI-1 controls improved over six years’ time on those tests, even though prior research has established that cognitive function wanes with age; hence, the controls should have declined. In essence, Wesnes said that tests with practice effects show a longitudinal element, i.e., worse performance with age, when given once to people of different ages. When given repeatedly, as in ADNI, the practice effect can mask age-related decline.

The effect size of this "training" was in the range of that seen with acetylcholinesterase inhibitor drugs, hence, may swallow up small drug effects in clinical trials. The training effect calls the value of these tests in clinical trials into question, Wesnes claimed. “These tests are useful for cross-sectional use in longitudinal natural history studies; they are not suitable for drug studies in preclinical AD,” he said. Practice effects have been shown before (e.g., Wilson et al., 2002).

What about the most commonly used cognitive battery, the ADAS-cog? Schneider called it a "utility infielder," that is, a perfectly respectable, albeit overplayed, generalist. “It is used automatically whenever we test a drug. Whether Phase 2, Phase 3, no matter what the drug is,” Schneider said. Expectations have slid from a three-point ADAS-cog improvement in six months with the symptomatic drugs of the 1990s to “we’d be happy if we saw any improvement over 18 months,” Schneider said. “We should not continue to rely on it to advance drugs from Phase 2 to 3.”

On a separate note, Schneider advised against enriching Phase 3 trials for ApoE4 subsequent to analyzing Phase 2 trials by ApoE genotype. Rosiglitazone and bapineuzumab are two examples where analysis of Phase 2 data indicated a different drug response in ApoE4 carriers than non-carriers, but subsequent pharmacogenomic Phase 3 programs failed. Studies have shown that ApoE4 and CSF Aβ or brain amyloid are closely linked; glucose metabolism and connectivity change earlier in carriers than non-carriers as well. In ADNI, 89 percent of people with MCI due to AD who carried an ApoE4 allele had a positive CSF Aβ biomarker. Schneider’s argument against testing drugs separately in clinical trial samples enriched by ApoE4 status is that carriers essentially have more advanced disease than non-carriers, not necessarily a qualitatively different type of AD that would predict a different drug response.

To study enrichment by ApoE status, Schneider, with Richard Kennedy and Gary Cutter at the University of Alabama, Birmingham, simulated running trials in various samples ranging from all ApoE4 carriers to no ApoE4 carriers in a database of placebo data from 18 pooled ADCS trials. They found no differences in the trials’ efficiencies. This leads to the contrarian conclusion that selecting prodromal AD patients for a trial based on CSF Aβ42 or ApoE4 status may identify more advanced cases of MCI, but not necessarily enhance statistical power. As trials are adding genetics or evidence of amyloid to their inclusion criteria, it might be preferable at this point to use these markers as an explanatory variable, not to stratify by ApoE status or to exclude people based on their CSF Aβ42, Schneider suggested. These findings are consistent with van Dyck’s report that only 19 percent of potential MCI patients are severe enough, with both memory impairment and biomarker positivity, to be included in prodromal AD trials, Schneider wrote to Alzforum.

Many trials enroll a wide age range, typically from 55 to 90 years. This practice may be democratic but hazardous to the outcome, according to Dominic Holland of the University of California, San Diego. Holland studied how age affects disease progression in ADNI. He found that cognitive decline and atrophy tend to slow with advanced age in people who have MCI or AD, while, on the contrary, this decline speeds up with age in healthy controls. This implies that it is difficult to distinguish AD from normal aging in the oldest old, and that including very old people in a trial reduces statistical power. Younger cohorts with a tighter age range might better enable trials to measure drug effects, whereas studies in older people could help confirm safety and tolerability of a therapy, Holland said (Holland et al., 2012). Alas, a large proportion of dementia prevalence occurs in people older than 80 (Brayne and Davis, 2012).—Gabrielle Strobel.