At the 5th Clinical Trials in Alzheimer’s Disease conference held 29-31 October in Monaco, six talks covered "regulatory science." Call it "soft" if you will, but this interface between science and the regulatory process is becoming an integral part of Alzheimer’s therapy development as more researchers wade into the uncharted waters of evaluating drugs in the disease stages before dementia. Regulatory science drives governmental health, legislative, and judicial decisions. As this discipline is becoming more active, transparent, and collaborative among agencies and outside groups in the Alzheimer’s field, it is gaining visibility, and researchers increasingly consider it important to understand. Here is a digest of what the health authorities and their partners on both sides of the Atlantic had to say.

Cristina Sampaio spent 13 years at the European Medicines Agency before moving earlier this year to CHDI in Princeton, New Jersey. She told the audience that in the past five years, work at the EMA was marked by a shift away from the standard model of drug evaluation in Alzheimer’s. In particular, the revision in both Europe and the U.S. of consensus diagnostic criteria set the stage for the EMA to facilitate its incorporation into clinical trials. Since then, the agency has issued three opinions on qualifying biomarkers for enrichment of clinical trial populations. In February 2011, the EMA gave a first nod to CSF biomarkers with its draft opinion that a pathological signature based on low Aβ42 and high tau was acceptable for identifying prodromal-stage patients who are at risk to develop Alzheimer’s dementia for inclusion in trials. In October 2011, the EMA issued a draft opinion on using hippocampal volume to enrich trials (see ARF related news story). In January 2012, the final positive opinion on volumetric MRI followed. In February 2012, the EMA issued a qualification opinion for amyloid PET as a biomarker to enrich predementia trials.

Each of these opinions followed a systematic review of data, rounds of intense discussion, and a public comment period, said Remy Cahn, a regulatory scientist at Bristol-Myers Squibb in Rueil, France.

On 12 October 2012, the EMA recommended that florbetapir be licensed for clinical use; a final decision by the European Commission is pending. Qualification for enrichment and licensing for clinical use are different processes, Cahn said. For example, qualification is independent of the particular product used, whereas licensing is specific to the product.

The EMA and the FDA do this work in an ongoing dialogue with non-governmental organizations such as the ACT-AD umbrella coalition of advocacy groups involving in issues of aging, and CAMD, the Alzheimer’s/Parkinson’s consortium of the Critical Path Institute based in Phoenix, Arizona (see ARF related news story).

This pace is not fast enough for some. “For industry to continue to make investments, there needs to be greater predictability and regulatory certainty on how products will be judged. Without that we will lose the support needed to see through the next generation of therapies,” said Dan Perry, who chairs ACT-AD. 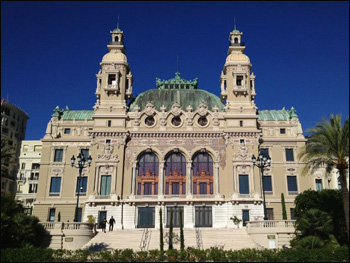 Monte Carlo's Casino, located 800 feet from the CTAD site. NGOs such as ACT-AD are working with regulators in hopes of making drug development less of a gamble for patients and companies. Image courtesy of Gabrielle Strobel

No new AD therapeutics have been approved in nearly a decade. Sampaio said that besides metrifonate, the EMA had not actually turned down a single new AD drug application in that time. The reason for the drought is that, after memantine’s approval in 2005, companies submitted no more applications. With the prevailing investigational compounds and trial designs at the time, no Phase 3 program achieved enough success to even come before the regulators and ask for marketing authorization. Most of the EMA’s licensing work concerned labeling extensions, safety issues such as mortality of antipsychotics in AD, formulations, and generics.

“The real action in my time at the EMA was in the scientific advice working party,” said Sampaio. Besides dealing with the investigational drugs that ultimately failed these past 10 years, the working party laid the groundwork for a wave of different trials that is now starting to take hold. “Both the EMA and the FDA are committed to using good science,” Sampaio said. “The principles we developed are likely to facilitate the next generation of successful medicinal products.”

Besides the diagnostic criteria, the second key factor driving change at the EMA was that the working party took up the issue of prevention trials in AD. “Presymptomatic carriers were never discussed at EMA until we set up a workshop in 2010. This was important. Rusty Katz and colleagues from FDA were there by video. Both sides endorsed the goal of presymptomatic trials, and the discussion has been going in a very positive mode since then,” Sampaio said (see ARF related series). Preclinical trials have become an engine of change in the field, as the DIAN, API, and ADCS A4 trials are gearing up.

For his part, Rusty Katz of the U.S. Food and Drug Administration addressed CTAD once again by video. Katz said that the agency may apply different rules to different populations. That is because presymptomatic patients with inherited Mendelian mutations will all become symptomatic, whereas that is not known to be true for ApoE4 carriers or A4 participants. At the moment, the FDA is not ready to accept that an effect in ADAD can be extrapolated to sporadic AD, though Katz said this may change with more data.

What does this distinction mean in practice? For one, the safety bar will be lower for autosomal-dominant AD than for LOAD. The FDA does not take the view that a drug to treat asymptomatic patients must be completely safe. The agency is prepared to accept risk from a drug that works. “We stand ready to look at drugs that have toxicity if they have a significant effect in delaying cognitive decline in AD,” Katz said. This effect can be symptomatic or disease modifying. Going a step further, Katz said that even though the FDA encourages enrichment to enroll mostly patients who truly have AD and will become symptomatic, the FDA does not require an absolutely benign safety profile even for those trials that contain some proportion of patients who may not get AD during the course of the trial.

For another, the FDA’s distinction between autosomal-dominant AD and more common forms of the disease means that the former is a valid indication by itself. The FDA would consider granting an indication for a drug developed entirely in this small population, Katz said. For other risk factors such as ApoE, this is not the case.

The challenge for scientists lies in being able to tell if the drug is useful in patients who have no symptoms. “That is the paramount question,” Katz said. The answer hinges on the outcome measures. On that, Katz reiterated that the FDA has always insisted on evidence that the drug effect is meaningful to the patient. “It does not matter to the patient if (s)he remembers one more word on a list,” Katz said. He acknowledged that showing global functional change is very difficult in patients who have no symptoms. “The whole concept of clinically meaningful change has to be reconsidered for preclinical trials,” Katz said.

Scientists are increasingly finding that preclinical patients do have subtle cognitive changes on sensitive tests. Together with a surrogate marker, improvement on such tests could be sufficient. "We are not entirely there yet, but have told sponsors that if they show a result on a cognitive marker and a surrogate marker, we will at least consider a claim,” Katz said. The CTAD conference is not the first occasion Katz made this statement, but it is worth repeating because it constitutes a significant departure from the FDA’s previous position insisting on co-primary cognitive/global outcomes. On 5 November 2012, the FDA and the Coalition Against Major Diseases (see below) jointly hosted a workshop at the FDA campus outside Washington, DC, where Katz and others at the FDA, as well as the EMA, academia, industry, and other groups discussed what might constitute suitable cognitive outcomes in predementia trials.

In addition, the FDA wants AD trialists to begin using adaptive designs, and some are starting (see Part 4 of this series). Katz cautioned trial designers to be wary of type 1 error, i.e., a false-positive finding. Specifically, Katz recommended using early biomarkers adaptively to determine the future conduct of the study, for example, which of many initial doses to take forward, but to steer clear of adapting the outcome partway into the trial.

Karl Broich of the Federal Institute for Drugs and Medical Devices in Bonn, Germany, co-leads EMA’s scientific working party on AD. The working party reports to the Committee for Medicinal Products for Human Use (CHMP). “FDA’s and EMA’s positions are not far away from each other. Both agencies have moved,” Broich said. Both agencies need evidence that a surrogate marker predicts a subsequent clinical outcome. That said, in light of both the urgency of the Alzheimer’s problem and how difficult it is to validate a surrogate endpoint to published standards (Bucher et al., 1999), the EMA may not actually insist on full validation in the end, Broich said. As a case in point, Broich noted that the CHMP had cut the scientific community some slack in its recommendation, issued on 18 October 2012, to authorize florbetapir/Amyvid for clinical use. “We usually require more of a diagnostic,” Broich said.

Broich called on trialists in the audience to avail themselves of CHMP’s scientific advice working party from the get-go, and in this way avoid surprises late in the process.

Historically, the path to persuade regulatory agencies to accept a biomarker was costly and cumbersome, as each company needed to advance, on its own, the marker it wanted to use. Sometimes an agency would require co-development of a drug and a biomarker in parallel, a high bar in many instances. Each agency dealt with each company’s proposed markers case by case, and each marker was accepted over time. This started to change when the EMA began to lead the way in qualifying a biomarker for the entire field, said Diane Stephenson of the Coalition Against Major Diseases. CAMD engages a broad base of scientists from governments, industry, patient groups, and academia to build shared drug development tools. Besides helping push biomarkers out of the exploratory stage, CAMD has engaged nine pharmaceutical companies to pool data from 22 treatment trials, map these disparate data to a common CDISK data standard, and make it into an open database of aggregated clinical data. From that, CAMD built an in-silico, quantitative tool to model disease progression and drug response in a therapeutic trial setting, which is currently under FDA review. Stephenson hopes to further expand the precompetitive space for all trialists in the field by way of sharing more clinical trial data.

Stephenson urged that the EMA and FDA work toward issuing qualification opinions together. This would streamline the rules by which companies conduct their increasingly international trials. “This is a lofty goal, but given the fact that we do communicate across agencies, it is possible,” Stephenson said.—Gabrielle Strobel.