One way to get the lowdown on someone is to check out the person’s closest friends and colleagues. Similarly, some Alzheimer disease researchers are teasing out the biological function of amyloid precursor protein (APP) by studying “whom” it associates with, and puzzling out what these partners might be doing in neurons. In a plenary talk at the International Conference on Alzheimer’s Disease (ICAD) held last month in Chicago, Joseph Buxbaum of Mount Sinai School of Medicine in New York presented new data suggesting that an APP interactor, Fe65, associates with teashirt (a zinc-finger transcription factor) and SET (a histone acetyltransferase inhibitor) to form a gene-silencing complex that binds caspase-4. In the study, AD appears linked with higher RNA levels of caspase-4 and decreased expression of Fe65 and teashirt, raising the intriguing possibility that APP processing could impinge on transcriptional regulation of an inflammatory caspase. Well-known for their role in apoptosis, some caspases, including caspase-4, also play a role in the maturation of cytokines that mediate inflammation (for reviews, see Nadiri et al., 2006 and Martinon and Tschopp, 2007), a process linked to AD in beneficial and harmful ways (for a recent example, see ARF related news story). Another study at ICAD—presented on a poster from the lab of Ulrike Müller at the University of Heidelberg in Germany—addressed APP’s physiological function using a different approach. Müller’s group studied the role of individual APP proteolytic fragments in mice lacking full-length APP and related family members.

Infamous as the cell-surface protein that gets snipped to form the Aβ peptides gumming up the brains of AD patients, APP has physiological functions about which comparatively little is known. Clues surfaced when an earlier study (Cao and Südhof, 2001) suggested that the APP cleavage product containing its cytoplasmic tail (aka AICD, or APP intracellular domain) may play a role in transcriptional activation by stably associating with the adaptor protein Fe65, and Tip60, a histone acetyltransferase (see ARF related news story). A number of candidate gene targets for this complex have subsequently been identified, but no such gene has since received broad-based replication and consensus, leaving the issue shrouded in mystery. Buxbaum and colleagues stepped up to the challenge by trying to identify other Fe65 interactors. Fe65 has two phosphotyrosine binding modules, the second of which (PTB2) binds APP (Fiore et al., 1995). To get at what might bind the first (PTB1), Yuji Kajiwara, an M.D./Ph.D. student in Buxbaum’s lab, did a yeast two-hybrid screen and pulled out teashirt (Tsh), a Drosophila homeotic protein. Mammals have three Tsh proteins, all of which were found to bind Fe65 in confocal microscopy experiments and immunoprecipitations from primary neuronal cultures, Buxbaum reported at ICAD. Based on the yeast two-hybrid data, he said Tsh3 was the most interesting to follow up, and this protein was used in most of the transcription studies presented subsequently.

In cells transfected with APP-Gal4 and various combinations of tagged Fe65 and Tsh3, the researchers showed that Tsh3 acts as a repressor. Fe65 profoundly activated gene expression by AICD, and Tsh3 knocked it down, Buxbaum reported in Chicago. Tsh3 did not seem to be a general inhibitor of transcription, as it only behaved as a repressor when bound to Fe65. Further experiments suggested that Tsh3’s repressive effects were mediated by recruitment of histone deacetylases (HDAC 1/2)—enzymes that promote gene silencing by removing acetyl groups from core histones, thereby making the associated DNA more compact and less accessible to transcription factors. Fe65 also binds the nucleosome assembly factor SET, and this interaction appears necessary for the transcriptional activation mediated by Fe65 (Telese et al., 2005). SET is a subunit of the inhibitors of acetyltransferases (INHAT) complex, which binds histones and blocks their access to acetyltransferases. Histone acetyltransferases (HATs), which oppose the function of HDACs, promote gene transcription by transferring acetyl groups onto histones, thereby loosening chromatin structure and increasing exposure of the associated DNA to transcription factors. (For a freely accessible review on HATs and HDACs in neurodegeneration, see Saha and Pahan, 2005.) Buxbaum boiled down his take on the proposed Fe65/Tsh/HDAC/SET complex (see figure below) in a phone conversation with this reporter. “You're taking off acetyl groups that are there (HDAC), and you're blocking further addition of acetyl groups (SET),” he said. “It's kind of a double mechanism to make sure the genome is shut down.” 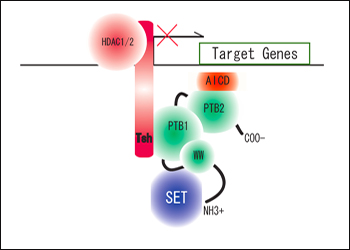 Shifting attention to what this gene-silencing complex might target, Buxbaum and colleagues found a promising candidate—caspase-4—using a macroarray containing several hundred genes enriched for AD-related factors. The macroarray was probed using RNA from human neuroglioma cells stably transfected with Fe65 and Tsh3. In these same cells, the researchers showed that high expression of Fe65 and Tsh3 inhibited caspase expression. Conversely, knocking down expression of Fe65, Tsh3, or both using antisense RNAs led to increased caspase-4 expression, Buxbaum reported. Chromatin immunoprecipitations using nuclear extracts from these cells demonstrated direct physical interaction between Tsh and Fe65 proteins and the caspase-4 promoter.

Do these interactions have anything to do with AD? In Chicago, Buxbaum presented several lines of evidence to support a “yes” claim. First, data from postmortem human brain samples seem to indicate that Tsh/Fe65 and caspase-4 expression are anti-correlated—that is, Tsh3 expression drops while caspase-4 expression rises in early AD. These hundred or so samples came from the Mount Sinai Brain Bank and included controls and varying degrees of disease severity by several measures, including CDR scores and plaque pathology. “Caspase-4 goes from low to maximally expressed as you go from no to some neuritic plaques,” and remains high as disease progresses, Buxbaum said.

The other piece of evidence presented at ICAD to suggest that the Fe65/teashirt interaction is relevant to Alzheimer’s came from a search for Tsh gene variants in AD. Genome-wide scans turned up two AD-associated single-nucleotide polymorphisms (SNPs) in Tsh3 (p-values 0.00525 and 0.0095), and one in Tsh1 (p-value = 0.000205). For both Tsh3-associated SNPs, the risk alleles were associated with reduced Tsh expression, Buxbaum said, adding that separate cohorts will be analyzed to see if these effects—as yet unpublished—can be replicated.

The obvious next step for evaluating caspase-4 regulation by Fe65/Tsh is to analyze this activity in AD mouse models, but there’s a caveat: mice don’t have caspase-4. This could be interesting in and of itself, Buxbaum noted, as it might explain in part why most current AD mice show little neurodegeneration compared with what happens in human disease. Buxbaum’s group is collaborating with Greg Elder, also at Mount Sinai School of Medicine, to make a transgenic mouse containing the entire human caspase-4 gene. Thus far this has proven non-trivial, as the caspase genes are clustered in the human genome, making it hard to cleanly isolate caspase-4 with all its genetic elements. If the researchers succeed in making the humanized caspase-4 mouse, they will cross it to one of the APP-overexpressing transgenic lines. If they see increased neurodegeneration and/or more tau pathology in the caspase-4-expressing APP mice, these animals might serve as better disease models, Buxbaum said, noting recent studies (Colton et al., 2006 and Wilcock et al., 2008) in which knockout of an immune modulator—nitric oxide synthase 2—seemed to make mouse models better at recapitulating human disease (cerebral amyloid angiopathy and AD). Other studies (for example, Pompl et al., 2003) have looked more generally at caspases in AD, showing their expression goes up at the early stages of disease, but these findings are merely correlative. Caspase-4/APP transgenic mice would enable researchers to more clearly address the role of inflammatory caspases in disease progression—for instance, by seeing if the mice are improved by methods that regulate caspase-mediated inflammation.

Teasing Out APP Function in Mice: Knock-ins, Knockouts Galore
Uncovering biological roles for APP has proved challenging in part due to the presence of its close relatives APLP1 and APLP2. Ulrike Müller’s group had shown previously that these proteins in mice have overlapping and non-redundant functions (see ARF related news story). For instance, mice lacking APP survive, but APP/APLP2 double knockouts die after birth, as do mice with both APLP1 and APLP2 genes knocked out. On the other hand, APP/APLP1 double knockouts survive and appear phenotypically normal.

For a more detailed look at APP’s biological function, Müller and colleagues used a knock-in approach whereby they inserted genes encoding proteolytic fragments of APP into the mouse genome precisely where endogenous APP had been knocked out. They generated two lines of knock-in mice—one expressing the secreted APP ectodomain (APPsα) and another expressing a C-terminal truncation lacking the YENPTY motif essential for APP interactions with phosphotyrosine-binding domains of other proteins including Fe65. Based on brain and body weight assessments and various learning and motor tests with these mice, the researchers concluded that the APP C-terminus is dispensable and that APPsα is sufficient to mediate the physiological functions of APP (Ring et al., 2007). They wondered whether APLP2 and APLP1 might compensate for the loss of APP function in the APPsα-expressing knock-in (APPsα-KI) mice. To this end, analysis of APPsα-KI/APLP2-KO mice was described in the ICAD poster by first author Sascha Weyer and colleagues.

As it turns out, expression of APPsα rescued the postnatal lethality of the APP/APLP2 double knockouts. Sixty percent of the new mice, which lack APLP2 and express no full-length APP but only its secreted ectodomain, survived into adulthood. This finding was reported last year (see ARF SfN meeting report) and with expanded analysis at ICAD. The surviving mice had motor impairments by several tests including grip strength analysis, open field, rotarod, and beam walking. The researchers also found some neuromuscular junction abnormalities—fragmented post-synaptic acetylcholine receptor clusters that were associated with increased frequency and amplitude of spontaneous miniature endplate potentials—in APPsα/APPsα APLP2-/- mice, compared with APPsα-/+ APLP2-/- animals. The authors conclude that APPsα is important for muscle function through interaction with cell-surface APP interactors. Though these interactions may play a role in ensuring survival, the remaining deficits would seem to indicate that the APP C-terminus—which binds Fe65 and other cytoplasmic proteins—could still mediate key APP functions.—Esther Landhuis.