Anti-microRNA therapy has been tested for conditions including hepatitis, stroke, and cancer (Janssen et al., 2013; Buller et al., 2010; Abba et al., 2012), but Koval believes she is the first to try it for a neurodegenerative condition. Anti-miRNA oligonucleotides work a bit differently than standard antisense molecules aimed at much larger mRNAs. While the latter destroy the mRNA target, anti-microRNAs simply bind to their targets, preventing them from interacting with the mRNAs they regulate. Koval and Miller collaborated with Regulus Therapeutics of San Diego, a spinoff of Isis Pharmaceuticals of Carlsbad, California. Isis develops traditional anti-mRNA treatments, including an antisense therapy for the ALS gene superoxide dismutase 1 (SOD1) in collaboration with Miller and others (see May 2013 news story). Regulus focuses on anti-microRNAs.

At the start of the project, Koval and colleagues predicted that microRNAs would be dysregulated in ALS, and that correcting the dysregulation might help. Using microarrays, she identified 12 microRNAs that were upregulated in mouse and rat models of ALS, compared to control animals. Of these, six were also upregulated in the spinal cords of people who had died of ALS, according to Koval’s analysis of autopsy tissues. No microRNAs were significantly downregulated. Koval chose to focus on miR-155 first, because levels were doubled in spinal cords from people who had either familial or sporadic ALS, indicating a common problem. Researchers already knew that MiR-155 promotes neuroinflammation (O’Connell et al., 2010), a key feature of ALS pathology (see Boillée et al., 2006; Sep 2008 news story), and Regulus already had an antisense molecule ready to evaluate in animals.

MiR-155’s targets include mRNAs for these genes:

Because the blood-brain barrier prevents microRNAs from entering the central nervous system (CNS), Koval delivered a constant stream of anti-miR-155 directly into mouse brain lateral ventricles using a micropump. Tracking the fluorescently labeled oligonucleotide, she saw that it entered neurons and glia throughout the brain and spinal cord of wild-type mice (see figure below). She also confirmed that the two-week treatment derepressed miR-155 target mRNAs; levels of SHIP1, PU.1, CARD11, and CYR61 mRNA all rose. 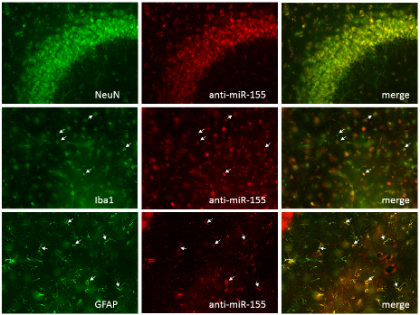 “It is fantastic how well these things get into the nervous system,” commented Peter Nelson of the University of Kentucky in Lexington, who was not involved in the work. “Anti-microRNA provides such a ready opportunity for treatment.” Nelson speculated that neurons might take up the oligonucleotides by some sort of active mechanism.

Next, Koval tried the anti-miR-155 treatment in an ALS mouse model that expresses mutant human SOD1. She was uncertain if cells in the CNS, peripheral immune cells infiltrating the CNS, or both might be involved in any possible benefits. Notably, peripheral macrophages undergo activation in ALS (see Nov 2009 news story). To maximize her chances of treating the disease, Koval combined administration to the brain lateral ventricles with weekly peripheral injections. She began treatment when the mice were 60 days old, about 40 days before symptoms of disease—weight loss and paralysis—normally emerge. Disease onset was unchanged, but the treated mice lived 10 days longer than untreated controls, surviving to an average of 139 days. This may seem a short reprieve, but for mSOD1 mice it was comparable to results obtained with other treatments, such as SOD1 antisense therapy (see Jul 2006 news story).

Koval and Miller are now investigating precisely how blocking miR-155 increases lifespan. The immune system’s role in the disease has proved to be complex, with both positive and negative effects (see Sep 2009 news story; Oct 2008 news story; Henkel et al., 2009). Koval speculated that the treatment dampens inflammatory processes that would otherwise exacerbate the disease. “It is presumably just a way of treating inflammation in the nervous system,” agreed Nelson. Therefore, the treatment would be unlikely to halt disease in people but might slow it down, Miller said. While researchers cannot directly correlate life extension in mice to that in humans, Miller hopes that an anti-miR-155 therapeutic would offer more than the extra few months people get from taking riluzole, currently the only approved treatment for ALS.

The Miller lab and Regulus are not headed for the clinic just yet. Toxicology work remains, and Koval needs to determine whether peripheral or CNS treatment, or both, explains the benefits. A peripheral treatment would be more convenient in the clinic, though Koval noted that researchers are making excellent progress with intrathecal delivery of antisense treatments directly to the CNS (see Mar 2011 news story; Jan 2013 news story).—Amber Dance