When 2,711 scientists from 68 countries around the globe gathered in the beautiful Catalan capital of Barcelona, Spain, on 9-13 March 2011 for the International Conference on Alzheimer’s and Parkinson’s Diseases (AD/PD), the buzz they generated during five packed days of talks, discussion, and socializing was remarkable for how it sounded opposing notes at equal volume. Distressed about a decade of trial failures in Alzheimer’s disease, a growing number of scientists across the field voiced doubt about the power of the amyloid hypothesis. Ezio Giacobini of Southern Illinois University School of Medicine, Springfield, spoke for many when he asked, “Is Aβ42 the best therapeutic target? There is a great question about this in our minds now, even if we do not want to state it openly.” Other scientists counseled patience at a time when second-generation therapeutics are in the clinic and biomarkers are making more focused trials feasible. “Cholesterol was discovered in 1890, insulin in 1920. Aβ in brain was discovered in 1984 and circulating in body fluids in 1992, Aβ protofibrils in human AD brain in 2008 and in human CSF in 2010. I want to give some optimism to the field. It is very difficult to develop CNS drugs, but it will happen,” said Lars Lannfelt of Uppsala University in Sweden. Anti-amyloid approaches continue to multiply, but industry is clearly looking for alternatives as well. The call for combination therapies issued loudly from the lectern many times, as did calls for intervening earlier in the disease when the brain is less damaged.

Behind the front lines of clinical research, meanwhile, basic and translational researchers displayed a burgeoning of ideas, and in the process, they openly presented plenty of new, unpublished data. Innate immunity, a strengthening connection between α-synuclein and tau, in-vivo metabolism of pathogenic proteins, and mechanistic studies of risk genes ranging from clusterin to LRRK2 and GBA were prominent themes. So were the important but poorly defined cognitive deficits in Parkinson’s, biomarkers for dementia with Lewy bodies, and experimental therapies across the AD-PD spectrum.

After its initial, modest beginning in 1985 in Israel, this 10th AD/PD Conference has grown to feature 1,520 abstracts. Abraham Fisher of the Israel Institute for Biological Research in Ness-Ziona organizes it, along with Israel Hanin of the University of Arizona, Roger Nitsch of the University of Zurich, Switzerland, and Manfred Windisch of the contract research organization JSW-Research Ltd. in the Austrian city of Graz. AD/PD visits a different European country every other year, using local scientists to help host the program. This year, Jesus Avila of Universidad Complutense de Madrid represented Alzheimer’s and Jaime Kulisevsky of the Hospital de la Santa Creu i Sant Pau, Barcelona, represented Parkinson’s disease.

In the opening ceremony, Ibrahim Ferrer of Universitat de Barcelona placed Spanish dementia research into the context of that country’s turbulent history. The great master Francisco Goya frequently portrayed age and madness. Some of his works are likely to have featured people with dementia, Ferrer said, for example, the painting Viejos Comiendo Sopa. 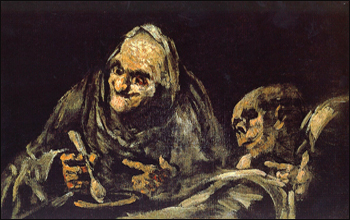 The artist Salvador Dali had parkinsonism, Ferrer said, though in his case it could have partly been a secondary consequence of Dali’s habit of self-medicating his tremor. As for research, Ramon Y Cajal developed his seminal neuron doctrine while living in Barcelona for five years, but then moved to Madrid. “He made major contributions to neuroanatomy at the University of Barcelona, but was not recognized as an important scientist. His stay here was not that happy,” Kulisevsky told the audience. “Cajal knew about Alzheimer’s work, but was not interested in diseases,” Ferrer noted. In the past century, the Spanish Civil War and its aftermath set back Spanish science, though the dictator Francisco Franco died of Parkinson’s and the first president of the democratic period, Adolfo Suárez, developed Alzheimer’s.

The AD/PD Conference is popular with young scientists, who respond to added incentives ranging from the financial to the social and the culinary. Each invited speaker can bring a student without paying registration. The conference this year awarded 22 cash prizes to junior researchers, who are listed with photos on the AD/PD 2011 website. AD/PD serves snacks and lunch daily. Researchers, therefore, don't venture away from the conference center in search of food, but tend to stay together and talk science. Generous helpings of paella, croquettes, and cured meats helped students live on a shoestring; 540 of them attended the conference, according to Fisher. AD/PD 2011 offered daily networking sessions where students and young scientists could meet principal investigators. The first day kicked off with a Flamenco dance performance at the conference center. Diehards who had the stamina for an evening at the center after a relentless 8:30 a.m. to 7:10 p.m. scientific program could avail themselves of a free concert with local singers one night, and a ticketed dinner party featuring a rock band that kept the dance floor crowded until midnight on the last night. “As a new investigator in PD, I had an exceptional experience attending the AD/PD Conference in Barcelona,” Jinhua Zhang of the University of Alabama in Birmingham, wrote to Alzforum (see full comment below).

Fun aside, what were the major scientific themes? Taking stock on the last afternoon of the meeting, Bengt Winblad of Karolinska Institutet, Stockholm, said that Phase 3 trial failures reinforced that late-onset Alzheimer’s is a heterogeneous disease. This was a commonly heard sentiment. Viewed that way, the standard randomized controlled Phase 3 trial is arguably set up to fail. For one, it treats a clinically diagnosed group of patients who bring a mix of uncharacterized pathologies into the trial as if they were all the same. The conference featured numerous sessions on trying to disentangle mixed disease and defining markers for the various dementing and movement disorders that fall under the AD/PD umbrella.

For another, the single-target approach, e.g., only anti-amyloid, only NSAID, only Dimebon, may be too weak to make much difference. “The field is shifting from the one-protein-one-target-one-drug-approach to a multi-target approach. We should look for combination drugs. We could have formulations that contain two or more ingredients, or single compounds that have a selective polypharmacology,” Winblad says. Combination therapy to date means testing approved drugs together, and in the case of AD, two modest drugs, such as a cholinesterase inhibitor and memantine, still add up to a weak therapy. To be fair, regulatory agencies have discouraged simultaneous testing of unapproved investigational therapies in the past. The U.S. Food and Drug Administration has recognized the stalemate, however, and last December issued guidance encouraging scientists to begin doing exactly that (see on Google Docs).

Finally, Phase 3 trials can sink under the weight of center-to-center variability that drowns out whatever small signal a trial’s outcome measures might otherwise have yielded. “Europe alone has 27 countries with different cultures and different languages, where scales need to be validated,” Winblad said. He urged the field to publish negative studies and side effects quickly and to improve collaboration among regulatory, pharma, and academic researchers for the greater good.

The idea of both Alzheimer’s and Parkinson’s being diseases of networks also echoed throughout the conference. Scientists are grappling with the idea that disease results from a breakdown of dysfunctional networks more than from a linear disease process. In the case of AD, scientists said, APP processing, tau hyperphosphorylation, microglial activation, and oxidative stress intertwine with aging processes. How a given person ages is marked by infectious and other environmental influences as well as by a lifetime of epigenetic responses. This adds complexity, but also potential drug targets. Late-onset AD derives to a significant degree from environmental risk factors, said Christine van Broeckhoven, University of Antwerp, Belgium. Even the risk genes that have been identified in LOAD suggest as their modus operandi a role in innate immunity and a person’s ability to respond to infection, said Rudolph Tanzi. As such, they might act early in life and set the stage for neurodegenerative disease later.

Systems complexity is difficult to study, but scientists now are tackling interacting and dysregulated networks at different levels of analysis. For example, Lawrence Rajendran of the University of Zurich presented a cell-based screening approach that allows his group to knock down by RNAi each one of a given group of genes—every kinase, say, or every phosphatase in the human genome—and systematically catalogue its effect on APP processing as a core factor in AD pathogenesis. For example, the scientists silenced each of the body’s 1,270 kinases. In the process, they fingered Cdk5 as a master regulator of Aβ production through β-secretase, confirming a paper by Karen Duff (Wen et al., 2008). Akt1 and 2 affected APP processing at the γ-secretase level, and combined screens affected production of both Aβ and tau. “Alzheimer’s is not a cascade. It is more like what is behind your watch, with Aβ being one wheel in a complex machine. An FAD mutation can have a great impact on the machine, but in late-onset AD it is more multifactorial,” Rajendran said. At the level of mouse electrophysiology, Lennart Mucke’s and other labs presented their studies, closely covered on Alzforum, of how Aβ and tau dysregulation affect synaptic transmission, leading to dampened firing from inhibitory interneurons and an increase in hypersynchronous network activity and seizures (e.g., ARF related news story; Palop et al., 2011). And at the human level, Reisa Sperling of Brigham and Women’s Hospital, Boston, and others talked about how multimodal imaging is beginning to visualize the way in which functional connectivity networks are gradually being degraded as aging people accumulate pathology in their brain (for detailed ARF coverage, see ARF Miami series). Here is how Barry Greenberg of University Health Network, Toronto, Ontario, summed up the challenge. “These are diseases of networks, with slightly overlapping nodes in the different diseases. The neuronal networks are the substrates of the diseases, and they are what we should work on.”

Other ideas that have been around for some time bubbled more prominently to the surface at AD/PD 2011. For example, there is now considerable consensus that APP and presenilin mouse models simulate the pre-dementia stage of AD; hence, they might predict treatment success better at that stage than at the mild to moderate stage. Biomarkers carry great hope of improving trial outcomes, but it is important to remember that despite accelerating research in this field, at this point, no phase trial has as yet robustly coupled a biomarker effect with a desirable cognitive outcome. Just as biomarkers are being standardized and qualified for use—at considerable cost—in treatment trials at earlier stages of AD, a disquieting debate has arisen in the wake of an inconvenient paper by Lon Schneider at the University of Southern California, Los Angeles. It challenges the common assumption that Aβ42 biomarkers will improve prodromal trials (Schneider et al., 2010), and opinions about it could be heard in the hallways and in scientific talks.

In the field of PD, the conference showed that AD and PD have much in common, Winblad said. PD researchers are focusing on better understanding the cognitive component of what is now known to be a disease affecting many parts of the nervous system, including the digestive system, the heart, and perhaps even the skin. In the process, they are grappling with the entire spectrum of overlapping Lewy body diseases, and many such presentations were on display at AD/PD 2011. Like in AD, the PD field is racing to define early biomarkers; in PD that means pre-motor markers that precede the current clinical diagnosis. For a regulatory perspective on PD compared to AD, see the next AD/PD story.—Gabrielle Strobel.