Last month in Washington, D.C., while U.S. political pundits eyed presidential hopefuls, researchers at the Alzheimer’s Association International Conference (AAIC) were scrutinizing neurogranin, a synaptic protein found in cerebrospinal fluid. At the meeting, held July 18-23, new data corroborated and extended earlier reports that neurogranin levels climb in the CSF of people with AD as well as in those with mild cognitive impairment, sparking enthusiasm about the protein's potential as a diagnostic and prognostic biomarker of AD.

AD research has been helped enormously by the availability of biomarkers for amyloid accumulation and neurodegeneration, and many hope a marker for synapse loss might provide additional information on the pathological progression of this disease. Neurogranin first surfaced as a potential biomarker a few years ago, when Kaj Blennow and colleagues at the University of Gothenburg, Sweden, analyzed CSF samples by western blot and found higher levels of the protein in AD patients than in healthy controls (Thorsell et al., 2010). More recently, aided by the development of new quantitative immunoassays, Blennow, Eugeen Vanmechelen at ADx NeuroSciences, Ghent, Belgium, and others, observed an uptick of neurogranin in the CSF of people with mild cognitive impairment (de Vos et al., 2015). Moreover, high neurogranin levels in MCI subjects predicted progression to AD (see Jan 2015 news).

Neurogranin, a post-synaptic protein enriched in dendritic spines, is believed to leak out into CSF as synapses in the brain degenerate. “The assumption has been that it reflects passive neurodegeneration,” said Anne Fagan, Washington University, St. Louis. “But we do not know yet if what we are seeing reflects neurodegeneration or some other mechanism.”

At AAIC, Fagan shared data from the largest cohort assessed for neurogranin thus far, more than 300 people with AD and healthy controls from WashU. Using a neurogranin immunoassay developed at WashU by Jack Ladenson, Fagan's team observed high levels of CSF neurogranin in people with various degrees of cognitive impairment. Compared with healthy controls, people with very mild AD (CDR 0.5) and those with mild and moderate dementia (CDR 1 and 2, respectively) had more neurogranin in their CSF (2,020 pg/mL in mild AD versus 1,470 pg/mL in controls). Furthermore, among healthy controls (CDR 0), high baseline levels of neurogranin nearly tripled the risk of progressing to cognitive impairment within two to three years. Risk jumped to 11-fold in those who also had low CSF Aβ42.

"It's important to note that these were cognitively normal folks," Fagan said. "These were not people with very mild AD that progressed to dementia, but those with a CDR of zero at baseline who progressed to AD dementia within the follow-up period."

These results suggest that neurogranin levels in CSF may start to rise very early in the disease process, prior to cognitive symptoms. This is consistent with postmortem studies showing that synapse loss is well underway by the time individuals develop MCI (Scheff et al., 2007).

Although the trajectory of CSF neurogranin awaits thorough longitudinal characterization, at AAIC researchers received their first glimpse into neurogranin’s behavior over time. Charlotte Teunissen, VU University Medical Center, Amsterdam, tested CSF in 163 participants from the Amsterdam Dementia cohort. This study included people with AD (n=65), MCI (n=61), as well as a cognitively normal group (n=37), the latter comprised mainly of individuals with subjective memory complaints (n=31). All participants provided two CSF samples an average of two years apart and were followed clinically for about four years. In keeping with other studies, baseline neurogranin levels were higher in the AD and MCI groups than in the cognitively normal group. High baseline neurogranin nearly doubled the risk of progressing from MCI to AD, comparable to the predictive power of core biomarkers such as Aβ42, total tau, and phospho-tau181. 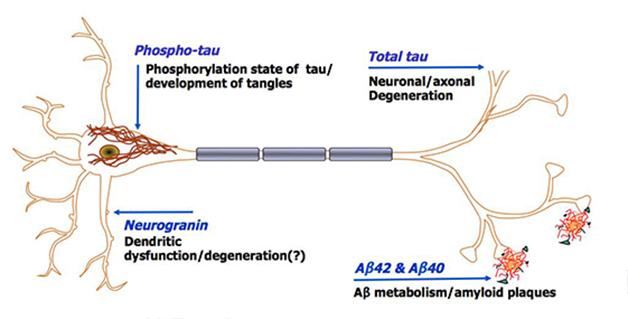 As a putative indicator of synaptic loss, would CSF neurogranin correlate with a decrease in brain volume or other signs of atrophy?  Several groups are now investigating this possibility. At AAIC, Harald Hampel and colleagues at the Pierre and Marie Curie University, Paris, reported that levels of neurogranin in CSF negatively correlated with total white-matter volume in the brain, but had no association with hippocampal volume. In this pilot study, first author Simone Lista analyzed a cohort of 10 AD patients and 12 people with prodromal AD. “These preliminary results suggest neurogranin is a promising biomarker reflecting atrophy of brain white matter in AD dementia,” Lista wrote to Alzforum.

A study in press by Erik Portelius and colleagues at the University of Gothenburg, Sweden, bolsters the correlation between CSF neurogranin and structural brain changes. "We found significant associations between high CSF neurogranin at baseline and increased rate of hippocampal atrophy, as well as reductions in cortical glucose metabolism,” Portelius wrote to Alzforum. “There is now overwhelming evidence supporting CSF neurogranin as a biomarker for synaptic pathology in Alzheimer's disease.”

Wellington, who won the best poster presenter in the Diagnosis and Prognosis theme, attributes neurogranin’s specificity for AD to both its pattern of expression in the brain as well as the magnitude of synaptic loss in the AD brain. “Neurogranin is enriched in brain regions highly affected by AD, such as the hippocampus and cerebral cortex,” she said, “And, in AD there is more widespread synaptic loss, not restricted to one or two specific areas, as in PD.”

AAIC attendees found the new neurogranin results encouraging. However, some wondered what, if anything, neurogranin adds to the existing biomarker toolkit, noting that established biomarkers like CSF Aβ42 and total tau are also elevated in AD patients compared with healthy people and associate with progression from MCI to AD (see, for example, Hansson et al., 2006; Fagan et al., 2007). Multiple studies have now shown that levels of CSF neurogranin in AD patients strongly correlate with levels of total tau in CSF, a finding further corroborated in the WashU and Amsterdam Dementia cohorts, according to Fagan and Teunissen. “Given the correlation with total tau, it will be interesting to see if neurogranin can add additional information,” said Markus Otto, University of Ulm, Germany, who was not involved in the studies.

Blennow pointed out that levels of phospho-tau also correlate very well with total tau in AD patients and controls, but nevertheless the two markers provide distinct information about tangle-load and neurodegeneration, respectively. “So, even if neurogranin and total tau show similar increases in AD, they may tell us different things or could be used in different ways,” he said.

Given that synapse loss correlates better with cognitive decline than tau or amyloid pathology (Terry et al., 1991), one possible future application for CSF neurogranin is as a surrogate endpoint in clinical trials. This may seem a distant goal, but at AAIC, Diane Stephenson, co-director of the Coalition Against Major Diseases (CAMD), announced that CAMD had recently singled out CSF neurogranin as a promising fluid biomarker for use in clinical trials.

“When we surveyed the biomarker landscape, neurogranin, along with tau PET, rose to the top as having the potential to meaningfully advance drug development,” said Stephenson. CAMD is an initiative of the Tucson, Arizona-based Critical Path Institute (C-Path), which brings together industry and academic scientists to speed therapy development for neurodegenerative disease, in part by promoting standardized assays and protocols. Last May, CAMD recommended CSF neurogranin, along with tau PET, to the FDA in response to an open request for biomarker nominations. According to Stephenson, “The purpose of the recommendation was to get everyone on the same page so that when these markers are ready for prime time they can be employed in pivotal clinical trials.”

In the meantime, there is much to be learned about neurogranin, starting with what exactly is being measured in CSF. The majority of studies thus far have used ELISAs to detect neurogranin, but this type of assay does not distinguish between full-length proteins and peptide fragments. Last year, a mass spectrometry study indicated that the vast majority of neurogranin in CSF comprised not intact protein, but C-terminal fragments of varying lengths. One fragment in particular, amino acids 48-76, was enriched in CSF of AD patients compared with healthy controls (Kvartsberg et al., 2014). At AAIC, Hlin Kvartsberg, a student at the University of Gothenburg, compared neurogranin peptides in CSF with those found in brain tissue, specifically in parietal lobe samples from 10 AD and 10 control cases. Using hybrid immunoaffinity mass spectrometry (HI-MS), a meld of antibody-based purification and MS, she detected more than 70 neurogranin peptides in the brain. The reason for this heterogeneity is unknown. “Our theory is that as synapses degenerate, the protein becomes available to a variety of proteases in the brain,” said Kvartsberg.

Kvartsberg had also previously characterized neurogranin peptides in plasma and found a very different set of peptides than she observed in the brain and CSF. She said that the plasma signal likely derives from peripheral sources of neurogranin, such as blood cells, and that plasma neurogranin is not associated with AD (Kvartsberg et al., 2015; de Vos et al., 2015).

“There appears to be two separate neurogranin pools with only very minor or no exchange between them,” said Kvartsberg. “A CNS pool, comprising brain and CSF neurogranin with very similar peptide profiles, and a peripheral pool, as measured in plasma.”

Very little is known about the life cycle of neurogranin in the brain, including how it is metabolized, and why the protein is detectable in CSF. “We now need to understand the mechanism of release of neurogranin and determine if it is in fact reflecting neurodegeneration and dendritic loss, or perhaps more subtle synaptic dysfunction, or even a change in the regular turnover of the protein,” said Zetterberg.

A plethora of peptides. A variety of C-terminal fragments, but no intact neurogranin, can be detected in CSF. Four peptides (green) are also found in brain extracts. The 48-76 peptide (asterisk), is common to both, and is present at higher concentrations in the CSF of AD patients. [Courtesy of Hlin Kvartsberg.]

In today’s biomarker field, neurogranin is not the only synaptic protein in the running. The presynaptic protein SNAP-25 is also elevated in the CSF of AD patients (Brinkmalm et al., 2014). At AAIC, Fagan reported  higher SNAP-25 CSF levels in people with AD compared with healthy controls, among a cohort from the Alzheimer’s Disease Neuroimaging Initiative (ADNI). CSF SNAP-25 also ran higher in MCI subjects, particularly those classified as amyloid-positive due to low CSF Aβ42. Fagan noted these data are preliminary and from a comparatively small number of individuals (152), but nevertheless indicate that disruptions to synaptic integrity are detectable very early in the disease process.

“A year ago, when I was asked to prepare this talk about synaptic biomarkers, I thought it was going to be a five-minute presentation,” Fagan said, “But in the meantime we and others have done a lot of work on candidate markers such as neurogranin and they are shaping up to be very interesting.”—Kelly Dakin