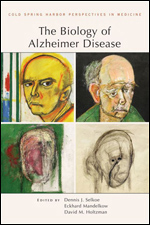 16 March 2012. Anyone following the primary literature on Alzheimer's disease research knows that keeping abreast of this rapidly evolving field has become a Herculean task. More and more data are being published on ever-diversifying lines of research, and they are not made any clearer by discrepancies among studies and debate about what is important. It’s a challenge for newcomers and Alzheimerologists alike to see the big picture of what has been learned and where the field is heading. A new book titled The Biology of Alzheimer Disease, published in 2012 by Cold Spring Harbor Laboratory Press, attempts to help with that.

Edited jointly by Dennis Selkoe of Brigham and Women’s Hospital in Boston, Eckhard Mandelkow of Deutsche Zentrum für Neurodegenerative Erkrankungen/CAESAR Research Center in Bonn, Germany, and David Holtzman of Washington University School of Medicine, St. Louis, Missouri, the book's 500 pages organize current knowledge on AD research into 23 topical reviews. These appear sandwiched between an introductory chapter on where the field came from and what motivates researchers today, and a closing chapter that envisions how far today’s knowledge may propel the field over the course of the next decade toward its goal of preventing and halting Alzheimer’s disease.

The editors and authors address a broad audience of people from across biomedical research, particularly students and junior researchers, but also investigators in related fields of science and those with a passing interest in Alzheimer’s. Priced at $135.00, the book itself appears destined for libraries and laboratory copies more than for purchase by students. However, 15 of its 25 chapters are already freely available for download at the new website, Cold Spring Harbor Perspectives in Medicine, where they were published as individual reviews starting in October 2011. Over the coming months, the remaining chapters will be uploaded there, too, according to Richard Sever of Cold Spring Harbor Laboratory Press. The lure of free content notwithstanding, the whole book offers more than parts read in isolation. The total collection stands out for pulling together a broad swath of leading scientists internationally to work toward the shared goal of articulating what is the agreed-upon state of the art in their area.

For each topic, the editors recruited two or three principal investigators as coauthors. This happened some two years ago, Selkoe said in an interview with ARF. These authors, most of whom sometimes compete in the same area of AD research and may jostle for primacy in publications, grant support, and original discoveries, would have to set aside professional rivalry. They had to agree on which are the important contributions, decide which papers had best stood the test of time, and distill their respective viewpoints into one narrative of the overall understanding gained to date.

This was, at times, a cumbersome process, Selkoe said. Some designated coauthors initially disagreed on how to phrase a discovery or its relative importance and struggled with synthesizing their views. In a few cases, the intended melding of the minds simply did not come to pass. “But in the end, it worked out for most chapters, and the final product shows just how much detailed knowledge has been established beyond a reasonable doubt,” Selkoe said.

For example, the chapter on presenilins is the co-production of Bart de Strooper, Takeshi Iwatsubo, and Michael Wolfe, three leaders on the structure and function of γ-secretase who at times advanced nearly identical lines of investigation in their separate labs in Belgium, Japan, and the U.S. The chapter on trafficking and processing of APP is headed jointly by Christian Haass and Sangram Sisodia, who have held diverging positions on this topic in the past, as well as junior researchers who have since established their own labs and perspectives. The chapter on physiological functions of APP comes from Ulrike Mueller and Hui Zheng, who have published independently on that topic. The chapter on neuropsychology comes from Sandra Weintraub and David Salmon, and the one on inflammation from the joint pens of Tony Wyss-Coray and Joe Rogers. For his part, Selkoe wrote the chapter on Aβ biochemistry together with his friend, but also competitor, Colin Masters. “Colin scooped me in 1985, when he published his first paper on Aβ isolation while I was still writing my own manuscript. Still, we happily wrote this chapter together,” Selkoe said. Holtzman coauthored a chapter on ApoE with Joachim Herz and Guojun Bu.

The 23 topical chapters range from the clinical, pathological, and epidemiological level to a detailed chapter on the frontotemporal dementias and their relationship to AD, and from there on to genetics and the extensive molecular biology of the players implicated in AD. Brain imaging and mouse models are covered. A majority of chapters focus on APP, Aβ, tau; others deal with neurovascular aspects of AD, ApoE, and the ubiquitin-proteasome and autophagic-lysosomal systems. One chapter summarizes current knowledge on biomarkers, and three more synthesize the status of therapeutic research.

In toto, the book shows that researchers across the field agree more often on what is true than is sometimes portrayed. “There is more ecumenicism in the field than we are given credit for,” Selkoe said. For example, lines that formerly separated scientists interested in Aβ or tau have long since blurred, as both proteins are recognized as key players in AD, and many labs have come to study both. Neuroinflammation has become an active area of investigation in Alzheimer’s and other neurodegenerative diseases. The general expansion of the field and scientists’ appreciation for the complexity of the disease’s long pathogenesis both have created room for many ideas to be true and important, Selkoe said.—Gabrielle Strobel.