With so many technological advances that allow a peek inside the brain, it can be hard to keep track of the latest and greatest ways to apply imaging to the study of Alzheimer's disease. A supplement just published by the Journal of Alzheimer's Disease aims to bring the community up to speed on emerging trends in imaging techniques now used in the study of AD. Called "Imaging the Alzheimer Brain," the issue details ways people can use imaging to help understand, detect, diagnose, and track the disease.

"It brings together the latest thoughts on imaging—one of the hottest areas in Alzheimer's disease," said George Perry at the University of Texas at San Antonio, who is JAD’s editor-in-chief. "The amount of innovation in this area over the last few years is just incredible."

The supplement begins with an overview of the use of imaging for the study of Alzheimer's. Then follow 31 original articles that explore recent advances in imaging modalities, longitudinal measures for tracking AD, measuring cerebral blood flow, metabolism, amyloid plaques, and neurofibrillary tangles. For example, one article describes how diffusion tensor imaging is being used to search for new biomarkers for Alzheimer's. Another reviews current knowledge and future possibilities for using florbetaben as an Aβ-targeted PET tracer. 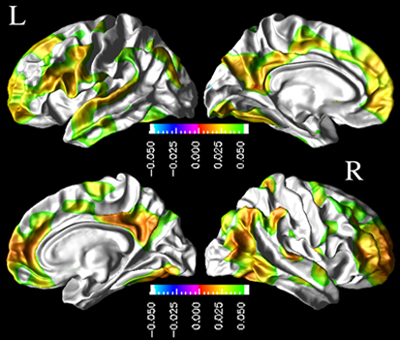 "Alzheimer's disease is becoming the disease of the twenty-first century," said IOS guest editor J. Wesson Ashford of the Veteran Affairs Alzheimer's Research Center, Palo Alto, California. "If we can find ways to image it more effectively, that might lead to ways of treating or preventing it."

All of these articles appeared previously in a handbook published in July by IOS Press, called Handbook of Imaging the Alzheimer Brain. The book compiled previously published JAD articles along with these 31 new ones. Each underwent a separate review process to be included in this journal supplement. More information is available on the JAD website.

A recently published book by Nick Fox, University College London, U.K., and colleagues guides physicians who use imaging to diagnose and distinguish between different forms of dementia. Fox's book organizes established imaging practices into a step-by-step guide that aims to help identify a type of dementia, while the new supplement is a collection of articles that details newly emerging techniques. For more information on that book, see Alzforum’s book review of Neuroimaging in Dementia (see ARF related news story).—Gwyneth Zakaib.